Why Accuracy about Wikileaks Matters

Let me preface this post by saying that I’m perfectly willing to accept that Julian Assange is a narcissist, accused rapist, destructive hypocrite serving as a willful tool of Russia. I’m also happy to concede that his role in publishing the DNC and Podesta emails may have played a significant part in getting Donald Trump elected (though I think it’s down the list behind Comey and Hillary’s own (in)actions). Please loathe Julian Assange–that is your right.

But please, also, try to be accurate about him and Wikileaks.

There have been two funny claims about Wikileaks since the leak of hacked emails from Emmanuel Macron associates was announced on 4Chan on Friday. First, analysis of how the hashtag #MacronLeaks spread emphasized that Wikileaks got more pickup than right wing propagandist Jack Posobiec or the other right wing promoters of it.

The most important surge came when WikiLeaks began tweeting the hashtag. The tweet itself was cautious, pointing out that the leak “could be a 4chan practical joke,” but it was retweeted over 2,000 times, compared with over 600 times for Posobiec.

Yet people have taken that to suggest that everyone who shared Wikileaks’ links to the materials were themselves promoting the emails positively. That is, they ignored the extent to which people share Wikileaks tweets critically, which itself added to the buzz about the dump. The surge in attention, in other words, was in part critical attention to what Wikileaks was doing with respect to the leak.

More troubling, still, outlets including NPR claimed that Wikileaks posted the documents (it has since issued a correction).

Finally, there are absurd pieces like this which, after babbling that, “Macron, by contrast, is favored by those who want … a France looking to the future rather than clinging to the fearful and fictional nostalgia promulgated by Le Pen,” states,

Literally at the 11th hour, before the blackout would silence it, the Macron campaign issued a statement saying it had been hacked and many of the documents that were dumped on the American 4Chan site and re-posted by Wikileaks were fakes.

On top of being poorly edited — Macron’s statement said nothing at all about who dumped the documents — the claims as to both 4Chan and Wikileaks are not technically correct. The documents weren’t dumped on 4Chan, a post on 4Chan included a link to a Pastebin with them. More importantly, Wikileaks didn’t “re-post” them, though it did post magnet links to them.

The importance of the distinction becomes evident just two paragraphs later when the article notes that some of the tweets in which Wikileaks linked to the documents described the vetting process it was undertaking.

Meanwhile, Wikileaks jumped on the document dump, but didn’t seem to be familiar with the material in it. Responding to the Macron statement that some of the items were bogus, Wikileaks tweeted, “We have not yet discovered fakes in #MacronLeaks & we are very skeptical that the Macron campaign is faster than us.”

Curiously, the article doesn’t link to WL’s first tweet, posted less than an hour after the 4Chan post, which said it could be a 4Chan practical joke. 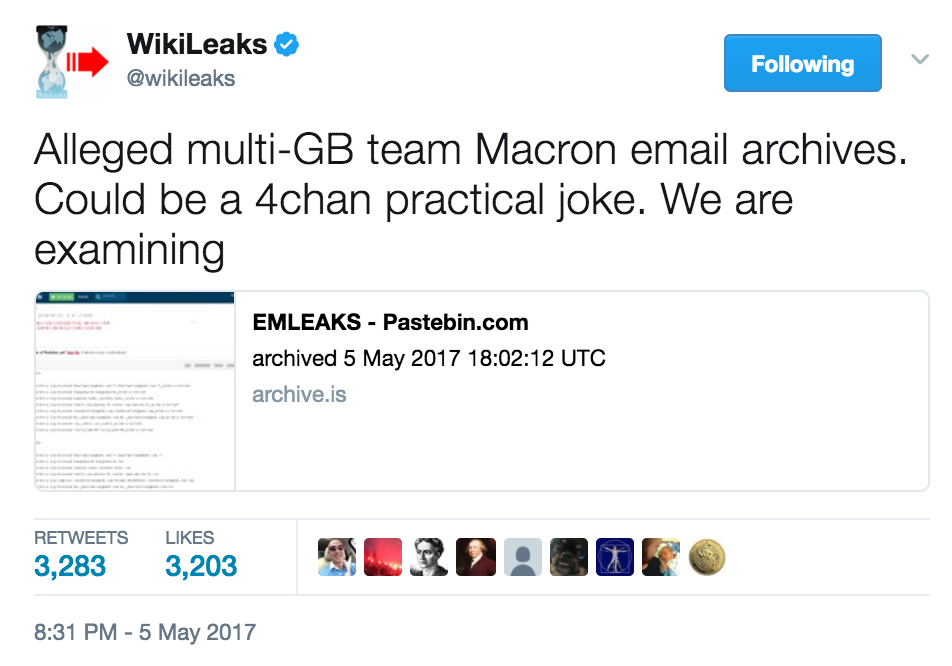 In any case, contrary to what some idiotic readings of this article claim — that Macron succeeded in fooling Wikileaks — in fact, Macron has not succeeded, at least not yet, because Wikileaks has not posted the documents on its own site (Wikileaks could yet claim it had determined the documents to be real only to have Macron present proof they weren’t). Indeed, while Wikileaks expressed skepticism from the start, one thing that really raised questions for Wikileaks was that Macron so quickly claimed to have determined some were fake.

Plus, it’s not actually clear that Macron did fool the hackers who passed them onto the 4Chan source. Here’s the full description from Mounir Mahjoubi, the head of Macron’s digital team, on what their counteroffensive looked like.

“We also do counteroffensive against them,” says Mahjoubi.

“We believe that they didn’t break through. We are sure of it,” said Mahjoubi. “But the only way to be ready is to train the people. Because what happened during the Hillary Clinton campaign is that one man, the most powerful, [campaign chairman] John Podesta, logged on to his [fake] page.”

To keep the entire Macron campaign aware of such dangers, Mahjoubi said, “Every week we send to the team screen captures of all the phishing addresses we have found during the week.” But that’s just the first phase of the response. Then the Macron team starts filling in the forms on the fake sites: “You can flood these addresses with multiple passwords and log-ins, true ones, false ones, so the people behind them use up a lot of time trying to figure them out.”

But now, between the Daily Beast’s gloating and the sharing of it with even less factual gloating, coupled with Macron’s quick declaration that the dump included fake documents, raises real (but potentially unjustified!) questions about whether the campaign added the Cyrillic metadata that got so much attention. Not only has Wikileaks’ vetting process not (yet) been exposed as a fraud, but the reporting may create even more distrust and uncertainty than there was. [Note, I posted a tweet to that effect that I have deleted now that I’m convinced there’s no evidence Macron faked any documents.]

Moreover, even if it is the case that GRU hacked Macron and Wikileaks would have happily published the emails if they passed its vetting process (which are both likely true), Wikileaks didn’t get and post the documents, which itself is worth noting and understanding.

In other words, some inaccuracies — and the rush to gloat against Wikileaks — may actually have been counterproductive to the truth and even the ability to understand what happened.

And this is not the only time. The other most celebrated case where inaccurate accusations against Wikileaks may have been counterproductive was last summer when something akin to what happened with the Macron leak did. Wikileaks posted a link to Michael Best’s archived copy of the AKP Turkish emails that doxed a bunch of Turkish women. A number of people — principally Zeynep Tufekci — blamed Wikileaks, not Best, for making the emails available, and in so doing (and like the Macron dump) brought attention to precisely what she was rightly furious about — the exposure of people to privacy violations and worse. Best argues that had Tufekci spoken to him directly rather than writing a piece drawing attention to the problem, some of the harm might have been avoided.

But I also think the stink surrounding Wikileaks distracted focus from the story behind the curious provenance of that leak. Here’s how Motherboard described it.

First, Phineas Fisher, the hacker notorious for breaching surveillance companies Hacking Team and FinFisher, penetrated a network of the AKP, Turkey’s ruling party, according to their own statement. The hacker was sharing data with others in Rojava and Bakur, Turkey; there was apparently a bit of miscommunication, and someone sent a large file containing around half of akparti.org.tr’s emails to WikiLeaks.

WikiLeaks then published these emails on July 19, and as some pointed out, the emails didn’t actually seem to contain much public interest material.

Then Phineas Fisher dumped more files themselves. Thomas White, a UK-based activist also known as The Cthulhu, also dumped a mirror of the data, including the contentious databases of personal info. This is where Best, who uploaded a copy to the Internet Archive, comes in.

Best said he didn’t check the contents of the data beforehand in part because the files had already been released.

“I was archiving public information,” he said. “Given the volume, the source, the language barrier and the fact that it was being publicly circulated already, I basically took it on faith and archived a copy of it.”

Without laying out all the details here, I think there are some interesting issues about this hack-and-leak that might have gotten more scrutiny if the focus weren’t Wikileaks. But instead, the focus was entirely on what Wikileaks did (or actually, on blaming Wikileaks for what Best did), rather than how the hack-and-leak really happened.

I get that people have the need, emotionally, to attack Assange, and I have no problem with that. But when emotion disrupts any effort to understand what is really going on, it may make it more difficult to combat the larger problem (or, as lefties embrace coverage of the Bradley Foundation based on hacked documents and more mass hack-and-leak reporting gets journalism awards, to set norms for what might be legitimate and illegitimate hack-and-leaks).

If you hate Assange, your best approach may be to ignore him. But barring that, there really is a case for aspiring to factual accuracy even for Wikileaks.

Update: This article provides more detail on the hack and Macron’s attempts to counter the hackers.

So some of the added documents (which, incidentally, are the ones that show Cyrillic metadata) are from someplace unknown, not the five hacked email boxes. There are fake emails, described has “having been completed,” which may mean (this is a guess) the hackers sent emails that were sitting in draft; if so there might be fake emails that nevertheless come with authenticating DKIM codes. The description of what the campaign did — counter-attacks to phishing attempts — is still not clear as to whether it is metadata (faked emails) or content, but still seems most likely to be metadata.