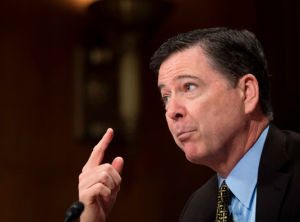 As you may have heard, President Trump has just fired FBI Director James Comey.

Trump previously ran on, indeed got elected on, and likely only on, the scurrilous rogue comments of Jim Comey starting with the rogue July 5, 2016 press conference where Comey went off all rails on DOJ and PIN protocols. Here is the New York Times original report:

Mr. Comey’s dismissal was a stunning development for a president that benefited from the F.B.I. investigation of the Democratic nominee during the 2016 campaign. Separately, the F.B.I. also is investigating whether members of the Trump campaign colluded with Russia to influence the election.

The abrupt firing raised questions over whether Mr. Trump was trying to influence the Russia investigation. But he said he was following recommendations from the Justice Department, which criticized how Mr. Comey concluded the investigation into Mrs. Clinton.

Trump actually saluted Comey for this at one point. What a micro-moment self serving, not to mention narcissistic jerk.

If anybody in the world thought that that Trump is not as craven and against the Constitutional form of government we all were born and raised on, let that no longer be a question.

And if the media cannot get their heads out of their asses and realize the danger is NOT just to their First Amendment rights, but to the core of our republic and democracy, then they too should go the way of the dodo bird.

The foundations of this cowardly play were always there if you followed the ever changing voice and words of Donald Trump regarding the Clinton email issue and how the Department of Justice handled it.

If you thought this point, and/or Comey was the one only voice that could not be fired or silenced, you are sadly mistaken.

This blog has never, and I am being kind across my writings, Marcy’s and those of our departed friend Mary, been a friend of Jim Comey. He has long, and more presently, been an uneven and self serving voice mostly interested in preservation and enhancement of his own voice and position. Comey has been preternaturally successful at this.

That said, tonight I will be in Comey’s camp. I await what my friends at Lawfare and some others may have to say regarding the Tuesday Night Massacre.

Because this is a day that should live bright for a very long time.

People glibly talk about the “Resistance”. How naive. The battle is now, and has been joined in full by a cabal that makes Nixon look like a piker. The place is here. The time is now.

The temporal fact that it is Comey that tipped a scale of justice is immaterial. It has happened.