Yah, These ARE The Droids We Have Been Looking For And Fearing 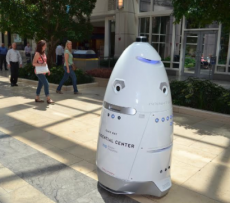 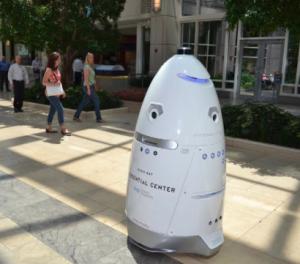 I did not always write about it so much here, but I got fairly deep into “Deflategate” analysis and law when it was going on. Because it was fascinating. I met so many lawyers, professors and others, it was bonkers. Have remained friends with many, if not most, of all of them. One is Alexandra J. Roberts, which is kind of funny because she was not necessarily one of the major players. Yet, she is one of the enduring benefits I have come to love from the bigger picture.

Today, Ms Roberts advises of some R2D2 like cop robots. I “might” have engaged in some frivolity in response. But, really, it is a pretty notable moment.

Police droids on the ground? Police drones in the air? You think Kyllo will protect you from a Supreme Court with Neil Gorsuch on it? Hell, you think Merrick Garland would not have done what he has done all of his life and sign off on ever greater law enforcement collection and oppression? Not a chance in hell. Neither Gorsuch, nor Garland, would ever have penned what Scalia did in Kyllo:

It would be foolish to contend that the degree of privacy secured to citizens by the Fourth Amendment has been entirely unaffected by the advance of technology. For example, as the cases discussed above make clear, the technology enabling human flight has exposed to public view (and hence, we have said, to official observation) uncovered portions of the house and its curtilage that once were private. See Ciraolo, supra, at 215. The question we confront today is what limits there are upon this power of technology to shrink the realm of guaranteed privacy.

So, with no further adieu, here, via the Bo Globe, is the deal:

There’s a new security officer in town. But this one runs on batteries, not Dunkin’ Donuts.

Next time you’re visiting the Prudential Center, don’t be alarmed if you bump into a large, rolling robot as it travels the corridors where shoppers pop in and out of stores.

No, it’s not an oversized Roomba on the loose. It’s the “Knightscope K5,” an egg-shaped autonomous machine equipped with real-time monitoring and detection technology that allows it to keep tabs on what’s happening nearby.

Marvelous! R2D2 is making us all safer!

Nope. Sorry. Safe streets, broken windows, and “cop on the beat” policing cannot be accomplished by a tin can.

Just Say No to this idiotic and lazy policing bullshit. The next thing you know, the tin can will be probable cause. And Neil Gorsuch will help further that craven “good faith” reliance opinion in a heartbeat.

Frankly, having been in the field for three decades, I think the thought that cops are proper “hate crime” victims is absurd. Honestly, all “hate crimes” laws are completely absurd as they create different and more, and less, valuable classes of human crime victims. This may sound lovely to you in the safety of your perch, where you want to lash out at the evil others.

But if the “all men are created equal” language in the Declaration of Independence is to be given the meaning that so many demagogues over American history assign to it, then the “hate crimes” segregation and preference of one set of human victims over others, is total unfathomable bullshit.

That is just as to humans. Let’s not even go to the “victim’s rights” of squeaky ass little R2D2 tin cans.