The WaPo is reporting that the FBI probe into ties between Russia and Trump’s campaign is looking at a person still in the White House, in addition to Mike Flynn and Paul Manafort.

The law enforcement investigation into possible coordination between Russia and the Trump campaign has identified a current White House official as a significant person of interest, showing that the probe is reaching into the highest levels of government, according to people familiar with the matter.

Further down in the article, WaPo names some people that might be this other person of interest — but just one of them is actually in the White House.

Still further down, the WaPo covers what first got me believing Jared Kushner is the ultimate target of this probe: his meeting with Sergey Gorkov, the FSB-trained head of the sanctioned Russian bank, Vnesheconombank.

The White House also has acknowledged that Kushner met with Kislyak, the Russian ambassador to the United States, in late November. Kushner also has acknowledged that he met with the head of a Russian development bank, Vnesheconombank, which has been under U.S. sanctions since July 2014. The president’s son-in-law initially omitted contacts with foreign leaders from a national security questionnaire, though his lawyer has said publicly he submitted the form prematurely and informed the FBI soon after that he would provide an update.

Vnesheconombank handles development for the state, and in early 2015, a man purporting to be one of its New York-based employees was arrested and accused of being an unregistered spy.

That man — Evgeny Buryakov — ultimately pleaded guilty and was eventually deported. He had been in contact with former Trump adviser Carter Page, though Page has said he shared only “basic immaterial information and publicly available research documents” with the Russian. Page was the subject of a secret warrant last year issued by the Foreign Intelligence Surveillance Court, based on suspicions he might have been acting as an agent of the Russian government, according to people familiar with the matter. Page has denied any wrongdoing, and accused the government of violating his civil rights.

As I’ve noted since, there was a lot of smoke coming from Kushner’s direction: first, SSCI’s explicit interest in interviewing Kusher and then two competing stories about a Trump request for CIA’s Sergey Kislyak dossier that only makes sense if the audience were Kushner, not Flynn.

But there are a few more dots (in addition to people claiming to have confirmed this point) that support the idea that Kushner is the ultimate target here, and that Trump, in his clumsy attempts to protect Mike Flynn by firing Jim Comey, is actually attempt to protect the father of his grandchildren. 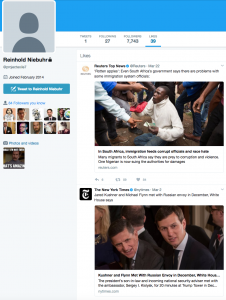 Michael T. Flynn, then Donald J. Trump’s incoming national security adviser, had a previously undisclosed meeting with the Russian ambassador in December to “establish a line of communication” between the new administration and the Russian government, the White House said on Thursday.

Jared Kushner, Mr. Trump’s son-in-law and now a senior adviser, also participated in the meeting at Trump Tower with Mr. Flynn and Sergey I. Kislyak, the Russian ambassador. But among Mr. Trump’s inner circle, it is Mr. Flynn who appears to have been the main interlocutor with the Russian envoy — the two were in contact during the campaign and the transition, Mr. Kislyak and current and former American officials have said.

The story was presented as White House confirmation of earlier New Yorker reporting that Kushner had the meeting, with the White House newly disclosing Flynn’s presence at it. But we now know that the representation that Kushner’s meeting with Kislyak was just one of a slew of meetings with foreign leaders wasn’t quite right. He had sent an aide to a subsequent meeting, and coming out of that meeting, he met with Gorkov, basically meeting with someone personally lobbying to get rid of Ukraine-related sanctions.

Later that month, though, Mr. Kislyak requested a second meeting, which Mr. Kushner asked a deputy to attend in his stead, officials said. At Mr. Kislyak’s request, Mr. Kushner later met with Sergey N. Gorkov, the chief of Vnesheconombank, which the United States placed on its sanctions list after President Vladimir V. Putin of Russia annexed Crimea and began meddling in Ukraine.

Of course, while we only learned that fact later, when Comey favorited that story on March 2, he would have known the full details of the follow-up communications. In other words, he would recognize that story as yet another case of the White House hiding Russian communications. He would also likely already know that Kushner had not included that meeting on his security clearance form.

We only learned that story on March 27, when the NYT revealed the Senate Intelligence Committee wanted to interview Kushner about the meeting. As I noted at the time, the discussion between Gorkov and Kushner, coming before Flynn’s December 29 discussions with Kislyak, would dramatically change the connotation of Flynn’s discussions of sanctions. Because, while the immediate context of the December 29 discussions would have been the new hacking related sanctions imposed on December 28, with the prior meeting with Gorkov, they would likely also include the Ukrainian ones. That was the payoff discussed in any quid pro quo related to the election: Putin would help elect Trump, and in exchange Trump would end economic sanctions.

Of course, to make the argument that Flynn was offering to give Russia the payoff for the election-related help, you’d have to get Flynn to cooperate. If you got Flynn to cooperate, he’d be able to tell the FBI whether or not those December 29 conversations pertained just to the hacking sanctions or also to the Ukrainian ones.

The FBI has a great many things they can and will use to get Flynn to cooperate, including his undisclosed foreign payments and his lies to the FBI in his January 24 interview.

[Large section based off erroneous reading of Wittes’ post removed.]

When Trump fired Comey, he claimed that Comey had thrice told him “he” wasn’t under investigation. Even assuming Comey did, consider how Trump would understand that and how normal people would. To us, “he” would include just Trump. But to someone like Trump whose only real loyalty is to family, “he” would include his family. Including Kushner.

Trump may well think Flynn is a nice man that deserves his loyalty. More likely, though, Trump knows that Flynn could sink his son-in-law. I believe that’s why Trump had to fire Comey in an effort to undercut the Flynn investigation.

And Rod Rosenstein, the survivor, just picked a partner from the firm of Kushner and Ivanka’s lawyer Jamie Gorelick, Robert Mueller, to take over the investigation into Flynn.

Update: Sure enough, Reuters is reporting that Mueller, by design, may not be able to investigate Kushner or Paul Manafort.

Within hours of Mueller’s appointment on Wednesday, the White House began reviewing the Code of Federal Regulations, which restricts newly hired government lawyers from investigating their prior law firm’s clients for one year after their hiring, the sources said.

An executive order signed by Trump in January extended that period to two years.

Mueller’s former law firm, WilmerHale, represents Trump’s son-in-law Jared Kushner, who met with a Russian bank executive in December, and the president’s former campaign manager Paul Manafort, who is a subject of a federal investigation.

Legal experts said the ethics rule can be waived by the Justice Department, which appointed Mueller. He did not represent Kushner or Manafort directly at his former law firm.

If the department did not grant a waiver, Mueller would be barred from investigating Kushner or Manafort, and this could greatly diminish the scope of the probe, experts said.

Does Vice President Pence Believe He Has Declassification Authority? Were Shitty SAIC Systems the Cause of the CIA’s China Disaster?