Man oh man did Vladimir Putin hand Trump his ass in their meeting the other day. While most the focus has been on Trump’s apparent refusal to confront Putin on the election hack (which Trump is now trying to spin — pity for him he excluded his credible aides who could tell us how it really went down or maybe that was precisely the point).

But I was more interested in Putin and Sergei Lavrov’s neat trick to get Trump to agree to a “joint working group on cybersecurity.”

Lavrov says Trump brought up accusations of Russian hacking; Moscow and DC will set up joint working group on cybersecurity.

Here’s how Trump has been talking about this in an [unthreaded] rant this morning. 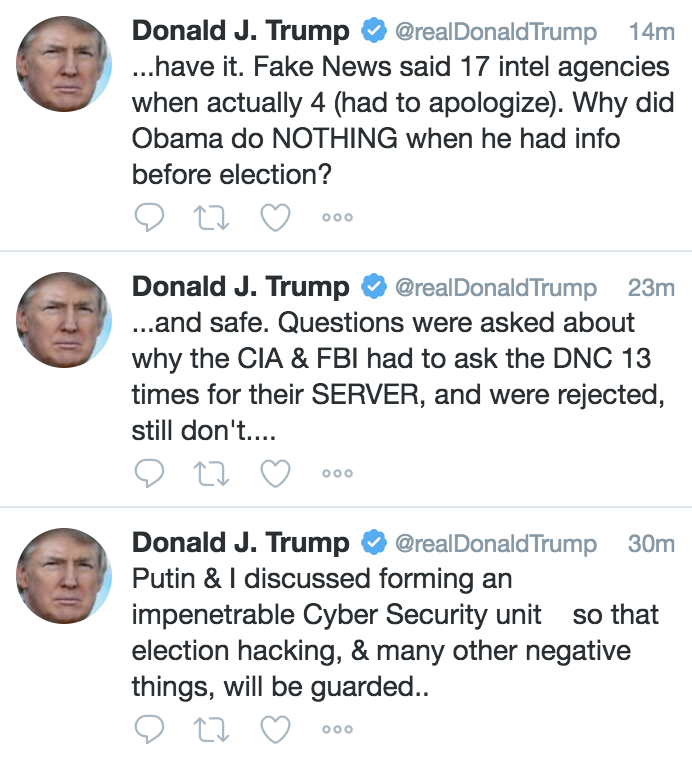 But I think even there they’re missing what a master stroke this was from Putin and Lavrov.

First, as I noted at the time, this comes at the moment Congress is trying to exclude Kaspersky Lab products from federal networks, accompanied by a more general witch hunt against the security firm. As I have said, I think the latter especially is problematic (and probably would have been designed at least partly to restore some asymmetry on US spying on the world, as Kaspersky is one of the few firms that will consistently ID US spying), even if there are reasons to want to keep Kaspersky out of sensitive networks. Kaspersky would be at the center of any joint cyber security effort, meaning Congress will have a harder time blackballing them.

Then there’s the fact that cooperation has been tried. Notably, the FBI has tried to share information with the part of FSB that does cyber investigations. Often, that ends up serving to tip off the FSB to which hackers the FBI is most interested in, leading to them being induced to spy for the FSB itself. More troubling, information sharing with US authorities is believed to partly explain treason charges against some FSB officers.

Finally, there’s the fact that the Russians asked for proof that they hacked our election.

SECRETARY TILLERSON: The Russians have asked for proof and evidence. I’ll leave that to the intelligence community to address the answer to that question. And again, I think the President, at this point, he pressed him and then felt like at this point let’s talk about how do we go forward. And I think that was the right place to spend our time, rather than spending a lot of time having a disagreement that everybody knows we have a disagreement.

If the US hadn’t been represented by idiots at this meeting, the obvious follow-up would be to point to Russia’s efforts to undermine US extradition of Russians against whom the US has offered proof, at least enough to get a grand jury to indict, most notably of the three Russians involved in the Yahoo hack, as well as Yevgeniy Nikulin. The US would be all too happy to offer proof in those cases, but Russia is resisting the process that will end up in that proof.

But instead, Trump and his oil-soaked sidekick instead agreed to make future hacking of the US easier.

Trump Was Worried HR McMaster or Fiona Hill Would Spy on His Conversation with... James Clapper Updated Rules on Congressional Notice the Day before He Retir...