As you’ve no doubt heard, the NYT reported out the details of the meeting between Don Jr, Jared Kushner, Paul Manafort, and Natalia Veselnitskaya. It not only makes clear that Veselnitskaya was introduced as an agent of the Russian government, but that Rob Goldstone, who set up the meeting, presented it as part of Russia’s efforts to help Trump. (And yes, for those asking in this thread, I do consider this the kind of evidence that rises to the level of collusion which was not present in the first round of this story.)

The documents “would incriminate Hillary and her dealings with Russia and would be very useful to your father,” read the email, written by a trusted intermediary, who added, “This is obviously very high level and sensitive information but is part of Russia and its government’s support for Mr. Trump.”

If the future president’s elder son was surprised or disturbed by the provenance of the promised material — or the notion that it was part of a continuing effort by the Russian government to aid his father’s campaign — he gave no indication.

He replied within minutes: “If it’s what you say I love it especially later in the summer.”

Four days later, after a flurry of emails, the intermediary wrote back, proposing a meeting in New York on Thursday with a “Russian government attorney.”

In an attempt to beat the NYT’s reporting (and because he is painfully stupid), Don Jr posted the emails in question. The email metadata makes it clear that the meeting involved Russia and Hillary — and included Jared and Manafort. (I’m stealing Matt Tait’s screencaps, which are here.) 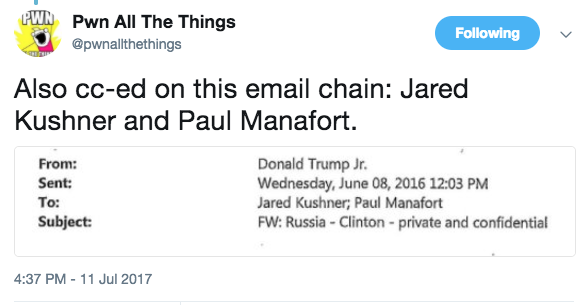 Matt Tait annotated the most damning line, making it clear this was an effort on the part of Russia — which Don Jr presumably already knew about — to help Trump.

This one line, once and for all, proves that the NSA under President Obama did not “tapp” Trump and his associates. That’s because in the the IC report on the Russia hack (and as recently as Admiral Mike Rogers’ most recent appearance before Congress), NSA only had moderate confidence in the conclusion that Putin affirmatively supported Trump.

Had the NSA collected this email, they would have had high confidence Putin was affirmatively helping Trump. (This is a point Tait also made not long after I made it.) But Rogers has said there was something about the source of the prior intelligence supporting this point that led NSA to adopt a more conservative stance than FBI and CIA.

So, yeah, the dumbass son not only incriminated himself, but he did away with one of the few talking points the GOP had left.

Be Careful How You Define Collusion: On the Veselnitskaya Bombshell and the... Yet More Proof Obama Didn’t “Tapp” Trump