The entire social media universe has been panicking over Fearless Leader’s whacked-out statement on North Korea at the end of his bigly speech yesterday on opioids. His hyperbole was on par with his decades of hawkishness about nuclear weapons, so both unsurprising while infuriating.

What I want to know: did he say what he did to distract from the Trump-Russia investigation underway, and/or did he say what he did roughly 30 minutes before the stock market closed for somebody’s benefit? I’d love to know who might have been short selling yesterday afternoon and this morning after his recent petulant tweet hyping the stock market’s record highs. Things don’t look good today, either, in spite of calming noises from Secretary of Exxon Tillerson. 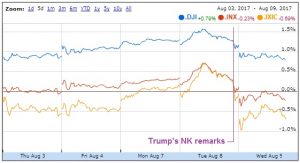 Whatever. Let’s look at some non-nuclear matters.

The New York Times’ op-ed, Our Broken Economy, trended yesterday morning on Twitter and is still making waves today. It’s a pretty good read with compelling charts, if not very deep. Morons across the internet have misinterpreted what it tells us, which is that income has stagnated or fallen for the majority of the U.S. while the income of the uppermost 1% to .01% has skyrocketed in less than a decade. Loss of leverage in wage negotiations due to union busting and the skyrocketing cost of secondary education have held back the lower 80%.

What has most recently ‘weaponized’ the growth of income, while destroying any illusion of the American dream? In my opinion, three things contributed the most:

— the loss of Glass-Steagall Act and the subsequent unmooring of the financial industry from risk-reducing practices which siloed capital;

— Citizens United, which exacerbated the trend toward regulatory capture;

— the financial crash of 2008 and the subsequent loss of wealth for the lower 80% in terms of savings, investments, and property ownership.

But a fourth, rapidly growing factor is making difference and may also be exploding as an unintended consequence of legislation passed in 2007 requiring a larger percentage of margin on commodities trading. Algorithmic trading, conducted out of sight, skimming from every trade, on stocks rather than on commodities and at inhuman speed and scale, has increased unearned wealth but only for the very wealthiest.

Matt Bruenig says we must confront capital. Yes, but I think the appeal to do so is based in fairness, a universal ethic. A system which distorts pricing by not allocating true and full costs of the commons consumed to products and services  sold is unfair. It is not a ‘free market’ and certainly not a fair when the playing field isn’t level and not every business pays for what it consumes of the commons.

And it’s not fair when businesses deliberately suppress wages below workers’ real cost of living. That’s slavery. We don’t need charts to tell us something is wrong when the prevailing wage won’t provide meager shelter and food.

The effect of Michigan’s criminal state government on Flint doesn’t remain in Flint. More than 70 new cases of Legionnaires disease have been reported in southeastern Michigan; this time the state’s health authorities have been prompt about reporting them, unlike the shoddy reporting around cases 2-3 years ago directly related to the water in Flint.

I will bet good money many of these new cases have a link to Flint since the water system has still not been completely replaced.

Eclectablog reminds us Flint’s Water Crisis is now at Day 678 and the city has yet to be made whole though Michigan’s Gov. Rick Snyder admitted he knew that Flint’s drinking water was poisoned with lead. There are still Flint residents who cannot drink their tap water without the use of a water filter.

Given the outbreak of Legionnaires disease, I wonder how many more Michiganders may actually sicken and die because of Rick Snyder’s handling of Flint’s financial emergency and the water system.

You might already have read about the lawsuit filed against Disney for its failure to protect children’s privacy; I know Marcy tweeted about it. More than 40 applications Disney developed and sold collect information without consent about the kids using them, putting them at risk, in violation of the Children’s Online Privacy Protection Act (COPPA).

But here’s what really bugs me about this on top of the privacy problems: Disney not only had a history with violating COPPA; the government went after them in 2011 and 2014 for problems with Playdom and MarvelKids. Disney must have known competitors Mattel and VTech had problems with their network-enabled electronic toys breaching children’s privacy circa November 2015. Why did Disney fail to remediate their 43 applications more than 18 months ago when both Mattel and VTech were under fire?

Disclosure: I own Disney stock. And yes, I’m thinking shareholders should be pissed off about this failure to disclose a material risk in financial reports BEFORE parents filed a lawsuit.

That’s it for now. See you tomorrow if we haven’t already been fried to a crisp. This is an open thread – treat each other nicely.