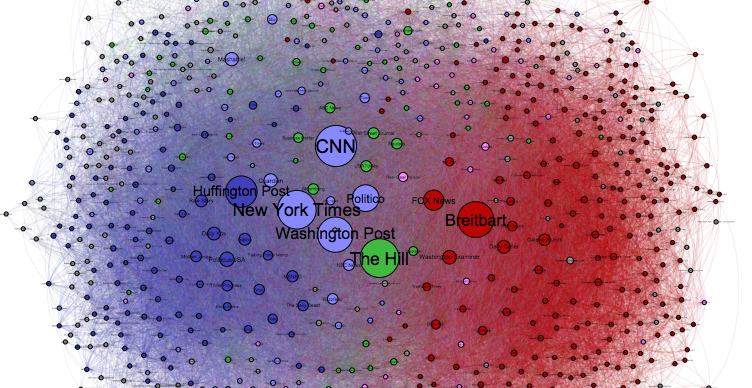 In just about every piece I wrote on “fake news” in the last year, I argued that the most influential piece of fake news of the campaign came not from the Russians, but instead from Fox News, in the form of Bret Baier’s early November “scoop” that Hillary Clinton would soon be indicted.

I was partly wrong about that claim. But substantially correct.

That’s the conclusion drawn by a report released by Harvard’s Berkman Klein Center last week. The report showed that the key dynamic behind Trump’s win came from the asymmetric polarization of our media sphere, embodied most dramatically in the way that Breitbart not only created a bubble for conservatives, but affected the overall agenda of the press, particularly with immigration (a conclusion that is all the more important given Steve Bannon’s return to Breitbart just as white supremacist protests gather in intensity).

So I was correct that the most important fake news was coming from right wing sites. I just pointed to Fox News, instead of the increasingly dominant Breitbart (notably, while Baier retracted his indictment claim, Breitbart didn’t stop magnifying it).

Here’s what the report had to say about the “fake news” that many liberals instead focused on.

Our data suggest that the “fake news” framing of what happened in the 2016 campaign, which received much post-election attention, is a distraction. Moreover, it appears to reinforce and buy into a major theme of the Trump campaign: that news cannot be trusted. The wave of attention to fake news is grounded in a real phenomenon, but at least in the 2016 election it seems to have played a relatively small role in the overall scheme of things. We do indeed find stories in our data set that come from sites, like Ending the Fed, intended as political clickbait to make a profit from Facebook, often with no real interest in the political outcome. But while individual stories may have succeeded in getting attention, these stories are usually of tertiary significance. In a scan of the 100 most shared stories in our Twitter and Facebook sets, the most widely shared fake news stories (in this sense of profit-driven Facebook clickbait) were ranked 66th and 55th by Twitter and Facebook shares, respectively, and on both Twitter and Facebook only two of the top 100 stories were from such sites. Out of two million stories, that may seem significant, but in the scheme of an election, it seems more likely to have yielded returns to its propagators than to have actually swayed opinions in significant measure. When we look at our data week by week, prominent fake news stories of this “Macedonian” type are rare and were almost never among the most significant 10 or 20 stories of the week, much less the election as a whole. Disinformation and propaganda from dedicated partisan sites on both sides of the political divide played a much greater role in the election. It was more rampant, though, on the right than on the left, as it took root in the dominant partisan media on the right, including Breitbart, Daily Caller, and Fox News. Moreover, the most successful examples of these political clickbait stories are enmeshed in a network of sites that have already created, circulated, and validated a set of narrative lines and tropes familiar within their network. The clickbait sites merely repackage and retransmit these already widely shared stories. We document this dynamic for one of the most successful such political clickbait stories, published by Ending the Fed, in the last chapter of this report, and we put it in the context of the much more important role played by Breitbart, Fox News, and the Daily Caller in reorienting the public conversation after the Democratic convention around the asserted improprieties associated with the Clinton Foundation.

Our observations suggest that fixing the American public sphere may be much harder than we would like. One feature of the more widely circulated explanations of our “post-truth” moment—fake news sites seeking Facebook advertising, Russia engaging in a propaganda war, or information overload leading confused voters to fail to distinguish facts from false or misleading reporting—is that these are clearly inconsistent with democratic values, and the need for interventions to respond to them is more or less indisputable. If profit-driven fake news is the problem, solutions like urging Facebook or Google to use technical mechanisms to identify fake news sites and silence them by denying them advertising revenue or downgrading the visibility of their sites seem, on their face, not to conflict with any democratic values. Similarly, if a foreign power is seeking to influence our democratic process by propagandistic means, then having the intelligence community determine how this is being done and stop it is normatively unproblematic. If readers are simply confused, then developing tools that will feed them fact-checking metrics while they select and read stories might help. These approaches may contribute to solving the disorientation in the public sphere, but our observations suggest that they will be working on the margins of the core challenge.

As the report notes, it would be easy if our news got poisoned chiefly by Russia or Macedonian teenagers, because that would be far easier to deal with than the fact that First Amendment protected free speech instead skewed our political debate so badly as to elect Trump. But addressing Russian propaganda or Facebook algorithms will still leave the underlying structure of a dangerously powerful and unhinged right wing noise machine intact.

Which makes “fake news,” like potential poll tampering even as state after state suppresses the vote of likely Democratic voters, another area where screaming about Russian influence distracts from the more proximate threat.

Or perhaps the focus on “fake news” is even worse. As the Berkman report notes, when rational observers spend inordinate time suggesting that fake news dominated the election when in fact sensational far right news did, it only normalizes the far right (and Trump) claims that the news is fake. Not to mention the way labeling further left, but totally legitimate, outlets as fake news normalized coverage even further to the right than the asymmetric environment already was.

Fake news is a problem — as is the increasing collapse in confidence in US ideology generally. But it’s not a bigger problem than Breitbart. And as Bannon returns to his natural lair, the left needs to turn its attention to the far harder, but far more important, challenge of Breitbart.

Trash Talk: The Trashiest Trash Until Next Trash Three Things: Eclipsed, Killer Robots, Back to the Salt Mines [UPDATED]