For some reason, many people who’re convinced the Trump Russia investigation will hit paydirt but who haven’t been particularly attentive believe the Steele dossier must all be true. This, in spite of the fact that some parts of it clearly are not true. The best example of that is report 086, labeled as July 25, 2015 (but which must actually date to July 2016), which quotes a former senior Russian intelligence official claiming FSB was having difficulty compromising western and G7 government targets. In the previous year, the Russians had been enjoying quite a lot of success against just those kinds of targets, including the Joint Chiefs of Staff (Russia’s APT 29 is also believed to have compromised the DNC in July 2015), making it surprising anyone following Russian matters even marginally closely could present that report as credible.

The Steele dossier is not a document that is either credible or not as a whole; it is a series of raw intelligence reports based off a series of sources, some of which conflict with each other, some of which may be credible, others of which are less so. Moreover, there are a number of details about the dossier as we received it or as we’ve since learned about its production that raise legitimate questions about its quality.

Two seemingly contradictory claims provide one example that is especially noteworthy given WaPo’s report that the Trump organization inked a branding deal in Russia in late 2015. The very first report released as the Steele dossier, dated June 20, claims that the FSB has, for years, been trying to cultivate Trump by offering him “lucrative real estate development deals in Russia” but “for reasons unknown, TRUMP had not taken up any of these.”

The sourcing on this claim definitely includes “a close associate of TRUMP who had organized and managed his recent trips to Moscow” (though how would they know FSB was dangling real estate to compromise Trump unless they were themselves tied to FSB?) and may include the trusted compatriot of a “senior Foreign Ministry figure.”

Compare that with the undated report (it probably dates to between July 19 and July 30, 2016) crediting “a separate source with direct knowledge” claiming that Trump’s “claimed minimal investment profile in Russia … had not been for want of trying.”

Which is it? Has Trump been pushing for real estate deals but failing, or have figures close to Putin been trying to entice him with such deals only to have him respond with remarkable coyness?

A September 14 report, reported second-hand from two people in Petersburg, goes so far as to claim Trump had even paid bribes to get business deals in the city, but offered little more. Significantly, the sources said Aras Agalarov — who was involved in the June 9, 2016 meeting offering dirt on Clinton in New York’s Trump Tower — would have any details on real estate deals and sex parties and the clean-up thereof. 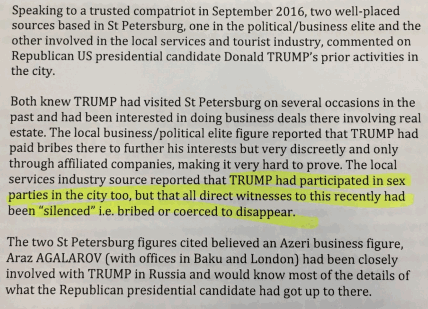 All of which is to say that in three different reports, Steele’s sources offered conflicting details about whether Trump was trying to get business in Russia but had failed, or Russia was trying to suck Trump into business deals as part of a program to compromise him, only to have him inexplicably resist.

Which brings us to the WaPo’s latest scoop, which reveals that between November 2015 and January 2016, the Trump organization signed a licensing deal for a big real estate project in Moscow, which ended up flopping because there was actually no deal behind it.

As part of the discussions, a Russian-born real estate developer urged Trump to come to Moscow to tout the proposal and suggested he could get President Vladimir Putin to say “great things” about Trump, according to several people who have been briefed on his correspondence.

The developer, Felix Sater, predicted in a November 2015 email that he and Trump Organization leaders would soon be celebrating — both one of the biggest residential projects in real estate history and Donald Trump’s election as president, according to two of the people with knowledge of the exchange.

Sater wrote to Trump Organization Executive Vice President Michael Cohen, “something to the effect of, ‘Can you believe two guys from Brooklyn are going to elect a president?’ ” said one person briefed on the email exchange. Sater emigrated to the United States from what was then the Soviet Union when he was 8 and grew up in Brooklyn.

Trump never went to Moscow as Sater proposed. And although investors and Trump’s company signed a letter of intent, they lacked the land and permits to proceed and the project was abandoned at the end of January 2016, just before the presidential primaries began, several people familiar with the proposal said.

Discussions about the Moscow project began in earnest in September 2015, according to people briefed on the deal. An unidentified investor planned to build the project and, under a licensing agreement, put Trump’s name on it. Cohen acted as a lead negotiator for the Trump Organization. It is unclear how involved or aware Trump was of the negotiations.

For six months, Christopher Steele pushed his sources for information on any deals Trump had planned in Russia. And only one of them — the one suggesting his go-between consult with Agalarov — offered any hint that a deal might have actually been done. Yet just months earlier, a deal had purportedly been signed, a deal personally involving Michael Cohen, who figures prominently throughout the dossier.

At least on their face, those are contradictory claims, ones that (because the WaPo story is backed by documents Congress will shortly vet) either emphasize how limited Steele’s collection was, even on one of his key targets like Cohen, or may even hint he was getting disinformation.

Or perhaps reading them in tandem can elucidate both?

First, some comments on the WaPo story.

It seems the real story here is as much the details as the fact that the deal was proposed. For example, I’m as interested that Felix Sater, from whom (as the story notes) Trump has been trying to distance himself publicly for years, was still brokering deals for the Trump organization as late as November 2015 as any other part of the story. See this post for some reasons why that’s so interesting.

It’s also quite significant that whoever leaked this to the WaPo did not explain who the investors were. Schedule another scoop in a week or so for when some outlet reveals that detail, because I suspect that’s as big a part of the story as the fact that the deal got signed. What entity came to Cohen months after Trump had kicked off his presidential campaign, and offered up the kind of branding deal that Trump loves (and which at least some of Steele’s sources say Trump had been seeking for over a decade), yet without the permits that would be a cinch if Putin and the FSB were really pushing the deal as part of a plan to compromise the candidate?

The sourcing, too, is of particular interest. WaPo describes its story as coming from, “several people familiar with the proposal and new records reviewed by Trump Organization lawyers;” in another place it describes its sources as, “several people who have been briefed on his correspondence.”  It explains that the emails are going to be turned over to Congress soon.

The new details from the emails, which are scheduled to be turned over to congressional investigators soon, also point to the likelihood of additional contacts between Russia-connected individuals and Trump associates during his presidential bid.

This all feels like an attempt, on the part of Trump lawyer Michael Cohen, to reveal to Trump via non-obstructive channels what he has found in a review of documents he’s about to turn over, with an emphasis on some of the most damning parts (Sater and the timing), but without yet revealing the public detail of the investors. By releasing it in this form, Cohen’s associates give Trump warning of what’s about to come, while blunting the damage the revelation will have in more fleshed out form.

Finally, the WaPo emphasizes Sater’s push for Trump to get Putin to say nice things. Particularly given the lack of permits here, that suggests Sater recognized the deal was not actually done, it needed powerful push from Putin. A push that, given the January collapse, apparently didn’t come in timely fashion. That may be the more interesting take-away here. The deal was, when Sater bragged about it to the guy who (according to Steele’s dossier) would shortly go on to clean up Paul Manafort’s earlier corrupt discussions with Russia, illusory. But it makes it clear that Cohen, if and when he had those discussions, was aware of the Trump organization’s earlier, failed effort to finally brand a building in Moscow. It would mean that if those dodgy meetings in Prague actually happened, they came against the backdrop of Putin deciding not offer the help needed to make the Trump deal happen in the months before the election started.

All that may suggest the Steele dossier may instead be rich disinformation on a key point, disinformation that hid how active such discussions really were.

In any case, the WaPo story is not definitive one way or another. It may be utterly damning, the kind of hard evidence Cohen is about to turn over that he is aware could really blow the investigation into Trump wide open, or it could be yet more proof that Trump continued to resist the allure of real estate deals in Russia, as some of Steele’s sources claimed. But it does raise some important questions that reflect back on the Steele dossier.

Update: NYT got the actual language of two of the Sater emails, which have now been delivered to HPSCI.

Michael I arranged for Ivanka to sit in Putins [sic] private chair at his desk and office in the Kremlin. I will get Putin on this program and we will get Donald elected. We both know no one else knows how to pull this off without stupidity or greed getting in the way. I know how to play it and we will get this done. Buddy our boy can become President of the USA and we can engineer it. I will get Putins [sic] team to buy in on this, I will manage this process.

Why does Sater tie the Trump Tower deal so closely with getting Trump elected?