Battle For The Wheel Trash Talk 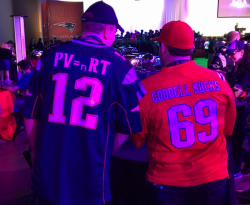 I swore I would not do Trash until the NFL started playing real games, but it turns out there is a very special game in this, the first week of college football. It is stunning that two dynasty college teams that usually open up with patsies like Lower Patagonia State or something are paired off in week one this year, and it should be a fascinating grudge match.

Yes, obviously, I am talking about Florida State and Alabama on the “neutral” site of the brand spanking new Mercedes Stadium in Atlanta. The Tide is number one rated in the early polls, with the Seminoles right behind at number 3. Huge implications for the end of season bowl playoff slotting. Both teams have second year QB’s that had sketchy years last year, Jalen Hurts for the Tide because of serious inconsistency, and Deondre Francis for the Noles because he was under constant assault from a very bad O-line. Both defenses are superb, so the one that gets their passing attack untracked the best is probably going to win.

Okay, that was a little cruel, as the real game of the week here at Emptywheel is the other blockbuster, Marcy’s Michigan Wolverweenies and Jim White’s beloved Chomping Gators, another neutral site game, this one at Jerryworld in Dallas. As you may recall, Florida absolutely got decimated by Michigan in the Citrus Bowl two years ago. Gators ranked number 17 and Michigan number 11 in the preseason polls. Both teams have holes all over the place, on both sides of the ball. The Weenies have the fewest returning starters of any team in major college football. The Gators have 29 players suspended for the game (okay, “only” ten the last time I checked). Neither team looks very proficient on offense, but Michigan might have a slight edge, so I guess I will take them in what is nearly a pickem. Oh, and the coaches Harbaugh and McElwain, seem to not get along very well, so keep an eye on that. Really, does Harbaugh get along with anybody?

Other good games include Ohio State at Indiana, Colorado State at Colorado, Troy at Boise State (seriously this should be a great game), West Virginia at Virginia Tech, and BYU at LSU for the start of Ed Orgeron’s tenure as head coach now that Les Miles is gone. That game was set for Houston, but has been relocated to New Orleans because of the Hurricane Harvey destruction. Teexas A&M Aggies at UCLA looks promising as well.

Also this weekend is the Italian Grand Prix from Monza. Am watching qualifying right now, and it has taken hours because of rain delays. It is really wet. Everybody is sliding on the famed Parabolica curve, it is pretty nuts. Not clear what the weather will be like for tomorrow’s race, but more rain a distinct possibility.

Lastly, Marcy ordered me to write an obituary for the departing odious Judge Richard Posner. No he is not dead, but he is retiring, presumably to spend more time with his self inflated ego. Posner boasts of his “legal pragmatism”, a load of crap that includes his own legal fact finding behind the appellate record. Good riddance to a narcissistic plague on the federal judiciary.

This week’s music comes from a local band that is starting to get some national attention, the Black Bottom Lighters. They are really good, give them a try. Rock on.

Did FBI Plan Russia’s Fire Sale in San Francisco for a Specific Reaso... Rinat Ahkmetshin: “Nothing Is Secret.”