Earlier today, legendary rat-fucker Roger Stone had a three hour interview before the House Intelligence Committee. Before the interview, he leaked his testimony, as all of the most implicated Trump officials — save Paul Manafort — have.

The testimony is telling for multiple reasons. Given the recent trouble I got in for saying “rat-fucker” on TV, I’m particularly invested in the way he avoided calling himself one.

As to the substance of the report, it is delightfully, tellingly, squirrelly in two different ways. First, his generalized denial is very specific to colluding with the Russian state to affect the outcome of the 2016 election; this is a point Renato Mariotti makes here.

I have no involvement in the alleged activities that are within the publicly stated scope of this Committee’s investigation  — collusion with the Russian state to affect the outcome of the 2016 election.

I’m even more interested in how he depicts what he claims are the three allegations made against him.

Members of this Committee have made three basic assertions against me which bust be rebutted her today. The charge that I knew in advance about, and predicted, the hacking of the Clinton campaign chairman John Podesta’s email, that I had advanced knowledge of the source or actual content of the WikiLeaks disclosures regarding Hillary Clinton or that, my now public exchange with a persona that our intelligence agencies claim, but cannot prove, is a Russian asset, is anything but innocuous and are entirely false.

In point of fact, this tripartite accusation is actually a misstatement of the allegations against him (though in his rebuttal of them, he is helped immensely by the sloppiness of public statements made by Democrats, especially those on the panel, which I’ve criticized myself). Generally, the accusation is more direct: that in conversing with both Julian Assange (though a cut-out) and Guccifer 2.0, Stone was facilitating or in some way helping the Trump campaign maximally exploit the Russian releases that were coming.

Which is why I find one other silence quite interesting: Stone makes no mention of the Peter Smith operation to find the emails, purportedly related to the Clinton Foundation, deleted from Hillary’s server. As I noted here, along with reaching out to multiple suspected Russian hackers and advising those with emails that might be Foundation emails to share them with WikiLeaks, rat-fucker Smith also pushed GOP operatives like rat-fucker Stone to reach out to Guccifer 2.0.

“The magnitude of what he was trying to do was kind of impressive,” Johnson said. “He had people running around Europe, had people talking to Guccifer.” (U.S. intelligence agencies have linked the materials provided by “Guccifer 2.0”—an alias that has taken credit for hacking the Democratic National Committee and communicated with Republicanoperatives, including Trump confidant Roger Stone—to Russian government hackers.)

As I noted, there is much about the events from August to October that suggest Republicans may have believed WikiLeaks had obtained, and might be leaking, the Clinton Foundation emails, only to have the John Podesta ones released in their stead.

If I’m right, it would mean that by pitching everything as pertaining to Podesta, and not to other emails, Stone can more successfully deny his involvement.

And Stone’s timeline obscures some of the key details here, notably leaving out his incorrect predictions not just of an October 5 release, but that they’d be the Foundation emails. 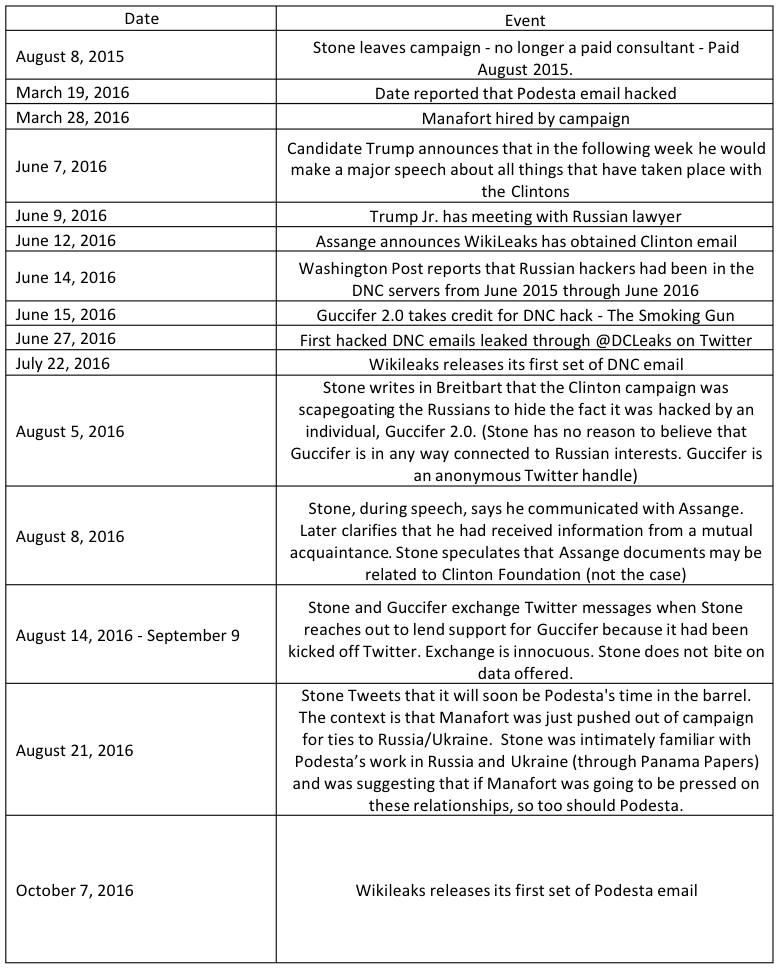 Also note: Stone describes his exchange with Guccifer as starting on August 14. That’s actually not right. It started on August 13 (actually, August 12 East Coast time), with this tweet, which puts it in the context of two offers for files. 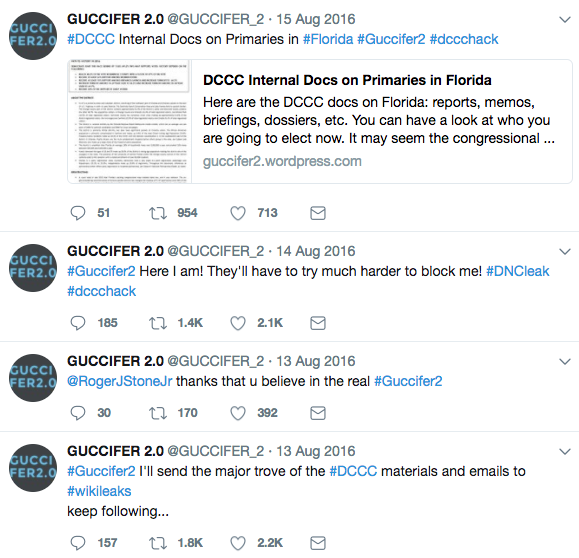 It’s definitely true (in the DMs that Stone includes) that Stone ultimately doesn’t response to Guccifer 2.0’s offers of data. 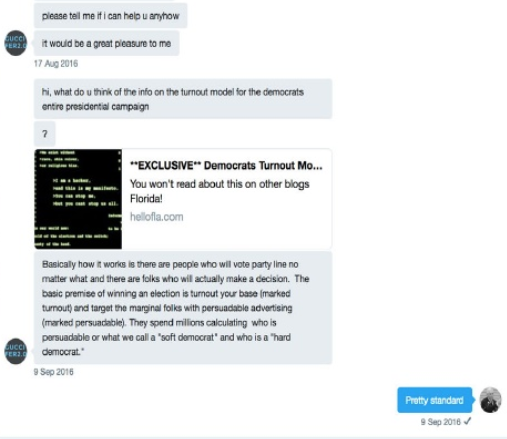 But that timeline also extends matters just to where things were heating up on Smith’s hunt for Clinton Foundation documents.

As noted above, Stone has denied colluding with the Russian state to affect the outcome of the election. But that’s not a denial of colluding with Russian hackers or Russian assets (the latter a rather curious term Stone uses twice to refer to Guccifer 2.0 in his statement, but not in the Breitbart piece in which he claims to have refuted claims he was an “asset”) to “prove Hillary’s corruption” or some such excuse for digging up more dirt on Hillary.

It’s Not the Economy, Stupid The Mark Zaid Materials from the Jeffrey Sterling Trial