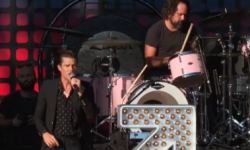 This will be a Trash Talk mostly absent the real world intrusions of the last few weeks. Mostly.

But I had dinner a couple of days ago with a couple of people, both students, with a family and home in Puerto Rico. No, nothing there is going the way Trump duplicitously portrays it. It is just not. To argue otherwise is to prove a fool and ignorant. Here is the Washington Post with a reminder of what we all knew. The family we know lives in a part of San Juan that is upscale. It is the “nice” part. They still do not have power. Just barely got running water. Things are very much not good there. And will not be for a very long time. For this White House to have taken the victory laps they did is simply unimaginable. Then there is the Las Vegas shooting. That will await another day.

So, probably we should be concerned about whether or not athletes in America stand of kneel for the national anthem. Even in hockey they may not always, or they may raise a Tommie Smith fist, and idiots will probably be up in arms about that.

On to the games. Turns out, the Mean Green of Sparty did the nation a favor by slaying Kaptain Khaki and the Bo Merlots in the large abode. And Mark Dantonio reminded everybody exactly who is the best college coach in Michigan. Don’t sleep on Chris Peterson and Washington, they are coming, and he is one hell of a coach. And hate it all you want, Penn State may be in that rarified picture too.

As to the pros: I cannot say it any better than Gary Myers did, so I won’t, and will let him speak:

The NFL needs to start looking for ways for the Chargers to move back to San Diego. Team owner Dean Spanos should take the $650 million relocation fee he owes the NFL and put it towards a new stadium in San Diego instead. Fans are tired of corporate welfare and don’t want to pay for billionaires to get new stadiums so they can make even more money. Los Angeles was fine without a team for over 20 years and now they have two. The Rams are having a tough time getting re-established in the market. The Chargers are not wanted. They can’t even sell out the 27,000-seat soccer stadium that is their home until the new stadium is ready in 2020. Fans of opposing teams are making it feel like home games are road games for the Chargers… Rivers has not relocated his family to the Los Angeles area. He customized an SUV with video equipment and a driver and rides up from San Diego every day with backup QB Kellen Clemens. Rivers says the commute takes about an hour each way. They must be leaving early and coming back late to beat the usually horrendous traffic. “It’s actually been even better than anticipated. That’s one thing I’m thankful for,” Rivers said. “I’ve had no issues at all and really feel like I’m getting all the work done. It’s been as if, honestly, as if I was right there in San Diego, as far as the way we get to setup. So, it’s been smooth.”
>>>>>
Chicago’s Mitchell Trubisky is the third rookie QB now starting as he takes over for free agent bust Mike Glennon. Browns second-round pick DeShone Kizer won the job out of camp and Texans first-round pick Deshaun Watson was made the starter at halftime of the first game. Alex Smith is doing a good job keeping first-round pick Patrick Mahomes on the bench in Kansas City… Watson, by the way, was electric in the Texans’ 57-14 victory over the Titans last week throwing for 283 yards and four TDs and also running for a TD. The Texans traded up from No. 25 in the first round and also gave up their first-round pick in 2018 to move to the Browns spot at No. 12 to get Watson. Of course, Cleveland should have taken Watson. In March, they took Brock Osweiler’s $16 million guaranteed off Houston’s payroll along with adding the Texans’ second-round pick. If the Texans win the Super Bowl, the Browns front office should get Super Bowl rings… The Browns are 2-29 in their last 31 games, the worst 31-game stretch in NFL history.

I saw that this morning, and all of it were thoughts I had to start with. It is time for Trubisky. And Watson for the Texans looks like the truth. With a real franchise QB, the Texans could be scary good for a very long time. As to the Bolts, they really should go back to San Diego. It makes far more sense than LA for them. Thing is, I am not sure San Diego wants them back at this point. The blinding arrogance and lack of sensitivity of the Spanos family and the NFL owners/Goodell is so incredible that I am not sure the Chargers are now welcome anywhere, much less in San Diego. What a total oligarch cockup.

The Pats overcame the Bucs in one of the better and more memorable Thursday Night games to move to 3-2 for the year. Huge win, but Brady is still spending too much time on his ass from poor offensive line play. And, though the defense has been praised for their effort against TB, it really was not that much better. History reflects that Bill Bel defenses start soft and gel when it counts, but this one is nowhere near that yet. We shall see, but, for now, Bill Bel and the boys are 3-2 and on to the Jets Jets Jets, who will undoubtedly enter the game next week also at 3-2 because they play the Brownies today. The better question is whether the Bills circle their wagons enough today against the Bengals in Cinci to keep the lead in the AFC East, or if they fall to 3-2, and leave the Pats right where they always are. In the division lead.

In other games, the Cards at Iggles is interesting. Philly has been in a breakout so far. The Cards have sucked. I think the Eagles win this pretty easy, but Cards are one of those outliers that, if they catch fire, can flat kill you. Don’t think so this week.

Detroit at Carolina ought to be pretty interesting. What kind of routes will Cam the misogynist man run? But I’ll put my dimes on the Kittehs, because they are a better team. Titans at the Fish was going to be great, but Mariotta is hurt, now maybe a tossup. Best game, probably by far, is the Cheesers at the Boys. I’ll call it a tossup. It is not a make or break game for either team. It is, however, one of the more underrated rivalries in the NFL over the last two decades. That is must see TV.

Today’s music is by The Killers. It seems a weird name for the band in light of what just happened a week ago in their home town of Las Vegas. But they have been rocking, and carrying the banner of Nevada and Las Vegas since they broke out with Hot Fuss in 2004. The band is ridiculously good, and have been from the start. If you do not know The Killers, you should, give them a try. So, let us rock on for another week.