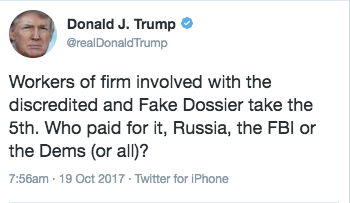 I can’t believe what I’m about to do.

I’m going to defend this tweet from Donald Trump as reasonable.

Before I do, let me say two things.

First, I have zero doubt that the Russians attempted to influence the election. I think it likely Robert Mueller will eventually show evidence that senior people in Trump’s camp attempted to and may have coordinated with people working for Russia, and people more tangential to the campaign sought out Russians for help. I think if the full story of the Russian involvement in the election comes out, it will be worse than what people currently imagine.

I also think Trump opponents have made a really grave error in investing so much in the Steele dossier. That’s true because, from the start, there were some real provenance questions about it, as leaked. Those questions have only grown, as I’ll explain below. The dossier was always way behind ongoing reporting on the hack-and-leak, meaning it is utterly useless for one of the most important parts of last year’s tampering. The dossier provides Trump officials a really easy way to rebut claims of involvement, even when (such as with Michael Cohen) there is ample other evidence to suggest inappropriate ties with Russia. Most importantly, the dossier is not needed for the most common reason people cling to it, to provide a framework to understand Trump’s compromise by Russia. By late January, WaPo’s reporting did a far better job of that, with the advantage that it generally proceeded from events with more public demonstrable proof. And (again, given the abundance of other evidence) there’s no reason to believe the Mueller investigation depends on it.

But because Trump opponents have clung to the damn dossier for months, like a baby’s blanket, hoping for a pee tape, it allows Trump, Republicans, and Russians to engage in lawfare and other means to discredit the dossier as if discrediting the dossier will make the pile of other incriminating evidence disappear.

I believe the Trump opponents’ investment in the Steele dossier will ultimately lead to a bad own goal.

All that said, I think Trump’s tweet today, while as typically douchey as all his tweets, is somewhat defensible (and the fact that it is defensible should serve as a warning to those still clinging to the Steele dossier).

Workers of firm … take the 5th

Trump is referring to the fact that two Fusion employees refused to testify before the House Intelligence Committee under a subpoena issued unilaterally by Devin Nunes. There is significant confusion, spread in part by their attorney, as to why they would not testify. Beforehand, their attorney said the First Amendment permitted them to blow off the committee (which wouldn’t even be true for a journalist, much less an oppo research firm pretending for convenience to be a journalistic enterprise). Since it happened, several credible journalists have said Fusion’s lawyer said they pled the Fifth (which would work, but would also mean they felt they had criminal exposure).

So the point it at least contested.

My guess is they’re just stalling, with the knowledge that if Nunes has to find a way to enforce his subpoena, the rest of the committee will get to weigh in and will refuse to back his effort.

It is true that anonymous sources say that the FBI has corroborated some things in the dossier (and Andy McCarthy makes an uncharacteristically worthwhile argument for what the tea leaves say). It is also true that Dianne Feinstein confirmed during the summer that we only have part (and given the numbering, probably a very small part) of the dossier. So we can’t be sure whether the bits FBI has corroborated are public at all.

There are things, as I’ve noted, that totally discredit parts of the dossier, such as the fact that it reported Russia hadn’t succeeded in hacking top targets almost a year after it was widely reported FSB already had (in general, the dossier is awful on the hack, as I lay out in this post; Steele’s speciality is in following the money and it shows).

Then there’s the fact that the unnecessary report on Alfa bank misspells their name: it’s a minor point but one those engaging in lawfare always point out.

The one thing that most people focus on — a Prague meeting between Cohen and the Russians — is not backed by the US passport he showed BuzzFeed.

A number of people have claimed that the dossier reported, 11 days after it occurred, the June 9 Trump Tower meeting. But as I lay out in this post, the dossier says the kompromat in question is older stuff based off wiretaps of Hillary, and it actually claims that Russia had not yet shared the intelligence in question, meaning the dossier did not confirm the June 9 meeting.

That doesn’t mean it’s discredited. But it doesn’t mean we know what parts of it have been corroborated, and some parts are not true (as we should expect from raw intelligence).

Who paid for it: Russia

The most problematic thing Trump said is that Russia may have paid for the dossier. It’s true we don’t know who paid for the dossier (indeed, that is the chief reason why Fusion doesn’t want to testify, to hide who did pay for it). Rumors say that a Jeb Bush supporter paid for it up until June 2016 (meaning, for a bunch of reports that aren’t public at all), and a Hillary supporter paid for it until November. Steele has claimed in court filings that the reports that came after that, including the December 13 report that has the most incendiary claims (including that Trump paid hackers involved in the operation), that he worked for free after November and that his sources — who normally would be paid — also just dumped the intelligence that happened to be the most inflammatory parts into his lap.

The Defendants continued to receive unsolicited intelligence on the matters covered by the pre-election memoranda after the US Presidential election and the conclusion of the assignment for Fusion.

After receiving some such intelligence [Steele] prepared the confidential December memorandum, … on his own initiative on or around 13 December 2016.

That last claim — that Steele worked for free — is pretty sketchy, especially when you consider that (given the numbering in the dossier and Feinstein’s confirmation we’ve got just part of the dossier) there were likely 31 reports filed between October 19 and December 13.

Regardless of who really paid for the work, the fact that Steele claims he (and his sources) were working for free, the fact that the Russians would have known about the dossier at least by October 31, when David Corn wrote about it, and possibly by mid-September, when Steele started briefing journalists on it, the fact that Aleksej Gubarev quickly sued, the fact that a suspected dossier source died in mysterious circumstances in December, and the fact that the last report tied everything up in a neat little bow, suggests the Russians may have been feeding Steele disinformation by that last report.

Then there’s another detail that makes the Russian accusation at least reasonable: the fact that Rinat Ahkmetshin had a relationship with Fusion (to work on anti-Magnitsky stuff) at precisely the same time as Fusion was working on the Trump dossier. Not only does that fact make it more likely Russians eventually learned of the dossier and fed Steele disinformation, but it also means Fusion was getting paid by Russians at the same time as or not long before it was producing free Steele dossier work.

Who paid for it: FBI

People seem most offended by Trump’s claim that FBI may have paid for the dossier. The reporting on this point conflicts, but note that CNN has said that Steele got paid by the FBI for expenses.

The FBI reimbursed some expenses of the former British intelligence operative who produced a dossier containing allegations of President Donald Trump’s ties to Russia, people familiar with the matter said.

The former British spy who authored a controversial dossier on behalf of Donald Trump’s political opponents alleging ties between Trump and Russia reached an agreement with the FBI a few weeks before the election for the bureau to pay him to continue his work, according to several people familiar with the arrangement.

The agreement to compensate former MI6 agent Christopher Steele came as U.S. intelligence agencies reached a consensus that the Russians had interfered in the presidential election by orchestrating hacks of Democratic Party email accounts.

Ultimately, the FBI did not pay Steele. Communications between the bureau and the former spy were interrupted as Steele’s now-famous dossier became the subject of news stories, congressional inquiries and presidential denials, according to the people familiar with the arrangement, who spoke on the condition of anonymity because they were not authorized to discuss the matter.

The FBI reached a deal in October to pay a former British spy who had compiled a dossier on Donald Trump’s alleged ties with Russia, an indication of how seriously the bureau was taking the allegations, according to a person familiar with the matter.

The deal for the former operative, Christopher Steele, to continue his work on behalf of the FBI fell apart when Steele pulled out, said the source, who has direct knowledge of the situation.

Given what Chuck Grassley has asked and said in response, my suspicion is the reality is that FBI paid Steele’s expenses for trips to explain sourcing and other details of the dossier to them, meaning their funds didn’t pay his sources or for his time, but did pay for him to meet with the FBI.

Who paid for it: Dems

This claim is a no-brainer. According to the public story, a Hillary supporter — who has always been presumed to be a Democrat though there’s no reason that has to be true (indeed, it is utterly conceivable that the same person paid for the work first in Jeb’s name and then in Hillary’s) — paid for all the reports we have, save the December 13 one.

Finally, people are especially offended that Trump, with his “or all,” insinuated that the FBI and Russians were colluding against Trump.

It’s certainly possible that’s what he intended. But the public record at least claims that three different entities paid for the dossier over time; that same record makes a reasonable claim that both the Dems and FBI paid some money to support the dossier.

All of which is to say the serial payment for the dossier does not require that “or all” to be a malicious insinuation of collusion (heh) between FBI and Russia.

I know this will be an unbelievably unpopular post. But the dossier simply isn’t as pristine as those clinging to it want it to be. Which is a good reason for Trump opponents to spend more time highlighting the great reporting of the WaPo or NYT, which often as not has been confirmed and is backed by public information.

Update: Made some tweaks in my argument that Trump opponents should stop clinging to the Steele dossier.

Christopher Wray and the Myth Created by Parallel Construction Technical Fixes in HJC Bill Suggest SCOTUS May Have Reviewed a (2015 ?) FISA...