As the Wall Street Journal reported this morning, in December 2016, Mike Flynn had a second meeting with representatives of Turkey to discuss a plan to help them kidnap Fethullah Gulen.

Federal Bureau of Investigation agents have asked at least four individuals about a meeting in mid-December at the ‘21’ Club in New York City, where Mr. Flynn and representatives of the Turkish government discussed removing Mr. Gulen, according to people with knowledge of the FBI’s inquiries. The discussions allegedly involved the possibility of transporting Mr. Gulen on a private jet to the Turkish prison island of Imrali, according to one of the people who has spoken to the FBI.

The report has led to some gleeful hand-wringing (and, as always, baby cannon eruptions) from interesting quarters. 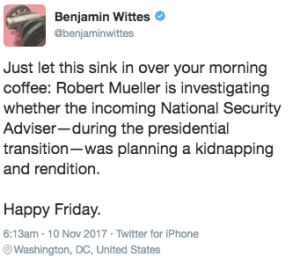 For those of us who have opposed the US practice of extraordinary rendition, sure, the notion that Flynn would work with a foreign country to assist in the illegal kidnapping of someone that country considered a terrorist does seem outrageous. But for those who, not so long ago, worried that counterterrorism success might lead us to eschew things like extraordinary rendition, I’m not sure I understand the hand-wringing.

Yet the more effectively we conduct counterterrorism, the more plausible disbelief becomes and the more uncomfortable we grow with policies like noncriminal detention, aggressive interrogation, and extraordinary rendition. The more we convince ourselves that the Devil doesn’t really exist, the less willing we are to use those tools, and we begin reining them in or eschewing them entirely. And we let the Devil walk out of the room.

Especially not when you consider Mike Flynn’s service to the country. For fourteen years, Flynn played a key role in counterterrorism policy, serving in an intelligence role in Afghanistan when we were paying Pakistan bounties just to have enough Arabs to fill Gitmo, serving as Director of Intelligence for JSOC for some of the bloodiest years of the Iraq War, then serving in another intelligence role in Afghanistan during a period when the US was handing prisoners off to Afghanistan to be tortured.

That’s what two presidents, one a Nobel Prize winner, and another increasingly rehabilitated, asked Mike Flynn to do. And in that role, I have no doubt, he was privy to — if not directly in the chain of command — a whole lot of legally dubious kidnapping, including from countries with respectable institutions of law. (In related news, see this report on MI6 and CIA cooperation with Gaddafi, including kidnapping, after 9/11.)

So having spent 14 years kidnapping for the United States, why is it so odd that Flynn would consider it acceptable to help one of our allies in turn, to help them kidnap the kinds of clerics we ourselves have targeted as terrorists.

There is, of course, something different here: the suggestion that Flynn and his son might profit mightily off the arrangement, to the tune of $15 million.

Under the alleged proposal, Mr. Flynn and his son, Michael Flynn Jr., were to be paid as much as $15 million for delivering Fethullah Gulen to the Turkish government, according to people with knowledge of discussions Mr. Flynn had with Turkish representatives. President Recep Tayyip Erdogan, who has pressed the U.S. to extradite him, views the cleric as a political enemy.

But even the notion of bribery to facilitate human rights abuses is not something the US forgoes. One of the biggest disclosures from the SSCI Torture Report, for example, is how the Bush Administration worked to bribe other countries to let us build torture facilities in their countries.

The buddies of those now scolding such arrangements were part of that bribery operation.

The big question with Flynn is whether the similar bribe for this kidnapping operation would have been different from those under the table bribes we paid for our torture facilities. Did they go into the countries’ populace, or did they get pocketed by the national security officials doing the dirty deeds?

I actually don’t mean it to be a gotcha — though I would sure appreciate a little less hypocritical squeamishness from those who elsewhere view such irregular operations as the cost of keeping the country safe (as Erdogan claims to believe to be the case here).

Rather, I raise it to suggest that Mike Flynn knows where the bodies are buried every bit as much as David Petraeus did, when he was facing a criminal prosecution to which the best response was graymail. Flynn surely could demand records of any number of kidnapping operations the United States carried out, and he might well be able to point to bribes paid to make them happen, if Robert Mueller were to charge him for this stuff. It’s different, absolutely, that it happened on US soil. It may (or may not be) different that an individual decided to enrich himself for this stuff.

But this is the kind of thing — Mike Flynn knows well — that the US does do, and that certain hawks have in the past believed to be acceptable.

The Flynn-Turkey Deal Raises the Obstruction Stakes for the Preet Bharara F... The Slow Death of Neoliberalism: Part 4C Conclusion
Scroll to top