The Ridiculous — and Chilling — IP3 Plan for Saudi Economic Diversification

Last week, I pointed out that the retired military generals of IP3, one of the companies that Michael Flynn dabbled with while looking into Saudi Arabia’s plan to develop nuclear power, viewed the US strategy in the Middle East as one of “resourcing conflict“.  I then looked a bit further into the security aspect of IP3’s proposals. But as we see in slide 9 of the IP3 PowerPoint presentation for the Saudi king from August of 2016, IP3 derives its name from “Peace” (the security plan), “Power” (the nuclear power plant construction) and “Prosperity”: 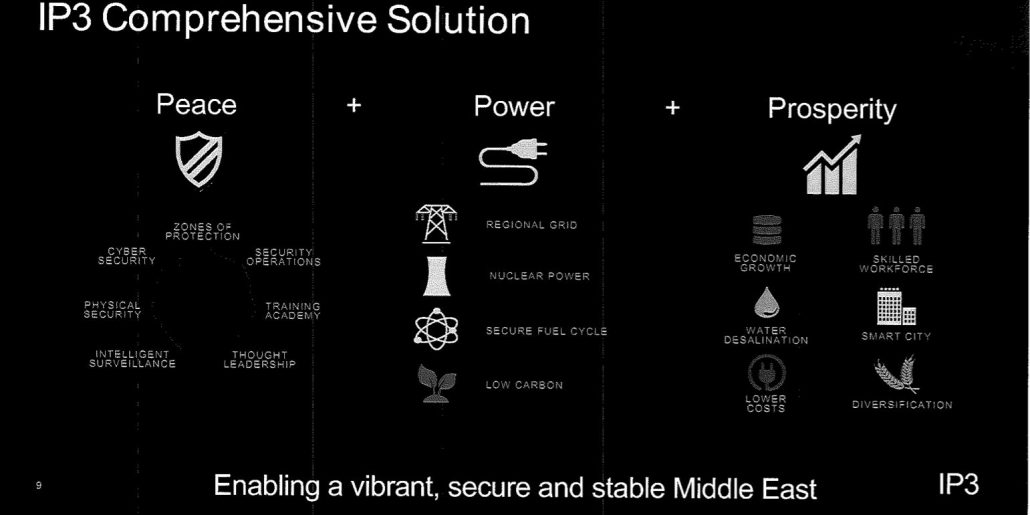 It seems that IP3 views “Prosperity” as encompassing diversification of the Saudi economy, and that somehow it will come about from the lower costs involved in nuclear power, a newly skilled workforce, water desalination and a “smart city”. But, if we also look at the IP3 article at Medium that I found earlier, we see more information on this economic plan. In fact, part of it is found in the same sentence as the “resourcing conflict” phrase:

We need a strategy that doesn’t rely solely on resourcing conflict with weapons sales, arms agreements, or new deployments of U.S. military forces, but one of empowerment through the intellectual capital and industrial might of our nation’s private sector.

Let that soak in for a second: we are talking here in the context of diversifying the Saudi economy, and IP3 is saying that the Saudis will be “empowered”, but that will come about “through the intellectual capital and industrial might of our nation’s private sector”. It’s the business brainpower and the actual businesses themselves from the US that are to drive building a vibrant Saudi economy that relies on more than just oil. From another part of the article:

The people of the Middle East and North Africa need clean, reliable electricity. They need water. They need more career opportunities, and jobs that do not rely on fossil fuel exports alone. They have bold ambitions for a more prosperous future and more inclusive societies.

Note also that this pitch from IP3 is meant to provide the US as an alternative to growing Russian influence in the Middle East. The PowerPoint presentation suggests working with China, although the Medium article proposes a US-only plan. [Side note: I’m currently very deep in the rabbit hole of the various corporate groups and their changing alliances through the past few years, along with the various power plant agreements that countries in the area have executed to date. It’s very complex and has changed very many times. If I find anything useful in the analysis, especially how Flynn fits into the various groups, it will be another post in this series.] In that context, IP3 laments that the US is at a disadvantage, because the competing operations from Russia and China are state-supported:

As a recent report from the Carnegie Endowment for International Peace notes, both countries “receive significant state support for their ambitious technology export plans,” …

It really seems that what IP3 wants is a situation in which the the company gets all the benefits of “free enterprise” but also enjoys the sizable advantage of being the “chosen one” to get the imprimatur of the US government so that competing groups are excluded. That would explain why Flynn faces so much more potential legal trouble if the reports of him continuing to push one or more of the competing proposals once he became National Security Advisor turn out to be true, especially if he still stood to profit from the work.

But why nuclear in the first place? Of course, peak oil is coming, and so the Saudis know they have to wean themselves from their dependence on oil for domestic energy consumption. The World Nuclear Association gives some hard numbers for Saudi needs and the evolution of their plans for diversification:

Saudi Arabia’s population has grown from 4 million in 1960 to over 31 million in 2016. It is the main electricity producer and consumer in the Gulf States, with 338 TWh gross production in 2015, 150 TWh from oil and 189 TWh from gas. It consumes over one-quarter of its oil production, and while energy demand is projected to increase substantially, oil production is not, and by 2030 a large proportion will be consumed domestically, much of it for electricity generation. Its per capita consumption is about 9000 kWh/yr, heavily subsidised.

I was pretty surprised by this. I viewed Saudi oil production as being much larger than domestic consumption, so the fact that they already consume a quarter of their production and their domestic generation capacity will need to expand up to four fold in only 15 years puts them on the brink of catastrophe. Their planning to diversify has started, but changed recently:

That earlier plan looked pretty reasonable, with most of the increases in power generation coming from a mix of renewable sources. But that all changed in 2016, with renewables getting cut substantially, from a 50% target down to only 10% and the share of generation accounted for by natural gas actually increasing from 50% to 70%. So what happened to cause this switch away from renewables and back to natural gas (even while some of the discussions on nuclear are continuing)? [Note that a 1.2 GWe solar power plant is opening soon elsewhere in the Middle East, so the Saudis are falling behind on solar.] For one thing, the price of natural gas dropped by about 60% from early 2014 to the beginning of 2016. That timeframe also coincides with the rising influence of Mohammed bin Salman, as his father became king in 2015 and MBS was named Crown Prince this summer.

As Vox explained to us recently, MBS’s “purge” was all about Saudi life after oil. But like his best buddies in the Trump Administration, he can’t really seem to get anything right. Note that gas prices have now re-stabilized at only about 25% lower than they were during most of 2013 to 2015. Also, remember the “smart city” in the IP3 presentation? Bruce Riedel described that and other bits of MBS’s “reforms” to the New Yorker:

“The Saudi Vision 2030 is increasingly turning out to be a failure in economic terms. It has more and more the characteristics of a Ponzi scheme. This new city, Neom, in the Gulf of Aqaba that is supposed to attract five hundred billion dollars of investment and where normal rules of Saudi society aren’t going to apply—meaning women can do things—will have more robots than people. This isn’t serious. This is the kind of thing used to divert people from the real issues,” Riedel said.

The Crown Prince’s regional strategy has also either stalled or backfired, too. “His signature policy is the Yemen war, which has come home to haunt Riyadh,” Riedel, now at the Brookings Institution, said. “Its Qatar blockade is a failure. It wants Qatar to be like Bahrain, just an appendage. And Qatar hasn’t given in.”

That’s pretty much how it seems to me, too. I really don’t buy any of the lip service that the changes MBS is bringing about are aimed at bringing more liberal thought into the kingdom or improving the lives of the general population. I see a huge power grab at a level that makes Trump and MBS buddy Kusher jealous. A purge that results in torture of those detained looks much more like consolidation of power than a move toward a more open society.

And that’s why the collection of technology aimed at “security” of the proposed nuclear sites makes me think it’s all about keeping the population in line as more and more rivals are eliminated. I also think that’s why various US companies have been jostling to be in line when contracts start getting handed out.

As a postscript, I would also note this Intercept article on Erik Prince and the push for privatized intelligence sources. Recall I felt like he had a hidden hand in the Iron Bridge model of security ostensibly around the power plants, as well. Somehow, all these plans with private companies and governments working together in new areas starts to get pretty creepy.

Via What Surveillance Intercepts Is the Government Chasing Manafort’s... Three Things: Mit Handelsblatther