Why Did Trump Tweet an “In the Ball Park” Accurate Number for Hillary’s Total Staffers on June 9, 2016?

In this post, I showed how the George Papadopoulos filings suggest there was a signaling process that went on during 2016, as he and other staffers sent public signals to the Russians that may have suggested further commitment to a deal of some kind. In this post, I laid out a bunch of circumstantial evidence suggesting that the current, public story about the June 9, 2016 meeting is just a limited hangout, one that hides more damning details about what happened after Natalia Veselnitskaya and Rinat Akhmetshin left the meeting. I also examined the first Guccifer 2.0 documents and noted that, in addition to responding to and debunking the June 14 WaPo story, they might serve well to lay out (arguably, to oversell) the breadth of what the Russians had stolen.

With those details in mind, I want to return to a detail many others have already noted, Donald Trump’s tweet, just 40 minutes after the Trump Tower meeting started, referencing Hillary emails (albeit the ones she deleted off her server, not the still secret stolen ones). 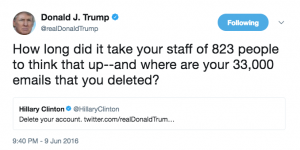 Mind you, as Pseudonymous in NC noted, the tweet was done on an iPhone — this is the period from before Trump had switched to iPhones — meaning someone else, perhaps either Brad Parscale or Dan Scavino, tweeted it. PINC lays out reasons either one of Trump’s data guys might be of particular interest:

Per the Bloomberg pre-election “bunker” story, Parscale was one of the few with credentials to the boss’s account. Pre-written tweets during events like the debates went through the web client, but my guess is that Scavino and Parscale represent most of the ‘Twitter for iPhone’ tweets in 2016 and early 2017. Some of them are RTing Scavino’s personal account, and Caddy Dan is that kinda guy. Parscale has consistently used an iPhone, including the June 8th photo from the Tower.

Remember that Feinstein is interested in Scavino’s contacts with, er, VKontakte, and that’s before considering Parscale’s data op. Pretty much everything tweeted out during 2016 that relates to the specifics of hacked emails is sent from an iPhone.

And the intermediary for the VK connection was Goldstone, going back to January 2016. It’s interesting that neither Scavino nor Parscale have apparently been called in for chats with investigators, or if they have, we haven’t heard about it.

What I’m thinking is that if there was indeed an after-meeting about “dirt in the form of emails”, Scavino or Parscale may have been brought into the room. And Goldstone had been put in touch with Scavino earlier that year.

This story revealing Goldstone’s communications about his role in brokering the VK contact doesn’t support the possibility that one of the data guys was brought into the room. Rather, Goldstone’s emails suggest he discussed the idea with Don Jr and Paul Manafort, presumably on June 9, but that Scavino was not included in the meeting, even though he had been looped in during earlier discussions about it.

The newly disclosed emails show that Goldstone was in contact with the campaign about two weeks after visiting Trump Tower.

“I’m following up on an email [from] a while back of something I had mentioned to Don and Paul Manafort during a meeting recently,” Goldstone wrote to Scavino on June 29. Goldstone wrote that his client, Emin Agalarov, and a “contact” at VK wanted to create a “Vote Trump 2016” promotion.

“At the time, Paul had said he would welcome it, and so I had the VK folks mock up a basic sample page, which I am resending for your approval now,” Goldstone wrote. “It would merely require Mr. Trump to drop in a short message to Russian-American voters or a generic message, depending on your choice, and the page can be up and running very quickly.”

In any case, the discussion about VK is yet another detail that makes it pretty likely Goldstone, at least, arrived early or stayed after Natalia Veselnitskaya and Rinat Akhmetshin left (in the WaPo story on this, Scott Balber denies VK came up at any meeting Ike Kaveladze attended).

One other possibility for who sent that Tweet, though: It would not be surprising if Don Jr had access to Pop’s account. At least recently, he has alternated between an iPhone and the web client to send his own tweets, so it’s possible any tweets he sent on Dad’s behalf would also be from an iPhone.

But I’m at least as interested in why Trump (or rather, Scavino or Parscale or Don Jr) used the number “823” in the tweet. In the aftermath of the John Sipher interview Jeremy Scahill did, Sipher suggested to me might be some kind of signal, a code; he’s the pro–maybe he’s right.

Politico’s analysis of the Hillary campaign’s May 20 FEC filing showed Hillary had 732 staffers at the time of the report. The day after the June 9 meeting, Philip Bump did a story comparing Hillary and Trump’s staffing (a slew of such stories in the weeks after the June 9 meeting was one reason Corey Lewandowski got replaced as campaign manager), referencing the tweet. But his analysis reflected the month’s long lag in FEC filings. Without doing cleanup (to figure out who got paid that frequently, whether anyone got paid monthly rather than bi-monthly), Clinton’s FEC filings seem to show 587 individual payroll disbursements at her headquarters on June 15, 2016.

I talked to a couple of people on the campaign who remember thinking about the tweet, and its use of the 823 number, in real time. Someone who was working on responding to such issues told me he thought, when the tweet came out, that it might have been just a guess (though now thinks it might come from misreading a report). But another Hillary staffer described taking note of the specific number in real time. That person did about 10 minutes of follow-up at the time, checking real-time FEC filings, and concluded that it might be an accurate number. Between headquarters staff, working (policy) teams, advance, and field staff, the person believes the 823 number could very well represent a close to real number of staffers Hillary had “working” on her campaign.

Of course, none of this would mean the number came from the Russians. Such estimates are done by (competent) political campaigns all the time. So it could have come from Trump’s data people — the same people who could have tweeted the tweet in Trump’s name — itself.

That said, in none of the other Trump tweets using the 30,000 or the 33,000 email number does he include a similarly specific detail — the closest comparison is one invocation of Chelsea’s wedding. Note, too, just one other of those tweets also came from an iPhone — the equally suspicious one on July 27, 2016 asking Russia to release those emails (though one of the others came from the web client).

One more point on the number: That night, at 8:22PM ET, someone on Reddit’s The_Donald thread posted, “Hillary has a staggering 823 staffers on her campaign; Donald Trump  has over 142,000.” Best as I understand it, the comment was almost immediately removed by moderators. I find that worth noting.