Defense Department Rules Data on Failure in Afghanistan Is Not Releasable

Today, the Special Inspector General for Afghanistan Reconstruction released the 38th quarterly report on the “reconstruction” effort in Afghanistan. We need only read as far as Inspector General Sopko’s cover letter to learn that the Department of Defense has decided that the effort in Afghanistan is failing so badly that a complete lid must be placed on information that provides details that can be used to document that failure: 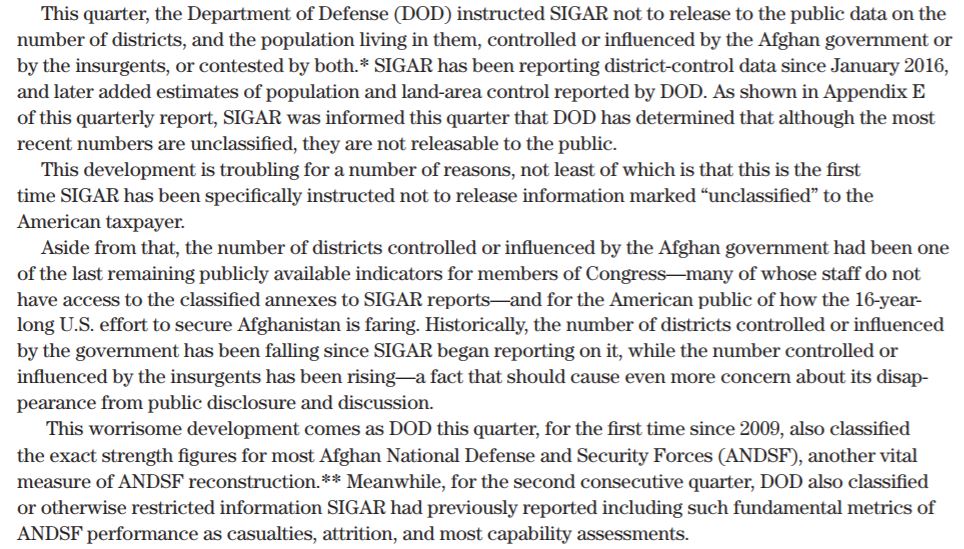 DOD continues to blaze new ground in its efforts to hide its failures. Remember when it tried retroactive classification to hide a report it didn’t like? This is an interesting variation on that play. Now, data that is clearly known to be unclassified, and that SIGAR has been publishing for two years, is suddenly “not releasable”.

Why is it not releasable? That, of course, is because it shows just how badly DOD is failing in Afghanistan. Note that SIGAR tells us “the number of districts controlled or influenced by the government has been falling since SIGAR began reporting on it”. You can bet everything you own that had there been even the slightest improvement on territory held by Afghan forces, DOD would have told SIGAR to release the data and would have had generals on every network touting their resounding success. At the same time, DOD is replaying a previous trick in classifying the actual force size for Afghan forces. I interpret that move to be telling us that Afghan forces are dwindling faster than previously claimed, presumably through the also-classified rates of casualty, attrition and capability metrics.

The ruling prohibiting release of data on the territory held becomes even closer to an attempt at retroactive classification as we move to the next part of Sopko’s cover letter:

Just because they don’t want us looking closely at the data from November, here it is:

Granted, this report is from December 15, but let’s take a look at how that claim that “The Afghan Government retains control of Kabul” holds up. In today’s New York Times, we have this:

With Kabul suffering this badly, imagine how bad it must be in the rest of the country. The war in Afgthanistan is now over 16 years old. It’s time for it to take those car keys and drive itself home, because things are going so badly there that DOD is hiding all the data it can.

On Disinformation and the Dossier Byron York Confirms that Many Names and Sources Implicated Carter Page as an...