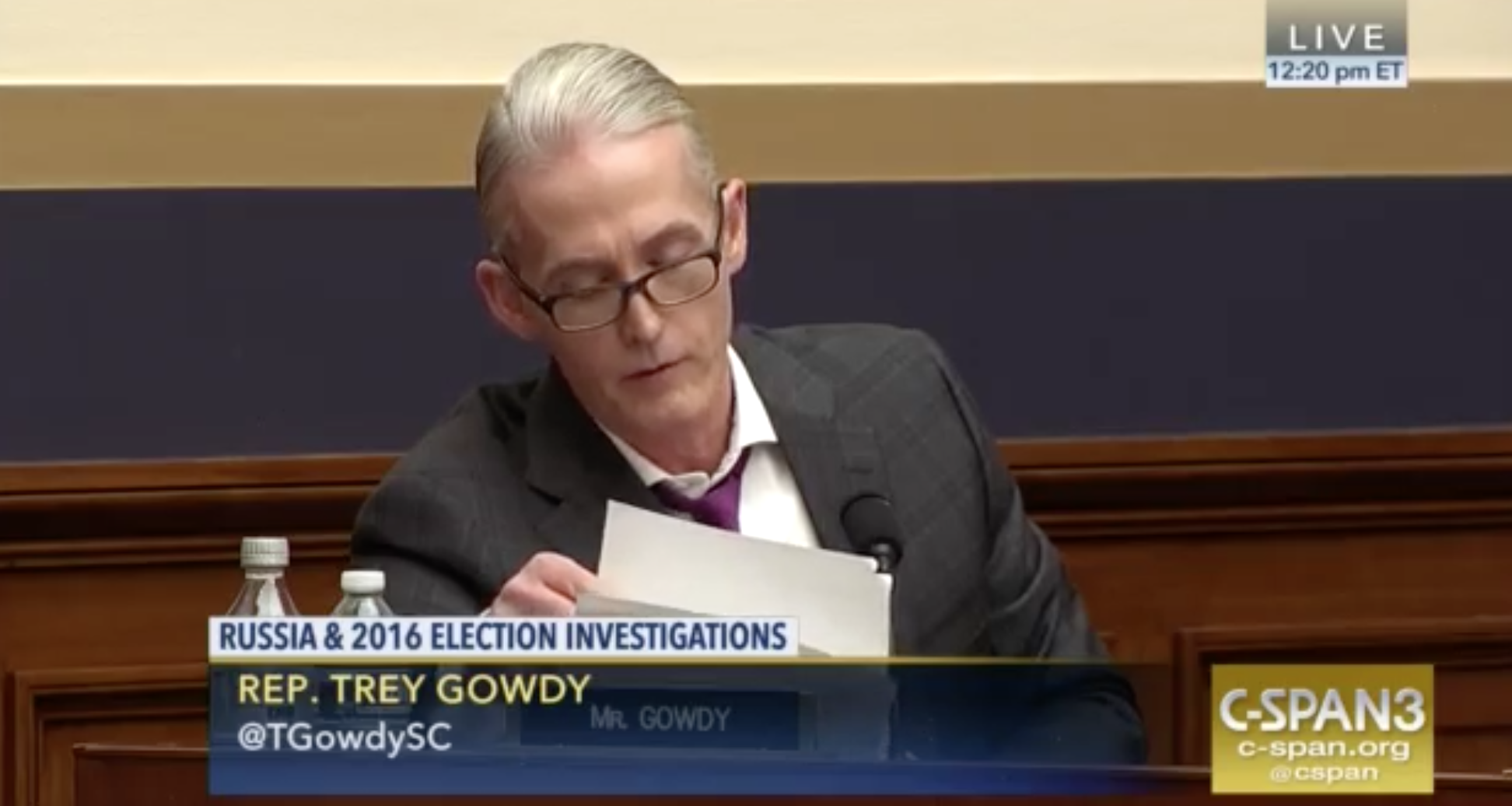 I’ve had a busy few days at other sites. I did this piece (on the dossier) at Politico and had an enjoyable appearance on Democracy Now this morning.

I want to highlight something I discussed on DN that has gotten drowned out in the rest of the day’s news: Trey Gowdy’s decision to retire, taken even as he was raising money for his reelection.

AMY GOODMAN: You know, I meant to say progressive activists, not even Democratic congressmembers, when it came to being concerned about FBI and intelligence and NSA overreach. But you mentioned Trey Gowdy. And yesterday, the Republican congressman from South Carolina, a chair of the House Oversight Committee, announced he is not going to seek re-election. He was instrumental in crafting the Nunes memo. Can you talk about the significance of him leaving Congress, leader in the Benghazi investigation, attacking Hillary Clinton, etc.?

MARCY WHEELER: Yeah, Trey Gowdy, when he’s in front of a camera, is one of the most blustery Republican partisans. But you can tell, even, for example, from the Carter Page transcript, his interview with House Intelligence Committee, that behind closed doors he actually is a competent prosecutor, which is—you know, he’s got a background in that. And he can hammer Republican witnesses.

On Sunday, on one of the Sunday shows, Trey—I think it was a Fox show—Trey Gowdy said, “You know, this memo should come out. It’s important. But my side should not use it to undermine the Mueller investigation.” And the reason he gave is that what is not being seen about the Mueller investigation is there’s a whole counterintelligence side to it. There’s a whole side of it investigating how the Russians tampered in our election. And according to Gowdy, who has seen these underlying documents, he thinks that’s an important and legitimate investigation.

Now, we don’t know fully why he decided not to run. He did cite yesterday that he’s sick of politics. But what’s interesting is, yesterday morning, he was still fundraising. So, as of yesterday morning, he was still planning on running. There’s also reports that Don McGahn, who is the White House counsel, who has been in this sort of obstructive role for Trump, as well, was discussing with Gowdy a position on the Fourth Circuit as a circuit court judge, which is something Gowdy has been interested in the past, and Gowdy turned that down. So, Gowdy, even though he is this fire-breathing partisan hack—you know, you go back to the Benghazi case—he seems to have seen something in the underlying investigation that troubles him, that his Republican partisan colleagues are not paying attention to. And so, Gowdy may surprise us, going forward. But I do think that that is an interesting development yesterday, that the one guy on the House Intelligence Committee who’s actually seen the underlying intelligence has decided to get out of the Republican partisan hackery rat race.

This piece in Politico emphasizes his disillusionment with the partisanship, especially around the Mueller inquiry. It sounds like he’s getting concerned that the GOP defense of Trump is beginning to threaten DOJ.

Gowdy has found himself butting heads in recent months with Intelligence Chairman Devin Nunes (R-Calif.) and other pro-Trump Republicans who have hinted at corruption at the FBI. He’s expressed concerns about anti-Trump texts by some FBI officials, and he has said on TV that Congress has a duty to oversee the agency. But behind the scenes he’s had to rein in some of his conservative colleagues who want to undercut the entirety of the Justice Department, which he views as essential to American life.

I know we’ve been trained to consider Gowdy the worst kind of partisan, but in some witness transcripts it’s clear he’s seeing the GOP bullshit (and, like I said on DN, he’s the one guy who has seen what Mueller is looking at).

Gowdy is trusted by many of his colleagues. And if he begins to defend the Mueller inquiry, things may begin to shift under Trump.

Remaking the World Under Cover of the Nunes Memo, Russian Spooks Sneak Openly into Meetings with...