What Journalist(s) Told Rinat Akhmetshin about the Steele Dossier?

I’ll eventually do a post on the substance of the Grassley-Graham referral of Christopher Steele to the FBI for (as I predicted) lying about his contacts with journalists. It will surprise none of you to know that I think the commentary so far, from both right and left, is garbage.

But I do want to look at one footnote from the letter that is news for other reasons. The disclosure that, in testimony to the Senate Judiciary Committee, Rinat Akhmetshin said

Unsurprisingly, during the summer of 2016, reports of at least some of the dossier allegations began circulating among reporters and people involved in Russian issues.19

19 (U) Akhmetshin Transcript, On File with the Sen. Comm. on the Judiciary (Mr. Akhmetshin informed the Committee that he began hearing from journalists about the dossier before it was published, and thought it was the summer of 2016).

They raise this for the same reasons I’ve worried about the briefings to journalists, the likelihood that as journalists started chasing the story, they might alert people who could, in turn, alert the Russians, making it easier to insert disinformation into Steele’s reporting channels.

As always with these partisan releases, precisely what Akhmetshin said matters. Did he really say he knew about the dossier, or only the allegations about a pee tape and (this is critical) that Russians were preparing to deal kompromat on Hillary? If he knew about the dossier, did he know the folks at Fusion — with whom he enjoyed booze lubricated dinners — were involved?

It’s always possible, of course, that Akhmetshin (who almost certainly has spoken with Mueller’s team at least twice) is lying, admitting he knew of the dossier but attributing it to a reporting channel that shifts blame.

But if it’s true, then there are journalists in DC who, enjoying the same kind of chatty relationships with Akhmetshin I understand a lot of journalists have long enjoyed, know that they told him about the dossier or the underlying intelligence. I think the precise date of such conversations probably needs to remain secret — particularly given the discrepancy between when Akhmetshin says he first heard about the dossier and when Steele and Glenn Simpson say they first started briefing it.

But that a journalist or journalists shared the information might be worth admitting, for the clarity it would give to the story. Two of the journalists at the center of this — David Corn and Michael Isikoff — have been all over the news. Mother Jones is even fundraising off of it. 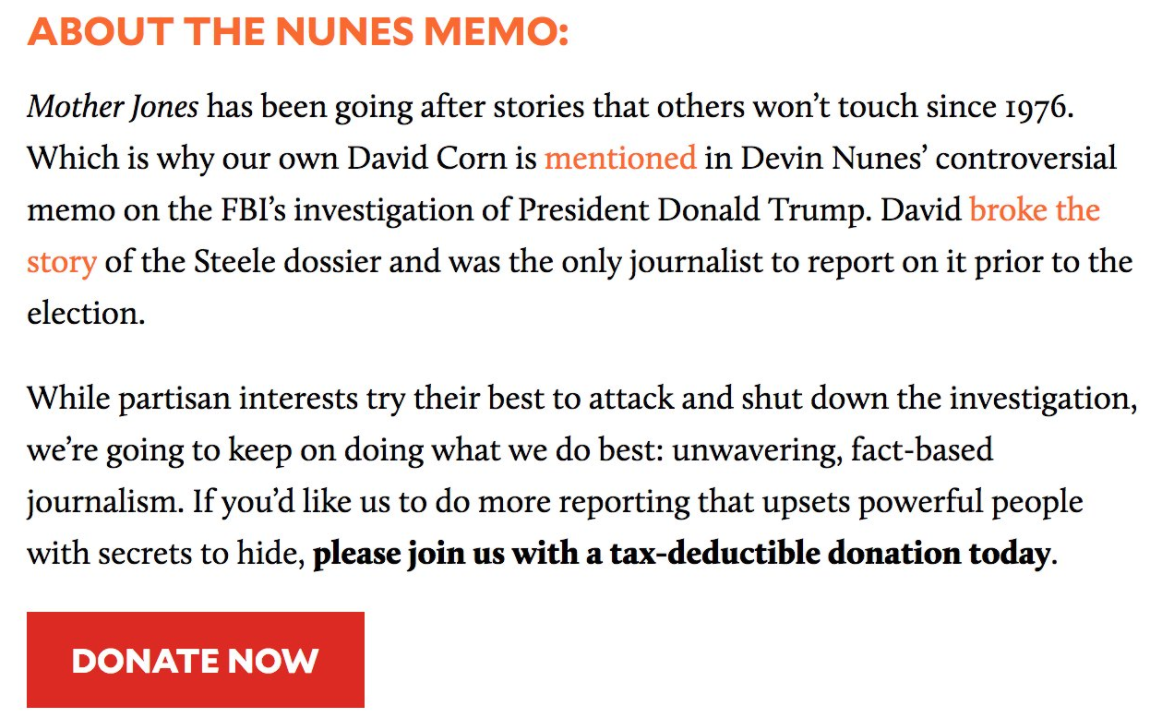 Surely confirming Akhmetshin’s story, if possible, would be newsworthy?

A New Kind of Fake News Assault: 47 Sites (Including Zero Hedge) Steal an emptywheel... How the White House’s Tolerance for Wife-Beaters Exposed That It Was Harboring...