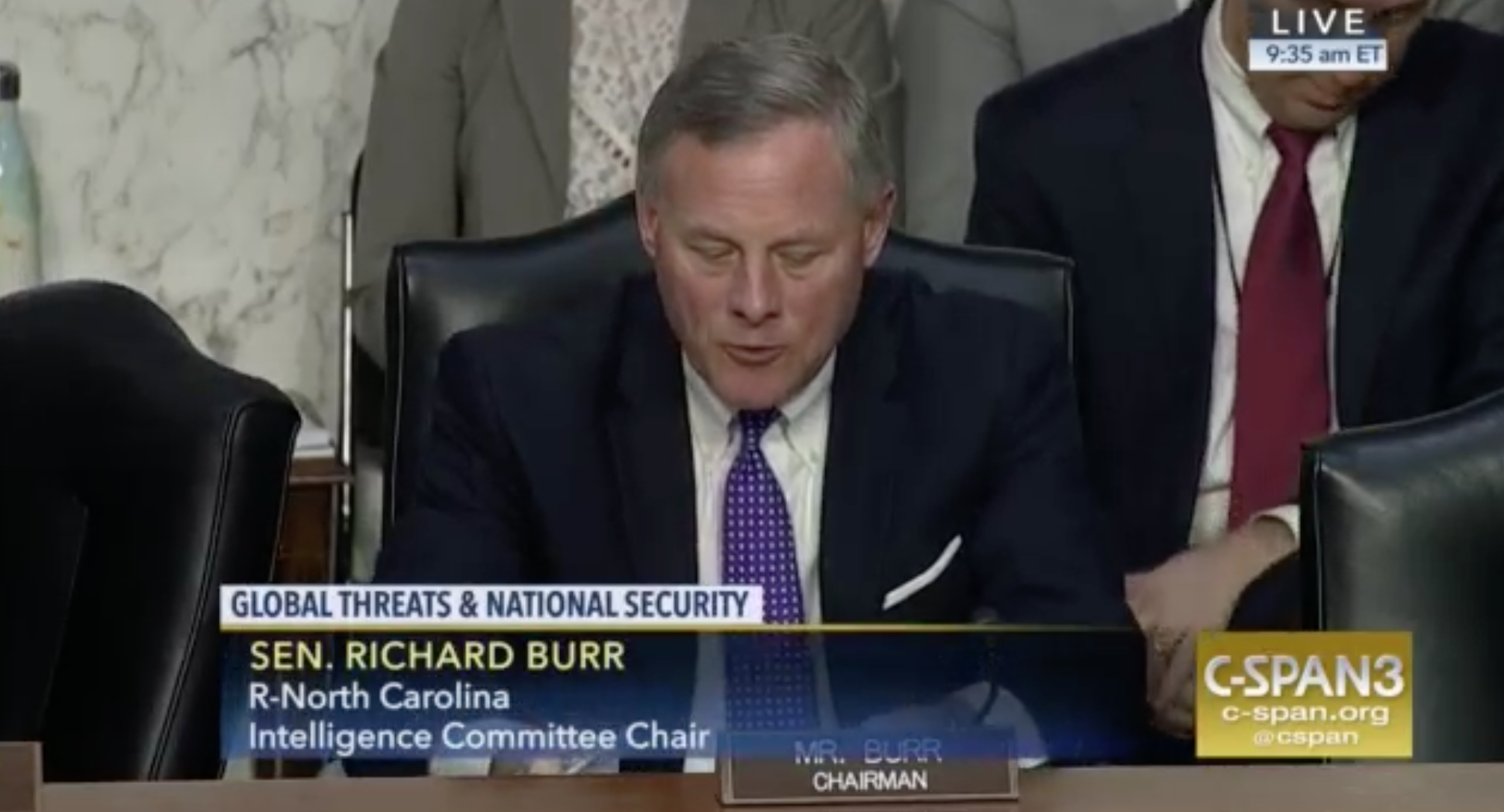 Today was the annual Senate Intelligence Committee Global Threat Hearing, traditionally the hearing where Ron Wyden gets an Agency head to lie on the record.

That didn’t happen this time.

Instead, Wyden gave FBI Director Christopher Wray the opportunity to lay out the warnings the FBI had given the White House about Rob Porter’s spousal abuse problems, which should have led to Porter’s termination or at least loss of access to classified information.

The FBI submitted a partial report on the investigation in question in March. And then a completed background investigation in late July. That, soon thereafter, we received request for follow-up inquiry. And we did that follow-up and provided that information in November. Then we administratively closed the file in January. And then earlier this month we received some additional information and we passed that on as well.

That, of course, is the big takeaway the press got from the hearing.

A follow-up from Martin Heinrich shortly after Wyden’s question suggested he had reason to know of similar “areas of concern” involving Jared Kushner (which, considering the President’s son-in-law is under investigation in the Russian investigation, is not that surprising). Wray deferred that answer to closed session, so the committee will presumably learn some details of Kushner’s clearance woes by the end of the day.

Wray twice described the increasing reliance on “non-traditional collectors” in spying against the US, the second time in response to a Marco Rubio question about the role of Chinese graduate students in universities. Rubio thought the risk was from the Confucius centers that China uses to spin Chinese culture in universities. But not only did Wray say universities are showing less enthusiasm for Confucius centers of late, but made it clear he was talking about “professors, scientists, and students.” This is one of the reasons I keep pointing to the disproportionate impact of Section 702 on Chinese-Americans, because of this focus on academics from the FBI.

Susan Collins asked Mike Pompeo about the reports in The Intercept and NYT on CIA’s attempts to buy back Shadow Brokers tools. Pompeo claimed that James Risen and Matt Rosenberg were “swindled” when they got proffered the story, but along the way confirmed that the CIA was trying to buy stuff that “might have been stolen from the US government,” but that “it was unrelated to this idea of kompromat that appears in each of those two articles.” That’s actually a confirmation of the stories, not a refutation of them.

There was a fascinating exchange between Pompeo and Angus King, after the latter complained that, “until we have some deterrent capacity we are going to continue to be attacked” and then said right now there are now repercussions for Russia’s attack on the US.

Pompeo: I can’t say much in this setting I would argue that your statement that we have done nothing does not reflect the responses that, frankly, some of us at this table have engaged in or that this government has been engaged in both before and after, excuse me, both during and before this Administration.

King: But deterrence doesn’t work unless the other side knows it. The Doomsday Machine in Dr. Strangelove didn’t work because the Russians hadn’t told us about it.

Pompeo: It’s true. It’s important that the adversary know. It is not a requirement that the whole world know it.

King: And the adversary does know it, in your view?

Pompeo: I’d prefer to save that for another forum.

Tom Cotton made two comments about the dossier that Director Wray deferred answering to closed session.

First, he asked about Christopher Steele’s ties to Oleg Deripaska, something I first raised here and laid out in more detail in this Chuck Grassley letter to Deripaska’s British lawyer Paul Hauser. When Cotton asked if Steele worked for Deripaska, Wray said, “that’s not something I can answer.” When asked if they could discuss it in a classified setting, Wray said, “there might be more we could say there.”

Cotton then asked if the FBI position on the Steele dossier remains that it is “salacious and unverified” as he (misleadingly) quoted Comey as saying last year. Wray responded, “I think there’s maybe more we can talk about this afternoon on that.” It’s an interesting answer given that, in Chuck Grassley’s January 4 referral, he describes a “lack of corroboration for [Steele’s dossier] claims, at least at the time they were included in the FISA applications,” suggesting that Grassley might know of corroboration since. Yet in an interview by the even better informed Mark Warner published 25 days later, Warner mused that “so little of that dossier has either been fully proven or conversely, disproven.” Yesterday, FP reported that BuzzFeed had hired a former FBI cybersecurity official Anthony Ferrante to try to chase down the dossier in support of the Webzilla and Alfa bank suits against the outlet, so it’s possible that focused attention (and subpoena power tied to the lawsuit) may have netted some confirmation.

Finally, Richard Burr ended the hearing by describing what the committee was doing with regards to the Russian investigation. He (and Warner) described an effort to bring out an overview on ways to make elections more secure. But Burr also explained that SSCI will release a review of the ICA report on the 2016 hacks.

In addition to that, our review of the ICA, the Intel Committee Assessment, which was done in the F–December of 06, 16–we have reviewed in great detail, and we hope to report on what we found to support the findings where it’s appropriate, to be critical if in fact we found areas where we found came up short. We intend to make that public. Overview to begin with, none of this would be without a declassification process but we will have a public version as quickly as we can.

Finally, in the last dregs of the hearing, Burr suggested they would report on who colluded during the election.

We will continue to work towards conclusions  on any cooperation or collusion by any individual, campaign, or company with efforts to influence elections or create societal chaos in the United States.

My impression during the hearing was that this might refer to Cambridge Analytica, which tried to help Wikileaks organize hacked emails — and it might well refer to that. But I wonder if there’s not another company he has in mind.

Graham and Grassley Are Seeing Christopher Steele’s Ghost Where Mike Flynn... Nothing Happens in a Vacuum: Diplomatic Scuffles and Academic Speeches in M...