A little recap of events overnight while we wait for Channel 4’s next video. Channel 4 had already posted a video on March 17 which you can see here:

Very much worth watching — listen carefully to whistleblower Chris Wylie explain what data was used and how it was used. I can’t emphasize enough the problem of non-consensual use; if you didn’t explicitly consent but a friend did, they still swept up your data

David Carroll of Parsons School of Design (@profcarroll) offered a short and sweet synopsis last evening of the fallout after UK’s Channel 4 aired the first video of Cambridge Analytica Uncovered. 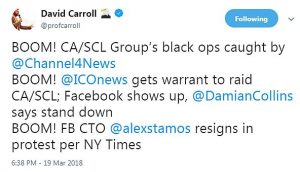 Facebook CTO Alex Stamos had a disagreement with management about the company’s handling of crisis; first reports said he had resigned. Stamos tweeted later, explaining:

“Despite the rumors, I’m still fully engaged with my work at Facebook. It’s true that my role did change. I’m currently spending more time exploring emerging security risks and working on election security.”

Other reports say Stamos is leaving in August. Both could be true: his job has changed and he’s eventually leaving.

I’m betting we will hear from him before Congress soon, whatever the truth.

Speaking of Congress, Sen. Ron Wyden has asked Mark Zuckerberg to provide a lot of information pronto to staffer Chris Sogohian. This ought to be a lot of fun.

A Facebook whistleblower has now come forward; Sandy Parkilas said covert harvesting of users’ data happened frequently, and Facebook could have done something about it.

Perhaps we ought to talk about nationalization of a citizens’ database?

“What Did the President Do and What Do His Lawyers Claim He Was Think... Trump’s Legal Team: “If the Law and the Facts Are Against You, Pound...
Scroll to top