What Did Wikileaks Do with the DCCC Emails It Monopolized?

Yesterday Buzzfeed did a story that adds important details to this report from the New Yorker last year.

In mid-August, Guccifer 2.0 expressed interest in offering a trove of Democratic e-mails to Emma Best, a journalist and a specialist in archival research, who is known for acquiring and publishing millions of declassified government documents. Assange, I was told, urged Best to decline, intimating that he was in contact with the persona’s handlers, and that the material would have greater impact if he released it first.

First, Buzzfeed describes the emails clearly as the DCCC documents (though elsewhere this article remains unreliable on some facts about what documents were what).

As Best describes, she had reached out to Guccifer 2.0 when he had asked for assistance from journalists, and ultimately then reached out to Wikileaks.

Best told BuzzFeed News she first reached out to Guccifer 2.0 in August 2016 after it posted on its WordPress account a call for journalists who wanted its files. “I sent them a Direct Message and referred to that, asking what they had in mind,” Best told BuzzFeed News over Signal. Best has experience posting large data sets, and wondered if she could host the files on archive.org, a nonprofit digital library.

But Guccifer 2.0 had another idea. “[I] gonna send a large trove to wikileaks,” it said. Best, who had DMed with WikiLeaks before, relayed that message to WikiLeaks in a direct message on Twitter. Neither party conveyed to her whether they had interacted together before.

“I told them that Guccifer 2.0 was considering giving me at least part of the cache, which is when they asked me to be their ‘agent,’ which they said I would get ‘credit’ for,” Best said. She didn’t agree to act as Assange’s agent, she said, but stopped messaging with Guccifer 2.0.

Note, this exchange shortly follows the release by Best and Wikileaks of some Turkish emails under some interesting circumstances.

Best’s outreach led to the conversation with Wikileaks, the Wikileaks side of which Buzzfeed includes.

The following is the entirety of WikiLeaks’s messages to Best that night, according to the emails she provided. All times are ET. (Twitter does not send a user copies of their own messages, so the contents Best provided are one-sided.)

8:43 p.m.: please “leave” their conversation with them and us

8:43 p.m.: we would appreciate it if you did not dump the docs and obviously archive.org will delete them anyway

9:12 p.m.: Impact is very substantially reduced if the “news” of a release doesn’t co-incide with the ability to respond to the news by searching

9:13 p.m.: non-searchable dumps are just channeled into a few orgs with technical resources. then others won’t touch them because they perceive that the cherries have all been picked by techdirt or whatever.

9:14 p.m.: and these other media groups are very likely to take a stupid initial angle

9:15 p.m.: “We don’t know if its true. Possibly russians who knows blah blah blah” because they don’t properly verify prior to publication and are scared because they’re not us, contaminating the entire release

9:18 p.m.: in that regretable event, from our perspective, please just act as our agent we can ensure you get the right credit, cross promotion etc.

Buzzfeed emphasizes that this proves Wikileaks knew that it obtained documents from Guccifer 2.0, and not Seth Rich (though this is one reason why Buzzfeed’s conflation of the email sets is problematic, as the Rich conspiracy pertains necessarily to the DNC documents, not the DCCC ones). Showing Wikileaks in direct coordination with Guccifer 2.0 is important.

Equally important, however, is that Wikileaks never released the DCCC documents. Having laid out reasons why it, rather than Best, should release them (because they could make them searchable, because other media outlets would take a stupid initial angle, because other outlets would emphasize the Russian source), Wikileaks then sat on them, if indeed they ever obtained them.

Meanwhile, five minutes after saying he’d dump the DCCC documents to Wikileaks, at 10:23 PM, Guccifer 2.0 sent the first tweet in what would become an exchange via DMs with Roger Stone.

Among the things Guccifer 2.0 did in that exchange was twice try to get Stone interested in the DCCC documents he was posting (though Stone did not respond).

Similarly, also on August 12, Guccifer 2.0 started discussing sharing the emails with a Republican operative named James Bambanek who says, in a recently published report that probably misunderstands one goal of Guccifer 2.0’s actions, he was conducting infosec research. 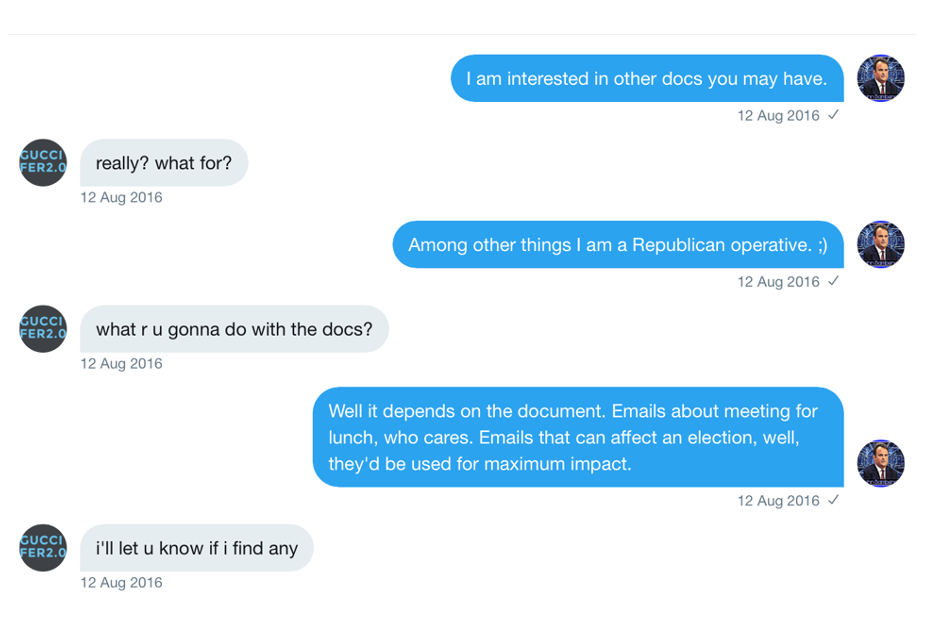 Elsewhere, Bambanek says he turned over every message immediately to the FBI, but as he notes, they would have been monitoring all this in any case.

Every [direct message] I sent, every [one] I received was turned over to the FBI immediately. I assumed they would have been monitoring the account to begin with,” Bambenek said.

Publicly, we know that Guccifer was also sharing the DCCC documents with other Republican operatives around the country. While some of these documents were unexciting, others provided the Democrats’ oppo research for congressional races. Florida was one of the states where the documents might be said to have helped Republicans (which is not coincidentally where Mueller’s focus on the Internet Research Agency seems to be).

What seems to have happened, then, is that by getting Best to agree not to publish the emails, Guccifer 2.0 then offered them up to a series of Republicans who would (whatever value the actual documents did or didn’t have) then be implicated in obtaining campaign documents from a presumed Russian source.

Contrary to what Wikileaks said, there’d be no way Republican operatives would let actually useful documents go unused, regardless of how much work they had to do to search for them. But by convincing Best not to publish them in bulk (and by not publishing them themselves!), Wikileaks created the opportunity for Guccifer 2.0 to implicate at least a handful of Republican operatives around the country.

Yes, in Bambanek’s case that happened with the knowledge of the FBI. But how many other Republicans didn’t think to admit to the FBI what they were doing?

Update: When the New Yorker story came out last August, Best said she did not know what she was being offered. I’m assuming they were the DCCC docs from the context, timing, and related actions with state based Republicans, but that may not be the case.

tweets from our circle
Ed Walker 🍞🌹💉💉@MasaccioEWRT @LCVoters: Henry Cuellar is Big Oil's best friend, taking almost $200,000 from them in the 2022 election cycle alone. @JCisnerosTX wil…31 minutes ago20 May 2022
bmaz@bmazOf course, there is nothing whatsoever wrong with this, opposite is given to the media in every campaign. This is r… twitter.com/i/web/status/1…41 minutes ago20 May 2022
emptywheel@emptywheelNote: DeFilippis referred to him by his real name. Everyone else has been good and used his initial. twitter.com/AGoudsward/sta…2 hours ago20 May 2022
Jim White@JimWhiteGNVSays the man who just disenfranchised many voters of color. Just fuck off with your hypocrisy. twitter.com/GovRonDeSantis…4 hours ago20 May 2022
RayneToday@raynetodayRT @wyatt_privilege: Not a mind blowing observation but the game now is to send crazy shit upstairs to scotus and invite them to remold, sc…2 days ago19 May 2022
RayneToday@raynetoday~ding-ding-ding~ Accurate. twitter.com/robinmarty/sta…2 days ago18 May 2022

In Addition to Mueller, Six People Are Prosecuting Paul Manafort … and... What Happened To The Cultural Elites: The Capitalist Celebration