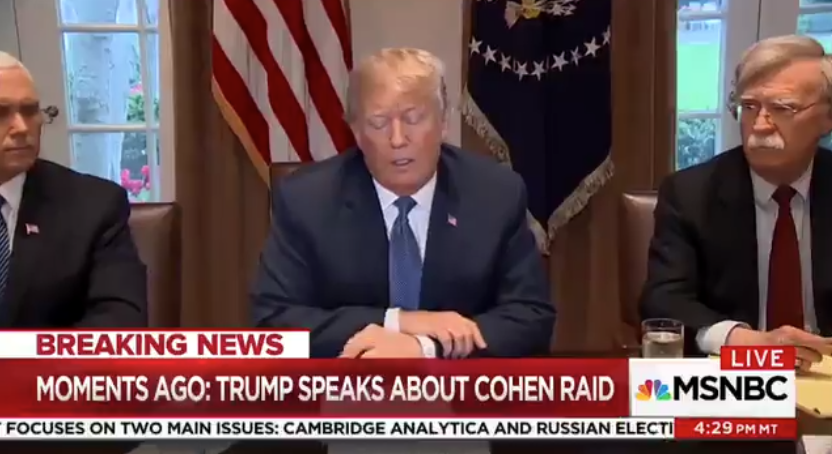 As you’ve no doubt heard, the FBI raided Michael Cohen’s office, home, and hotel today. They were looking for stuff related to his payoff to Stormy Daniels … and other things, including (per the WaPo) “possible bank fraud, wire fraud and campaign finance violations.”

Geoffrey Berman, a symptom of Trump’s corruption, is responsible

As NYT first reported, this raid was a referral from Robert Mueller, not something executed by his team.

The prosecutors obtained the search warrant after receiving a referral from the special counsel in the Russia investigation, Robert S. Mueller III, according to Mr. Cohen’s lawyer, who called the search “completely inappropriate and unnecessary.” The search does not appear to be directly related to Mr. Mueller’s investigation, but most likely resulted from information that he had uncovered and gave to prosecutors in New York.

That means Mueller would have presented the evidence to Deputy Attorney General Rod Rosenstein, who would have made the decision to hand off the lead to Southern District of NY, with the folks there buying into not the investigation but the unusual raid of an attorney’s office.

Which, in turn, means it was approved by the US Attorney for SDNY. After Trump fired Preet Bharara (who was honing in on some of Trump’s corruption), he prioritized replacing Preet’s deputy, Joon Kim (who very recently returned to his former law firm). He replaced him not by elevating someone else, but by installing someone — Geoffrey Berman — he had interviewed personally. Berman is, if anything, a symbol of Trump’s abuse, not least because he hasn’t even been nominated formally. He’s a bureaucratic end-around.

And he had to have signed off on this raid (unless he recused, which will earn him the wrath of Trump all by itself).

[T]he recusal by Berman the developer’s son, the referral from Mueller is being handled by the deputy U.S. Attorney, Robert Khuzami. He is the son of two professional ballroom dancers.

Deputy U.S. Attorney Khuzami is a Republican and even spoke at the 2004 Republican convention in support of George W. Bush.

But that will only make it harder for Trump to say he is the victim of Democrats.

And Khuzami is an expert at financial crimes, having ordered the arrest of 120 people for securities fraud in a single day during his earlier time as a Manhattan federal prosecutor. He subsequently served as head of enforcement at the U.S. Securities and Exchange Commission.

This raid is not all about Stormy Daniels, but some of it is. Which suggests Trump’s comments on Friday, in which he disavowed the payment Cohen made on his behalf, probably made this worse.

THE PRESIDENT: No. No. What else?

Q Then why did Michael Cohen make those if there was no truth to her allegations?

Q Do you know where he got the money to make that payment?

By claiming — almost certainly falsely — not to have known about the payment to Daniels, Trump probably scotched any claim Cohen might make to privilege. It also meant that Cohen either claimed to be representing Trump falsely, or is lying in sworn documents about doing so.

This raid would have had to have been approved over some time, not Friday afternoon. But one way or another, I imagine these comments made it easier for DOJ and a judge to approve the raid, at least with respect to the Stormy Daniels material.

Manafort will shortly get this raid approved for Mueller

Last week, in my analysis of the Mueller filing explaining his mandate, I suggested he was getting some things approved that weren’t relevant to the Manafort challenge but were relevant to the larger investigation.

So when Amy Berman Jackson rules against what was ultimately a desperate bid by Trump’s campaign chair, she’ll be implicitly approving of practices like “investigating otherwise unrelated allegations against a central witness” if it’s “necessary to obtain cooperation.”

And just to be sure, Michael Dreeben will be on hand for this argument.

Trump has no appropriate lawyer to this task

Trump is wailing right now about this raid.

So I just heard they broke into the office of one of my personal attorn[ey]s…It’s a disgraceful situation. It’s a total witch hunt. I’ve been saying it for a long time. I’ve wanted to keep it down. I’ve given over a million pages in documents to the special counsel. They continue to just go forward and here we are talking about Syria, we’re talking about a lot of serious things…and I have this witch hunt constantly going on for over 12 months now. Actually it’s much more than that. You could say right after I won the nomination it started.

When I saw this, when I heard about it, that is a whole new level of unfairness.

This has been going on. I saw one of the reporters who is not necessarily a fan of mine…he said this is now getting ridiculous. They found no collusion what so ever with Russia.

This is the most biased group of people. These people have the biggest conflicts of interest I have ever seen. Democrats — all. Either Democrats or a couple of Republicans who worked for President Obama. They’re not looking at the other side — Hillary Clinton… all of the crimes that were committed, all of the things that happened that everybody is very angry about from the Republican side and the independent side. They only keep looking at us.

They raided the office of a personal attorney early in the morning. It’s a disgrace. So we’ll be talking about it more.

The stock market dropped a lot today as soon as they heard the noise you know of this nonsense that was going on. It dropped a lot. It was up — it was way up. It dropped quite a bit at the end. That we have to go through that. We’ve had that hanging over us from the very, very beginning. And yet the other side they’re not even looking. And the other side is where there are crimes and those crimes are obvious — lies under oath all over the place, emails that are knocked out, that are acid washed and deleted, 33,000 emails were deleted after getting a subpoena from Congress. And nobody bothers looking at that.

Amid the wailing, Trump suggested he might fire Mueller.

“Why don’t I just fire Mueller? Well, I think it’s a disgrace what’s going on. We’ll see what happens,” Trump said. “Many people have said you should fire him. Again, they found nothing. And in finding nothing, that’s a big statement.”

As he nudges closer to firing Mueller, remember: after having chased John Dowd off, Trump has no competent defense attorney.

He may well fire Mueller. But he has no one to guide him out of the morass that doing so will cause.

The Day The Music Died In F1 Why Are Republicans Still Squealing about FISA Applications If HPSCI Report...