Earlier in the Week, Trump May Have Looked Presidential; on Friday, He Looked Like a Criminal Suspect 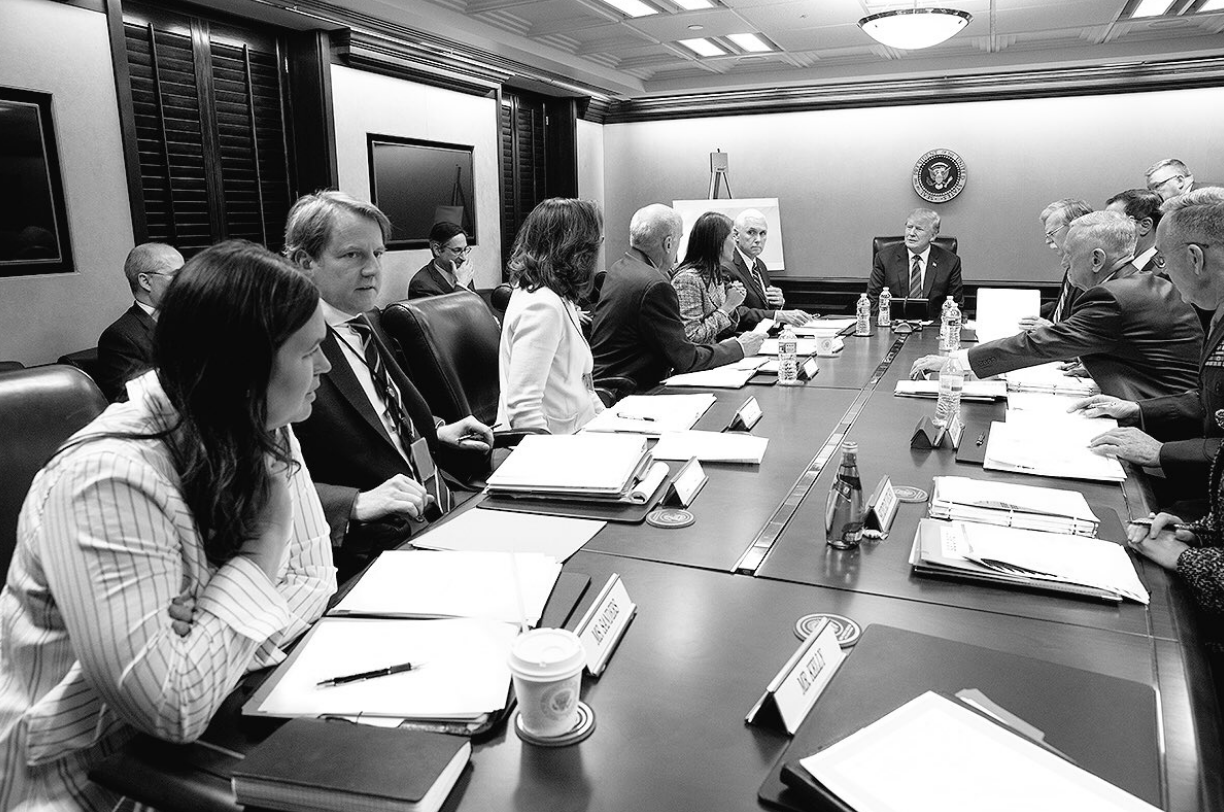 Last night the President put our adversaries on notice: when he draws a red line he enforces it. (Inside the Situation Room as President is briefed on Syria – Official WH photos by Shealah Craighead)

While she didn’t actually make the claim but implied it, the photo couldn’t have been taken “last night” (that is, Friday, just before the decision to bomb Syria), because Mike Pence was in Peru on Friday. My guess, given that Mike Pompeo is not in the frame, is it may have been taken on Thursday during the CIA Director’s confirmation hearing before the Senate Foreign Relations Committee.

In any case, the significance of Sanders using this dated photo to show Trump looking presidential has little to do with Pence. Rather, it has to do with Trump.

The White House, presumably, doesn’t have a picture of Trump looking presidential on Friday to offer (Sanders would have been better tweeting out Trump’s Friday speech).

And there’s a likely reason for that. Rather than acting presidential on Friday, Trump was acting like a criminal suspect, calling his consigliere, Michael Cohen, while he was blowing off a court hearing to hang out with mobbed up friends, to try to understand the full impact of a FBI raid on the two of them.

As his lawyers went to court in New York on Friday to try to block prosecutors from reading files that were seized from the personal lawyer, Michael D. Cohen, this week, Mr. Trump found himself increasingly isolated in mounting a response. He continued to struggle to hire a new criminal lawyer, and some of his own aides were reluctant to advise him about a response for fear of being dragged into a criminal investigation themselves.

The raids on Mr. Cohen came as part of a monthslong federal investigation based in New York, court records show, and were sweeping in their breadth. In addition to searching his home, office and hotel room, F.B.I. agents seized material from Mr. Cohen’s cellphones, tablet, laptop and safe deposit box, according to people briefed on the warrants. Prosecutors revealed in court documents that they had already secretly obtained many of Mr. Cohen’s emails.

Mr. Trump called Mr. Cohen on Friday to “check in,” according to two people briefed on the call. Depending on what else was discussed, the call could be problematic, as lawyers typically advise their clients against discussing investigations.

Reports are that Trump sees more risk from this investigation than he does from the Mueller one (I’ll post later why I think that’s not quite right, but a lot depends on what happens tomorrow in court). Whichever investigation will end up getting Trump, I agree with Adam Davidson (though he, like virtually all journalists, gets NYT’s self-appointed red line wrong) that if the FBI is able to go through Cohen’s files thoroughly, it will bring Trump’s presidency to an end.

There are lots of details and surprises to come, but the endgame of this Presidency seems as clear now as those of Iraq and the financial crisis did months before they unfolded. Last week, federal investigators raided the offices of Michael Cohen, the man who has been closer than anybody to Trump’s most problematic business and personal relationships. This week, we learned that Cohen has been under criminal investigation for months—his e-mails have been read, presumably his phones have been tapped, and his meetings have been monitored. Trump has long declared a red line: Robert Mueller must not investigate his businesses, and must only look at any possible collusion with Russia. That red line is now crossed and, for Trump, in the most troubling of ways. Even if he were to fire Deputy Attorney General Rod Rosenstein and then had Mueller and his investigation put on ice, and even if—as is disturbingly possible—Congress did nothing, the Cohen prosecution would continue. Even if Trump pardons Cohen, the information the Feds have on him can become the basis for charges against others in the Trump Organization.

This is the week we know, with increasing certainty, that we are entering the last phase of the Trump Presidency. This doesn’t feel like a prophecy; it feels like a simple statement of the apparent truth. I know dozens of reporters and other investigators who have studied Donald Trump and his business and political ties. Some have been skeptical of the idea that President Trump himself knowingly colluded with Russian officials. It seems not at all Trumpian to participate in a complex plan with a long-term, uncertain payoff. Collusion is an imprecise word, but it does seem close to certain that his son Donald, Jr., and several people who worked for him colluded with people close to the Kremlin; it is up to prosecutors and then the courts to figure out if this was illegal or merely deceitful. We may have a hard time finding out what President Trump himself knew and approved.

However, I am unaware of anybody who has taken a serious look at Trump’s business who doesn’t believe that there is a high likelihood of rampant criminality.

As well as Davidson describes this moment, I think the photo does so even better. A White House concerned first and foremost about the president’s image has no photo of him looking presidential before “he” made the decision to make an illegal military strike. And the reason for that may well be that he was far more occupied with his legal jeopardy than with doing his job.

Michael Cohen’s Claim the Steele Dossier Is False Is Not Affirmed in His... SDNY Doesn’t Think Michael Cohen Is Much of a Lawyer