In this post, I showed how the list of crimes for which Paul Manafort was being investigated mushroomed between the time FBI searched an Alexandria storage locker on May 27, 2017 and the time they searched his home using a no-knock warrant on July 27, 2017.

I also noted that Manafort seemed particularly worried about several things in the later search — such as that the government took stuff pertaining to his state of mind, that the FBI seized his iPods, and that they hadn’t given anything back.

In this post, I noted that Rod Rosenstein appeared to have included a third bullet in his description of the crimes that Robert Mueller could investigate Manafort for in his August 2, 2017 memo, written just after the later search.

Now consider this detail: the second bullet describing the extent of the investigation into Manafort has a semi-colon, not a period.

It’s possible Mueller used semi-colons after all these bullets (of which Manafort’s is the second or third entry). But that, plus the resumption of the redaction without a double space suggests there may be another bulleted allegation in the Manafort allegation.

There are two other (known) things that might merit a special bullet. First, while it would seem to fall under the general election collusion bullet, Rosenstein may have included a bullet describing collusion with Aras Agalarov and friends in the wake of learning about the June 9 Trump Tower meeting with his employees. More likely, Rosenstein may have included a bullet specifically authorizing an investigation of Manafort’s ties with Oleg Deripaska and Konstantin Kilimnik.

The Mueller memo actually includes a specific reference to that, which as I’ve noted I will return to.

The latter might be of particular import, given that we know a bunch of fall 2017 interviews focused on Manafort’s ties to Deripaska and the ongoing cover-up with Kilimnik regarding the Skadden Arps report on the Yulia Tymoshenko prosecution.

At a recent court hearing, Manafort’s team confirmed there is a third bullet (which is unredacted to them), and the government seemed to confirm (with their insistent refusal to share) that there are other documents laying out Rosenstein’s authorizations for the investigation.

Aside from a bunch of subtle details showing that Mueller continues to work closely with FBI Agents on appropriate task forces and US Attorneys officers, it includes these three redacted bullets laying out the evidence supporting probable cause for the crimes for which FBI is investigating Manafort. 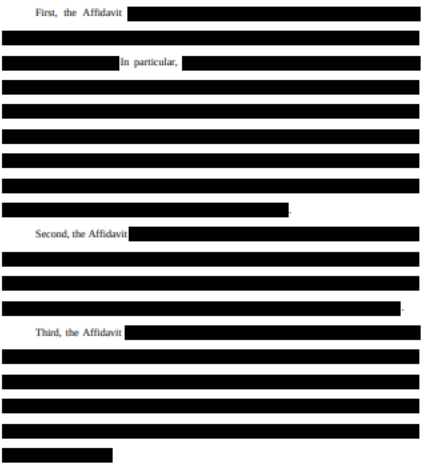 As I noted in my post speculating what the third might be, it might include either more details on the then-recently disclosed June 9 meeting, or it might provide more evidence of the way that Manafort worked with Oleg Deripaska, the former of which especially might fit under the election bullet. A likely third bullet is also the more recent money laundering Manafort allegedly conducted, as he tried to use mortgages to stave off financial ruin, which gets included in the expanded list of crimes for which Manafort was being investigated.

In any case, the affidavit (and therefore these three paragraphs) presumably lay out probable cause to support all three of Rosenstein’s bullets:

This is as much as what Amy Berman Jackson suggested in the most recent hearing (the one where Manafort confirmed there was a third bullet).

So perhaps, those three redacted bullets lay out the theory of the case: Paul Manafort had long-standing ties to Russian oligarchs and an urgent need to continue receiving their money when four Russians walked into Trump’s campaign proposing dirt on Hillary in exchange for sanctions relief.

Continuance in MalwareTech’s Case What Happened To The Cultural Elites: I Just Work Here