The Hole in the HPSCI Exoneration: Trump’s Hiring of Mike Flynn

I’ll have a lot to say about HPSCI’s attempt to exonerate Trump in their Russia report released today. But for now I want to point to a big hole in it.

The Committee found that the Trump campaign was not notified that members of the campaign were potential
counterintelligence concerns. This lack of notification meant that the campaign was unable to address the problems with each campaign member and was ignorant about the potential national security concerns. AG Lynch recalled that, during her first meeting with Director Comey and McCabe about Page, “one of the possibilities the three of us discussed was whether or not to provide what is called a defensive briefing to the
campaign, wherein there would be a meeting with a senior person with the Trump campaign to alert them to the fact
that … there may be efforts to compromise
someone with their campaign.” 102

The suggestion is that, had someone only warned Trump that people suspected of being recruited by Russians were infiltrating his campaign, they wouldn’t have been there.

Except just before this passage, the report makes clear that the Flynn investigation pre-dated his hiring as National Security Adviser, included an examination of a meeting between him, his spawn, and Sergey Kislyak as well as the better publicized RT event in Moscow. 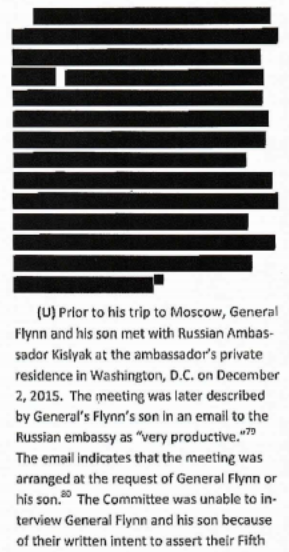 Trump can’t complain that he wasn’t warned about Flynn before hiring him, because Obama did warn him, and not just because of Obama’s problems with Flynn at DNI, but also because of concerns about his ties with Russia.

Obama warned Trump about Flynn during their Oval Office meeting on November 10, days after Trump was elected president.

“Given the importance of the job, the President through there were better people for it, and that Flynn wasn’t up for the job,” a former senior Obama administration official told CNN Monday.

But at least one former Obama official disputed that, saying Obama’s concerns were not related to the firing of Flynn from the Defense Intelligence Agency but rather in the course of the investigation into Russian interference into the 2016 election.

“Flynn’s name kept popping up,” according to a senior Obama administration source.

In other words, in the one case where we know Trump knew of a tie between a top aide and Russia, he hired the person anyway. And then ordered him to reach out to the Russians to undercut Obama’s policies.

In 2017, the Government Withdrew Three FISA Collection Requests Rather than... The Holes in Ike Kaveladze’s Trump Tower Meeting Story