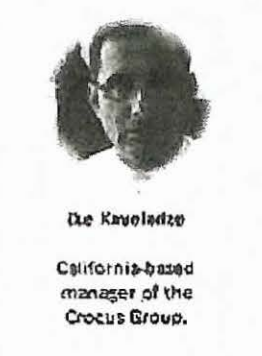 One of the things the HPSCI narrative about the Trump Tower makes clear is that the story of Ike Kaveladze, the Agalarov representative whose presence at the meeting is unexplained (indeed, the majority HPSCI report makes no effort to explain it, while the minority explicitly says he was representing the Agalarovs), doesn’t make sense.

The Committee discovered that the participants.of the June 9 meeting did not all have the same understanding as to the reasons for the meeting, with [Kaveladze] testifying that he thought it was odd that all three senior Trump campaign officials would be taking a meeting on the Magnitsky Act, a U.S. human rights law that imposes certain sanctions on Russian interests. Accordingly, [Kaveladze] called [Roman Beniaminov], a close associate of Emin Agalarov based in the United States, to inquire about the purpose

Based on this discussion, the lunch attendees believed the Trump Tower meeting was about the Magnitsky Act. of the meeting. [Beniaminov] explained that he believed the scheduled meeting at Trump Tower was about providing negative information on candidate Clinton to the Trump campaign.

While HPSCI doesn’t acknowledge it, this means Kaveladze (and, by association, Rob Goldstone) knew both sides of a quid pro quo before the meeting: dirt on Hillary in exchange for Magnitsky relief.

But then, having made the effort to learn the meeting was about dealing dirt, Kaveladze somehow became convinced again it was (only) about the Magnitsky Act during lunch right before the meeting (note, the report doesn’t address some oddities about the communication between Veselnitskaya and Kaveladze that I mention here).

Based on this discussion, the lunch attendees believed the Trump Tower meeting was about the Magnitsky Act.

After the meeting Kaveladze spoke to Aras Agalarov twice (once immediately after the meeting, per the minority report); HPSCI’s understanding of those calls, in which he claims the meeting was a waste of time, came from Kaveladze’s interview. Kaveladze claims that the “dirt” on Hillary Clinton did not come up in the discussion with Agalarov.

Kaveladze testified that he received two calls from Aras Agalarov after the meeting. During the second call, Kaveladze explained that the meeting was a “complete loss of time and about nothing.” Aras Agalarov and Kaveladze did not discuss the “dirt” on Hillary Clinton.

Except the “dirt” on Hillary is the only thing that came up in an email to his daughter about the meeting sent (curiously) on June 14.

Kaveladze also sent an email to his daughter after the meeting indicating that the “meeting was boring. The Russians did not have any bad info [o]n Hillary.” — a reference back to his conversation with Beniaminov, which he had apparently relayed to his daughter.

All of which is to say that a US-based witness HPSCI refused to call (Beniaminov) and the contemporary documentary evidence show that Kaveladze believed the meeting was about dealing dirt. But in Kaveladze’s testimony — at least according to the HPSCI retelling — he somehow got dissuaded the meeting was about dirt by a lunch meeting right beforehand, but then reconvinced it was about dirt in an email sent to his daughter on the day the Washington Post reported that Russia had hacked the DNC.

Yes, it’s true that his contemporaneous account also makes it clear the dirt was not spelled out.

The date of the email, June 14, is particularly interesting though.

As the minority report reminds, on that same day, Goldstone (the other guy who knew the meeting was about dirt and Magnitsky) sent Kaveladze an email connecting the emails with the meeting.

When news broke five days after this meeting that Russians were behind the hacked DNC emails, Rob Goldstone sent a news article to Emin Agalarov and Ike Kaveladze, “Top story right now – seems eerily weird based on our Trump meeting last week with the Russian lawyers etc”.

It’s unclear which email came first, the Goldstone one tying the Russian hack to the Trump Tower meeting offering dirt, or the Kaveladze one telling his daughter the Russians didn’t have any bad info on Hillary. The Goldstone one bears the Bates stamp HIC-KAV-00001 to 00002 while the one to Kaveladze’s daughter is Bates stamped HIC-KAV-00020, suggesting it may be later in the day (though that is in no way definitive). Given that he appears not to have been asked about this, I’m also interested in the date Kaveladze provided these emails to the committee. The story about Goldstone’s email leaked on December 7, over a month after Kaveladze’s interview, so it may be he avoided answering questions about it by providing it after the fact.

Ultimately, though, it appears that both Goldstone and Kaveladze knew the meeting involved both dirt and Magnitsky sanctions.

The majority report avoids dealing with the possibility that the dirt might be the Guccifer 2.0 emails in two ways.  First, it makes no mention of Trump’s tweet, released almost immediately after the meeting, calling for Hillary’s emails and mentioning an “in the ball park” accurate number for Hillary’s staff. And in treating the silence in the meeting about email as dirt (which, remember, had already been floated to the campaign a month and a half earlier), it oddly doesn’t mention the most obvious possibility, that non-Podesta emails came up.

The Committee received no testimony or documentary evidence indicating that the purpose of the meeting was to discuss Wikileaks, Julian Assange, the hacking of the DNC servers, and/or the John Podesta emails.

Given that this claim is sourced to Goldstone’s interview, and given that his interview definitely post-dated the time the committee received the Goldstone to Kaveladze email tying the meeting to the hack of the DNC, it seems an explicit dodge of the fact that Goldstone himself made the connection almost immediately after learning of the DNC hack.

The Hole in the HPSCI Exoneration: Trump’s Hiring of Mike Flynn Baku, Belichick and the NFL Draft