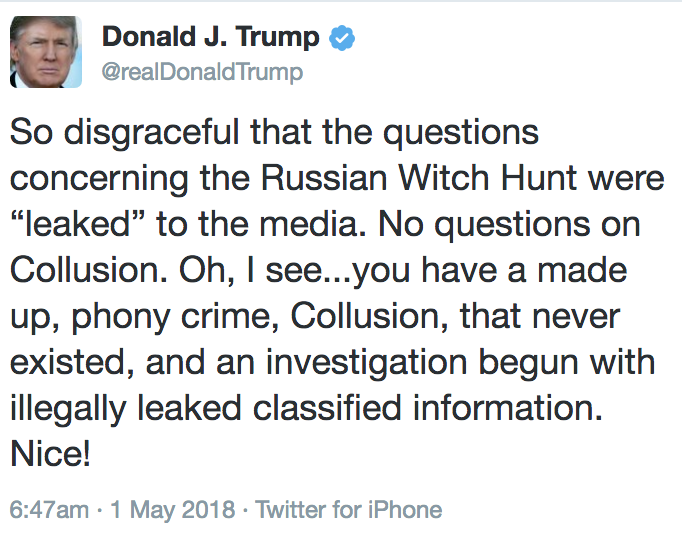 In the past, I have complained about how the NYT (including Mike Schmidt) themselves set a “red line” over which Robert Mueller shouldn’t cross, then gleefully focused on that in their reporting.

It further speculates this might cross a “red line” they put there themselves back in July, a red line commentators routinely report incorrectly as pertaining to any business interests of his.

Mr. Mueller could run afoul of a line the president has warned him not to cross. Though it is not clear how much of the subpoena is related to Mr. Trump’s business beyond ties to Russia, Mr. Trump said in an interview with The New York Times in July that the special counsel would be crossing a “red line” if he looked into his family’s finances beyond any relationship with Russia.

BREAKING: Robert Mueller would be fucking stupid if he weren’t subpoenaing this information.

As I said, while the NYT got their own reporting right, most people quoting from it misquote what Trump actually said about any red line. Here’s the exchange.

SCHMIDT: Last thing, if Mueller was looking at your finances and your family finances, unrelated to Russia — is that a red line?

HABERMAN: Would that be a breach of what his actual charge is?

TRUMP: I would say yeah. I would say yes. By the way, I would say, I don’t — I don’t — I mean, it’s possible there’s a condo or something, so, you know, I sell a lot of condo units, and somebody from Russia buys a condo, who knows? I don’t make money from Russia. In fact, I put out a letter saying that I don’t make — from one of the most highly respected law firms, accounting firms. I don’t have buildings in Russia. They said I own buildings in Russia. I don’t. They said I made money from Russia. I don’t. It’s not my thing. I don’t, I don’t do that. Over the years, I’ve looked at maybe doing a deal in Russia, but I never did one. Other than I held the Miss Universe pageant there eight, nine years [crosstalk].

SCHMIDT: But if he was outside that lane, would that mean he’d have to go?

HABERMAN: Would you consider——

TRUMP: No, I think that’s a violation. Look, this is about Russia. So I think if he wants to go, my finances are extremely good, my company is an unbelievably successful company. And actually, when I do my filings, peoples say, “Man.” People have no idea how successful this is. It’s a great company. But I don’t even think about the company anymore. I think about this. ’Cause one thing, when you do this, companies seem very trivial. O.K.? I really mean that. They seem very trivial. But I have no income from Russia. I don’t do business with Russia. The gentleman that you mentioned, with his son, two nice people. But basically, they brought the Miss Universe pageant to Russia to open up, you know, one of their jobs. Perhaps the convention center where it was held. It was a nice evening, and I left. I left, you know, I left Moscow. It wasn’t Moscow, it was outside of Moscow.

Aside from the prompted feel of the question (as if Trump or Chris Ruddy set these reporters up to pose the questions so Trump could “warn” Mueller), it pertains only to business unrelated to Russia. Trump seems to admit that the mobbed up Russians buying his condos would be pertinent, his Miss Universe contest, and his serial efforts to get a Trump Tower in Moscow.

Even the example the NYT points to today — the involvement of UAE in some pre-inauguration meetings — pertains to Russia, as one of the points of the meetings were to set up a back channel with … Russia.

I think Jared Kushner’s business ties … that’s a different issue. But as to the substance of Trump’s purported red line, nothing in today’s report says Mueller has crossed that (even if he cared about such things).

Effectively, the NYT reporters who kept harping on a limit they themselves either set or parroted back on someone’s cue served to justify Trump’s own threats against Mueller and others. They had become the news.

It appears the same is true for the extended reporting — from the NYT, among others (though this NBC report is a rare exception) —  that Mueller is primarily investigating Trump for obstruction. For some time, the press has been reporting that Mueller is honing in on an obstruction case against Trump, seemingly without understanding that some things being labeled obstruction — such as the response to Mike Flynn lying about implementing the policy concessions to Russia Trump made in the transition period — actually went to prove the quo part of a quid pro quo.

And so, when NYT published their list of questions Mueller had given Trump’s lawyers, almost a third of which have nothing to do with obstruction and many others have to with have to do with both the conspiracy case in chief and obstruction, the headline focused exclusively on obstruction.

Robert S. Mueller III, the special counsel investigating Russia’s election interference, has at least four dozen questions on an exhaustive array of subjects he wants to ask President Trump to learn more about his ties to Russia and determine whether he obstructed the inquiry itself, according to a list of the questions obtained by The New York Times.

This morning, Trump predictably pointed to the list that one of his associates leaked, claiming to be outraged by a new “leak,” and asserted, evidence to the contrary, that the questions did not address “collusion.” 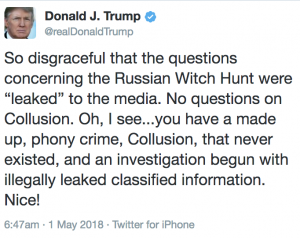 That, in turn, led a bunch of people on Twitter to try to fact check Trump, as if such “facts” would persuade either Trump (who is doing this to manipulate coverage, not to assert facts) or his followers (who wouldn’t believe the fact-checkers over Trump anyway).

Schmidt added this line to his own story, without acknowledging that his own outlet had “incorrectly” used a headline that backed Trump’s claim, even if the details themselves did not.

President Trump said on Twitter on Tuesday that it was “disgraceful” that questions the special counsel would like to ask him were publicly disclosed, and he incorrectly noted that there were no questions about collusion.

I get that Trump’s claims that the questions include none on the underlying conspiracy need to be debunked.

But one reason why he tweeted what he did is because it plays into a narrative that the press has long very credulously helped to create. What is needed now (indeed, what was needed months ago) is loud reporting that the whole obstruction emphasis was a distraction partly seeded by those being investigated for a conspiracy, a distraction in which the press was complicit.

As with the “red line” of Trump’s (non-Russian) business interests, the notion that he is being investigated only for obstruction is a tactic he has used, and used well, to play public opinion. Before trying to get the man to acknowledge public facts his team itself released, however, the press ought to consider how they’ve been doing just what Trump did this morning for months, ignoring the details that implicate him personally in “collusion.”