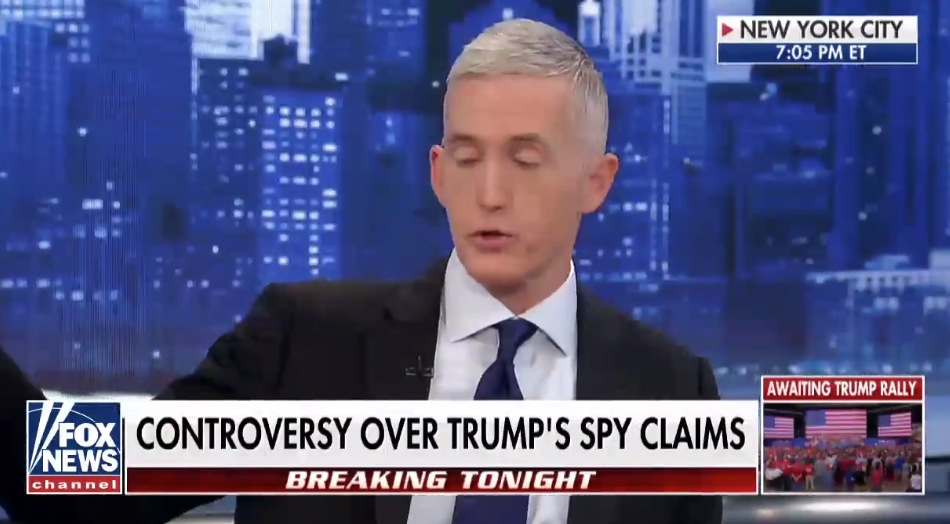 I’ve been noting Trey Gowdy’s expressed support for Mueller’s investigation since he announced his retirement back in February.

On Sunday, on one of the Sunday shows, Trey—I think it was a Fox show—Trey Gowdy said, “You know, this memo should come out. It’s important. But my side should not use it to undermine the Mueller investigation.” And the reason he gave is that what is not being seen about the Mueller investigation is there’s a whole counterintelligence side to it. There’s a whole side of it investigating how the Russians tampered in our election. And according to Gowdy, who has seen these underlying documents, he thinks that’s an important and legitimate investigation.

This Sunday, in the wake of last week’s briefing on Stefan Halper’s role in the investigation of Carter Page and George Papadopoulos (and, possibly, other aspects of the Russian investigation), Gowdy did it again, explaining that the FBI did precisely what they should have done in response to identifying counterintelligence concerns in Trump’s campaign.

GOWDY: [I]t was President Trump, himself who said, number one, “I didn’t collude with the Russia but if anyone connected with my campaign did, I want the FBI to find that out.” It looks to me like the FBI was doing what President Trump said I want you to do, find it out. He is not the target. So, when Schiff and others don’t make that clear, they’re doing the disservice to our fellow citizens. He is not the target.

MACCALLUM: But this raises the question that the president raised in this — in this one of those tweets, there were a lot of them. In which we talked about quite a bit here last week, is if that were the case, why didn’t they give him a little briefing?

GOWDY: I think, defensive briefings are done a lot. And why the Comey FBI didn’t do it? I don’t know, but Chris Wray and Rod Rosenstein have at least made it clear to us, Donald Trump was never the target of the investigation. He is not the current target of the investigation. Now, keep in mind that can all change depending on what a witness says.

But as of now, I think Chris Wray and Rod Rosenstein are stunned whenever people think Trump is the target of their investigation. I’ll leave it up to them how to brief the president, or how to brief his lawyers.

MACCALLUM: Was that point of view that you’re talking about right now, was that strengthened when you went into this briefing last week?

GOWDY: Yes, I am — I am even more convinced that the FBI did exactly what my fellow citizens would want them to do when they got the information they got. And that it has nothing to do with Donald Trump.

MACCALLUM: All right. So, given the things that were over here on your right hand, all the frustrations, do you think it’s problematic the way the president has — is tweeting about this all the time? Because he feels like he needs to get — he needs to vent. He’s got to get his message out there. Is it legally problematic in your mind what he is doing?

GOWDY: I think any time you create prior statements, you give Mueller or other folks a chance to question you on them and ask what was your factual basis, why did you say that? The president should have access to the best legal minds in the country. And I think he should take advantage of those. And he has got some really good communicators that are on his staff and at his — at his call. If I were his lawyer, and I never will be, I would tell him to rely on his lawyers and his comes folks.

MACCALLUM: All right, here is one of them, Rudy Giuliani, speaking with Bill Hemmer over the holiday weekend. Watch this.

BILL HEMMER, FOX NEWS CO-ANCHOR: What’s wrong with the government trying to figure out what Russia was up to?

RUDY GIULIANI, ATTORNEY TO PRESIDENT DONALD TRUMP: Nothing wrong with the government doing that. Everything wrong with the government spying on a candidate of the opposition party, that’s a Watergate, a spy gate. I mean, and without any warning to him. And now, to compound that, to make it into a criminal investigation bill? That’s why this is a rigged investigation.

GOWDY: There are two things wrong with what the former U.S. attorney said. Number one, no one knows whether this is a criminal investigation. Mueller was told to do a counterintelligence investigation into what Russia did. And number two, President Trump himself in the Comey memos said if anyone connected with my campaign was working with Russia, I want you to investigate it.

And it sounds to me like that is exactly what the FBI did, I think when the president finds out what happened, he is going to be not just fine, he’s going to be glad that we have an FBI that took seriously what they heard. He was never the target, Russia is the target.

MACCALLUM: So, it sounds to me as if you would advise him that there’s no problem with him sitting down with Robert Muller.

GOWDY: Oh, absolutely no. I have always said, I think you want to sit down with Bob Mueller. You’ve told us publicly there was no collusion, you’ve told us publicly there was no obstruction. Say in private what you’ve said publicly, limit the scope to exactly what the — what the Mueller memo is, but if he were my client and I’d say if you’ve done nothing wrong, then you need to sit down and tell Mueller what you know.

Mind you, Gowdy wasn’t the only one who said this. Mitch McConnell came out of the briefing (I’m still not sure whether Gowdy was in the Gang of Eight briefing or just the one with Devin Nunes) and said he supports Mueller. Nunes has gone silent, either because he, too, believes the FBI’s actions were proper, or because because he attended a briefing with the rest of the Gang of Eight, he’ll be more constrained about any bullshit claims he makes.

Nevertheless, Rudy is now targeting Gowdy in the same way Republicans have targeted Adam Schiff for supporting the investigation, even attacking him for running a never-ending investigation into Hillary.

Giuliani lashed out at Gowdy — who isn’t running for reelection — for his comments, saying that his constituents “would probably be outraged at what he’s doing.”

He then veered off-topic, adding that those constituents “probably want to figure out what the hell he did with Benghazi.” Gowdy was the chair of the House committee that looked into the attack on the US diplomatic mission in Benghazi, Libya, that left four dead, including Christopher Stevens, the US Ambassador to Libya.

“He sure screwed that one up. You got four families that do not think that Trey Gowdy did his job,” Giuliani said.

Rudy did something else in that interview with BuzzFeed’s Chris Geidner that Geidner didn’t emphasize, but deserves closer focus. He asserted that Trump’s legal team would still demand to see the files on Halper.

“We want to review all of the documentation they have for the investigation of what they call the spying on Russia and the spying — that led to the spying on the Trump campaign,” he said. He said the president’s attorneys have no plans to ask for the alleged informant’s identity — which has been reported in multiple outlets to be Professor Stefan Halper.

“Once we see what they’ve revealed,” Giuliani said of the documents, “I think we’ll need his identity even less, because I think it revealed bullshit. Which is why they don’t want to show it to us. This informant was a total waste of money, a total lark, a complete attempt to try to frame Trump, and it’s gonna show that he did nothing wrong. And that’s why they concealed it for a year.”

As Adam Schiff noted, this move demolishes any claim that the document request is about oversight; it makes it clear this request — and, I agree with Schiff, the prior ones — are all about giving Trump a peek into the investigation.

“Rudy Giuliani has effectively admitted that [House Intelligence Committee] Chairman [Devin] Nunes’ demand for information about the investigation is a charade designed only to obtain material for the Trump legal defense team,” Schiff said. “He now seeks to use the improper effort to obtain information about an investigation implicating the president as a justification to refuse to allow the president to testify.

Meanwhile, I’ve got new questions about whether Trump already has gotten information on the investigation.

Among the things Rudy has said of late, he mocked the Internet Research Agency indictment, suggesting it’s phony.

Even those Russians, the phony indictment they have of the Russians who will never come here for trial, they colluded with each other. Russians colluding. Oh wow that’s big news. Russians have been colluding since the Soviet Union to interfere in our elections.

Mind you, as I’ve noted, Yevgeniy Prigozhin’s firm, Concord Consulting, is mounting a defense. Even there, Concord and the government just jointly proposed a schedule to lead towards trial (which would take place sometime after November). So that’s happening, at least until the US butts up against evidence it refuses to share even with Concord’s US lawyers (the parties are still discussing a protection order now).

But I’m interested in Rudy’s comment for another reason. While a lot of attention has been paid to the news that the government and George Papadopoulos have moved towards sentencing, a similar announcement came this week in the Richard Pinedo case — the guy who sold identities that IRA used to create troll accounts. I have no idea what the Papadopoulos move means, but with Pinedo, I’ve wondered what cooperation he offered to get the plea in the first place. And I’ve wondered whether the move to sentencing actually means Mueller has finished any investigation of Campaign Official 1, 2, and 3 named in the indictment.

Which is to say that I find the timing of Rudy’s mockery of the IRA indictment, which is a real description of the damage Russia did, to be of interest.

The Government Refuses to Name FBI Agent Accused of Deceit in MalwareTech C... How the Mueller Team Thinks of ConFraudUs