On the Eve of the June 9 Trump Tower Meeting Anniversary, Putin Tells Trump to Keep His Campaign Promises 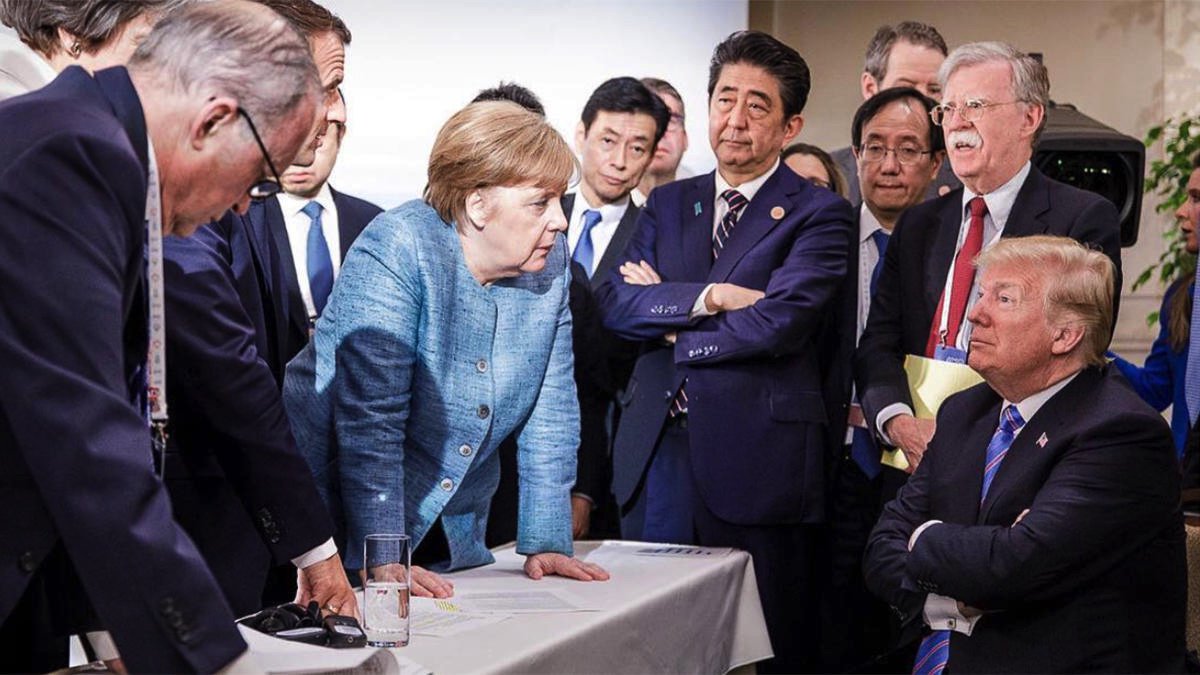 I’ve long argued that Vladimir Putin and Donald Trump engage in a kind of signaling, perhaps fueled by some kind of back channel.

With that in mind, I wanted to look at the last few days of public statements. First, in an interview recorded Thursday, Putin was asked whether he was beginning to prepare for a summit with Trump. Among other things, Putin said that Trump knows how to listen even in spite of what the reporter cued as “domestic pressure,” and fulfills his campaign promises. Putin said Trump promised to improve Russian-American relations but the ball was in the American court. (This WaPo story on the interview may have better translations of the Russian.)

Two short clarifications on the events of the last week, and I understand that there is very little time. Recently, on the air of “Vesti on Saturday”, information appeared with reference to The Wall Street Journal, which, in turn, referred to sources in the White House that the Americans had begun training – as they say, at an early stage – to Trump’s meeting with you . Have you started this training?

“This was discussed from the very beginning, after the election of Mr. Donald Trump as President of the United States.” And we from the very beginning responded to this, that we believe that such personal meetings are expedient, and not only possible. We met with the President of the United States at international venues. Of course, this does not give an opportunity to give due attention to Russian-American relations. In general, I think this meeting is useful. The only question is that the domestic political situation in the United States allows this.

– And how to deal with them, given that Trump is largely hostage to the domestic political process? Even if you meet and agree, they will let him carry out what you potentially negotiate?

“The experience I have with the President of the United States suggests that, despite the fact that his actions are often criticized, especially recently, including in the international arena and in the sphere of the economy, after all this experience tells me that he is a thoughtful man, he knows how to listen and responds to the arguments presented by the interlocutor. All this gives me reason to believe that dialogue can be constructive.

– Recently he received the closest allies: German Chancellor Angela Merkel, French President Macron. And the meetings, especially with Macron, were caress in the flesh, embraces, almost kisses and so on. And then it takes literally a week and a half, and it was worthwhile for the Europeans to raise their voice, including, I think, because of this, what you call sanctions, in particular, increased tariffs for aluminum and steel , is introduced . Are not you afraid of such “affectionate” embraces of Americans who now say: let’s prepare a meeting, and then you will meet with Trump, you will be exposed to such conditions. Or with you this will not work?

– The fact is that this does not pass with anyone. And the relationship between the leaders of states should be acceptable, civilized. But this does not preclude the adoption of decisions that this or that leader consider important and expedient for his country. It is possible to treat differently the decisions that are made in the United States, including the US president. You can criticize. Indeed, there is much that deserves criticism. But there is one circumstance about which I have already spoken: Trump fulfills his promises given to them during the election campaign.

– With one exception: to improve Russian-American relations.

On Friday, Trump said that Russia should be readmitted into the G-7, just before he premised leaving the G-7 early based on whether the other countries capitulate on tariffs.

You know, whether you like it or not — and it may not be politically correct — but we have a world to run. And in the G7, which used to be the G8, they threw Russia out. They should let Russia come back in. Because we should have Russia at the negotiating table.

Q Mr. President, why did you decide to cut (inaudible) short?

THE PRESIDENT: Say it? What?

Q You’re leaving a little early from the summit. Why did you decide (inaudible)?

Look, all of these countries have been taking advantage of the United States on trade. You saw where Canada charges our dairy farmers 270 percent tariffs. We don’t charge them, or if we do, it’s like a tiny percentage. So we have to straighten it out.

We have massive trade deficits with almost every country. We will straighten that out. And I’ll tell you what, it’s what I do. It won’t even be hard. And in the end, we’ll all get along.

Trump acted like a sullen toddler throughout the G-7, agreed to the communique, then backed out, blaming Justin Trudeau, ostensibly for publicly saying Canada would adopt retaliatory tariffs in response to Trump’s steel tariffs. (Trudeau had spoken most forcefully against readmitting Russia). On leaving, he reiterated his support to readmit Russia, even in spite of their actions in Crimea.

Q Mr. President, David Herszenhorn with Politico Europe. Just to come back to Russia for a second. Something that happened that got them kicked out of the G8 was the invasion and annexation of Crimea. Do you think that Crimea should be recognized as Russian (inaudible)?

THE PRESIDENT: Well, you know, you have to ask President Obama, because he was the one that let Crimea get away. That was during his administration. And he was the one that let Russia go and spend a lot of money on Crimea, because they’ve spent a lot of money on rebuilding it. I guess they have their submarine port there and such. But Crimea was let go during the Obama administration. And, you know, Obama can say all he wants, but he allowed Russia to take Crimea. I may have had a much different attitude. So you’d really have to ask that question to President Obama — you know, why did he do that; why did he do that. But with that being said, it’s been done a long time.

Q But you would allow Russia back into the G8 with Crimea still (inaudible)?

THE PRESIDENT: I would rather see Russia in the G8 as opposed to the G7. I would say that the G8 is a more meaningful group than the G7, absolutely.

As Putin was leaving the Shanghai Cooperation Organization, after making comments about Trump’s trade wars hurting Europe, Putin again said he was ready to meet, though said it is important that the summit be “filled with specific content.”

Question: Mr President, there is real drama unfolding around the G7 summit in Quebec and inside the G7 itself: disagreements over Russia’s possible return, over tariffs, and more controversy. In this regard, how do you assess the proposal made by Trump and the Italian Prime Minister on Russia’s return to the format, given that the purchasing power parity in the SCO is actually higher than in the G7?

Vladimir Putin: As for Russia’s return to the G7, or G8 – we have never withdrawn from it. Our colleagues refused to come to Russia at some point for well-known reasons. We would be happy to see everyone in Moscow, they are welcome. That is first the first thing.

Second. As for the efficiency and volume of the economy, indeed, the purchasing power parity (this is IMF data) of the countries of the Shanghai Cooperation Organisation is already higher than in the G7 countries. Yes, it is, the PPP is higher.

True, the seven are still richer in per capita income, as they say, but the SCO economies are larger, and their population is much larger, too – half the world’s population.

As for the various difficulties in the negotiation process within the G7, I need to take a look at this, I do not know the details. Of course, this is also of interest, these are the largest economies in the world.

We can see that there are internal problems there. Well, it happens. You know, when I look at our debates in the EAEU, we also have disputes and do not unanimously sign everything at the same time. I think this is common practice. It is necessary to deal with this calmly and without any irony.

I would draw attention to one more circumstance, which, in my opinion, is more significant than any emotional outbursts. What do I mean? As far as I know, the President of the United States said the US is considering the possibility of regulating the additional supply of automotive equipment in the US market.

This is a serious matter. This can really hurt the economic interests of so many countries, above all European, of course. Well, let us see how things will really unfold. This is of significant importance for the entire world economy.

Question: There have been reports that Austria is ready to host the US-Russia summit between you and Donald Trump. Can you confirm this? Perhaps you discussed this when you were in Austria? And when will you meet with Trump? Everyone is looking forward to it. Many problems have accumulated.

Vladimir Putin: The President of the United States has repeatedly said that he considers this meeting expedient, and I agree that this is indeed the case. I can reiterate, in our last telephone conversation he expressed his concern about the threat of a new round of the arms race. I agree with him.

But to discuss this specifically, our respective foreign ministries need to work, and experts need to work very closely together. Personal meetings are certainly necessary as well. As soon as possible. As soon as the American side is ready, this meeting will be held immediately, depending on my work schedule.

About the location. We did not talk about this in detail, but many countries are willing to render such assistance to us, including several European countries, Austria among them. I have not heard anything else. But I think this is a technicality. What is important is that the meeting, if it takes place, is filled with specific content.

Given the way Trump blew up the G-7, I really wonder whether Putin has a greater threat over Trump than we know — something far, far greater than the goddamned pee tape. Trump has always seemed anxious to reassure Putin that he, himself, is not under investigation (indeed, that seemed to be one reason Trump raised the Comey firing at the May 10, 2017 meeting with Sergei Lavrov). It’s almost as if, as Robert Mueller gets closer and closer to Trump, Putin raises the stakes as well.

And this weekend, after Putin demanded that Trump keep his campaign promises, Trump made havoc of a key alliance.

Whatever Putin has over Trump, Trump appears more afraid of Putin than he is of Mueller.

On the Tactics of the Latest Manafort Indictment Democracy Against Capitalism: Introduction to New Series