By January, Trump Believed Manafort Could Flip on Him; Since Then, Trump Learned Mueller Wanted to Know about Manafort’s Requests to Russia for Help 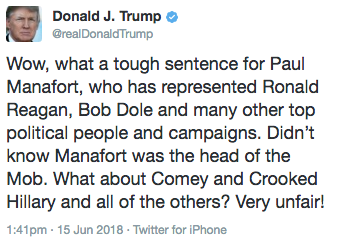 I don’t pretend to know Paul Manafort’s psyche or the many competing pressures he is experiencing right now. So I will not pretend to know whether Manafort will seek a plea deal with Mueller, either now or after sitting in the pokey for some time, or after Judge Ellis rules on the last remaining challenges to Mueller’s authority, which is likely the only way short of pardon Manafort will avoid conviction and imprisonment on his corruption charges.

But I agree that the chances he will seek a plea deal increase now that he is in jail.

In the wake of his jailing yesterday, I’ve seen some discussion about whether he (and Michael Cohen, who is openly telegraphing he’d like to start plea negotiations) can flip. That is, smart people are raising real questions whether Paul Manafort has anything to offer Mueller in a plea deal.

I don’t pretend to know what Mueller’s view on that is, either, or whether it changed in the wake of Rick Gates pleading guilty back in February (though I did entertain the question last month).

But I do think this story, from January, deserves reconsideration. In it Howard Fineman laid out the strategy with respect to the Russian investigation Trump has been pursuing ever since, culminating in his claims over the last few days about the DOJ IG Report. He planned then and has set out since to discredit the FBI and the Mueller investigation rather than to fire anyone else.

Trump — who trusts no one, or at least no one for long — has now decided that he must have an alternative strategy that does not involve having Justice Department officials fire Mueller.

“I think he’s been convinced that firing Mueller would not only create a firestorm, it would play right into Mueller’s hands,” said another friend, “because it would give Mueller the moral high ground.”

Instead, as is now becoming plain, the Trump strategy is to discredit the investigation and the FBI without officially removing the leadership. Trump is even talking to friends about the possibility of asking Attorney General Jeff Sessions to consider prosecuting Mueller and his team.

We now know Fineman’s story came in the immediate wake of a letter to Mueller making fairly absurd arguments about why Trump couldn’t be interviewed and, more importantly, providing illogical explanations for some of the actions he had taken. The letter is important because whereas an earlier June 2017 letter imagined any investigation into Trump constituted “a preliminary inquiry into whether the President’s termination of former FBI Director James Comey constituted obstruction of justice,” by January Trump’s lawyers recognized Mueller needed to ask Trump about both “collusion” and obstruction of justice.

As I noted at the time Fineman’s piece came out, though, the far more interesting detail than Trump’s strategy to beat back a “collusion” investigation is that multiple Fineman sources (Chris Ruddy, who I think serves as Trump’s more rational brain, was a source for this story) report that Trump had considered whether Manafort would flip on him and had concluded that he would not.

He’s decided that a key witness in the Russia probe, Paul Manafort, isn’t going to “flip” and sell him out, friends and aides say.

We have since learned that Trump had John Dowd offer pardons to both Mike Flynn and Manafort and there’s reason to believe that Manafort remains in a joint defense agreement with Trump. So Trump’s belief that Manafort wouldn’t flip on him likely derived from tangible discussions and not just gut feel.

At the time he was telling people Manafort wouldn’t flip, Trump would have known that Mueller was interested in his involvement in “the statement of July 8, 2017, concerning Donald Trump, Jr.’s meeting in Trump Tower;” Trump’s lawyers believed that Mueller had seen evidence that would lead him to conclude that, he “dictated a short but accurate response to the New York Times article on behalf of his son.” Trump also worked hard (and has been assisted consistently by the press in doing so) to spin the question of his involvement in the June 9 meeting as being about “a private matter with the New York Times,” and not a question about his conversations with Vladimir Putin about the statement.

But nothing else that Mueller had communicated to Trump’s lawyers (if we can believe Jay Sekulow and John Dowd’s understanding of their January 8 conversation with Mueller’s team) indicated an interest in matters even remotely related to Paul Manafort.

Which is to say in January, Trump had reason to believe that Manafort might have information that incriminated him independent of anything Mueller’s team had told him.

Of course, since then, Trump has far more reason to fear Manafort seeking a cooperation agreement. That’s because Mueller has since told Trump’s team things that confirm they know things that implicate Trump’s interactions with Manafort directly — and therefore place a premium on any testimony he’d give. Piggy-backing off the questions (Jay Sekulow thinks) Mueller wants to ask Trump, here are a bunch of questions that Mueller likely would like Manafort to explain about Trump.

Those are all damning enough. But the most damning question that we know Mueller wants to ask both Manafort and Trump is about the former’s outreach to Russia asking for help with the election. According to Sekulow, Mueller wants to know, “What knowledge did [Trump] have of any outreach by [his] campaign, including by Paul Manafort, to Russia about potential assistance to the campaign?”

Manafort knows the answer to that question.

Trump learned three months ago that Mueller had reason to believe Manafort had reached out to Russia for help and wanted to know if Manafort had shared details about that effort with Trump (or if Trump learned about it via some other means).

But at least two months before he formally learned that, Trump was telling his aides and friends that Manafort had information that could incriminate him.