CNN’s David Gelles has an instructive tweet this morning showing how the rate at which Trump tweets about the Mueller “witch hunt” is accelerating. 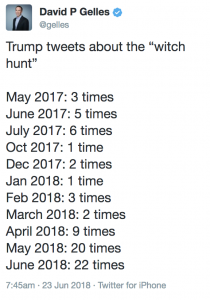 Assuming this includes this morning’s two “witch hunt” tweets, Trump is on pace to use the phrase 28 times by the end of the month, though I bet he’ll continue to accelerate the use of it in the week remaining in the month.

The Mueller investigation is, I suspect, coming to a head.

I don’t claim I know how it will turn out. The president has an enormous amount of power and his flunkies in Congress promise they’re about to end Rod Rosenstein’s bend-don’t-break defense by impeaching him (though Rosenstein and Chris Wray have just thrown more documents out to slow the Republicans). It’s certainly possible that Trump will make a last ditch effort to undercut the Mueller investigation and that effort will be competently executed and none of the secondary fall-back defenses Mueller has put into place will work. For now, though, the Trump team seems intent on a delay and discredit strategy, which won’t stave off any imminent steps.

So we shall see whether Trump succeeds in undercutting the investigation. I keep thinking, “that’s why they play the game,” but this is no game.

There are a number of reasons I think Mueller’s investigation is coming to a head. But consider one detail. I’ve long explained that Mueller seems to be building a series of Conspiracy to Defraud the United States indictments that will ultimately incorporate the entire Russian operation (and may integrate the Trumpsters’ international self-dealing as well). As Mueller’s team has itself pointed out, for heavily regulated areas like elections, ConFraudUs indictments don’t need to prove intent for the underlying crimes. They just need to prove,

(1) two or more persons formed an agreement to defraud the United States;

(2) [each] defendant knowingly participated in the conspiracy with the intent to defraud the United States; and

(3) at least one overt act was committed in furtherance of the common scheme.

Let’s see how evidence Mueller has recently shown might apply in the case of Roger Stone, Trump’s lifelong political advisor. We already knew that Stone had communications that he did not immediately disclose with Guccifer 2.0 and Wikileaks. With both, Stone has contributed to and reinforced claims the entities were not Russian operations, though his conversion about the source of the Hillary emails was pretty sudden and curiously timed.

Now we know that in May, Stone had lunch with someone calling himself Henry Greenberg offering dirt on Hillary. His explanation — based only on the texts that Michael Caputo was asked about in a Mueller interview — is not that he didn’t entertain the offer, but that he didn’t take Greenberg up on the offer as made in late May because Greenberg was asking for big money. 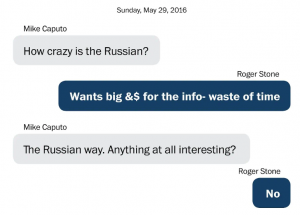 Both clearly recognized Greenberg as a Russian, therefore a foreigner offering something of value during an election.

Bizarrely, in trying to rebut the import of this exchange publicly, Caputo and Stone are doing nothing more than working the public refs, claiming to assume this was an FBI sting. Mueller knows whether it was an FBI sting, and there’s virtually no way he’d be asking questions about it if it were (particularly if Stone really didn’t take the bait). In short, Stone has no justification for this he’s willing to offer publicly; instead, he’s just adopting the SpyGate narrative in an attempt to discredit the investigation. And that’s assuming there were no follow-ups or other damning texts that didn’t involve someone willing to leak them to the press.

And all that happened before Peter Smith came on the scene, someone who, unlike Donald Trump, was willing to spend money for such things, an operation Stone is suspected of being involved in but which he studiously avoids mentioning when trying to explain himself. Smith did obtain emails from people Matt Tait advised him might be part of a Russian operation, and when he couldn’t validate them, sent them on to Wikileaks.

Which is to say Stone repeatedly entertained offers from foreigners illegally offering dirt that would benefit the Trump campaign — Greenberg, Guccifer 2.0, possibly Peter Smith’s Dark Web hackers. He may even have exhibited a belief that Australian Julian Assange had and could release the latter dirt, possibly with the knowledge they came from Russians.

So we’ve got Stone meeting with other people, repeatedly agreeing to bypass US election law to obtain a benefit for Trump, evidence (notwithstanding Stone’s post-hoc attempts to deny a Russian connection with Guccifer 2.0 and Wikileaks) that Stone had the intent of obtaining that benefit, and tons of overt acts committed in furtherance of the scheme.

And all that’s without leaning on the the other stuff Mueller found on Stone’s phone, which Stone is also trying to explain away by public conspiracies (in this case that the phone content was obtained with a FISA order rather than with a probable cause warrant obtained on March 9).

This is just one of the people Mueller has publicly focused on in recent days. We could lay out similar arguments for Michael Cohen, Paul Manafort, and Brad Parscale, at a minimum. Mueller had — and acted on — probable cause warrants covering five AT&T phones in March, all of which probably had close ties to Rick Gates. Assuming those targets are distributed proportionately with the US population, he’s likely to have obtained warrants for as many as 15 phones just in that go-around.

So if Roger Stone is any indication, the Mueller investigation may soon be moving into a new phase.