There are two telling details that John Solomon left out of this story, suggesting Jim Comey blew an opportunity to prevent the damage done by WikiLeaks’ Vault 7 leak (and, purportedly, to learn the “real” source of the DNC emails), based on a “trove” of documents but posting only fragments of 5. First, Solomon doesn’t include this text, showing Adam Waldman issuing an extortion threat stating Assange “is going to do something catastrophic for the dems, Obama, CIA and national security.” 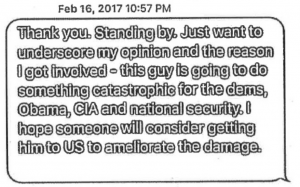 Solomon is also silent about the recent indictment of anti-Obama former CIA hacker Joshua Schulte for stealing all these CIA files. Notably, Solomon doesn’t note that as this was going on, the FBI had obtained probable cause search warrants against Schulte. Having left out those key details (and surely, a bunch of other once included in his “trove” that don’t help the latest right wing narrative), Solomon produces the convenient narrative that Jim Comey personally hurt the government.

“He told me he had just talked with Comey and that, while the government was appreciative of my efforts, my instructions were to stand down, to end the discussions with Assange,” Waldman told me. Waldman offered contemporaneous documents to show he memorialized Warner’s exact words.

Waldman couldn’t believe a U.S. senator and the FBI chief were sending a different signal, so he went back to Laufman, who assured him the negotiations were still on. “What Laufman said to me after he heard I was told to ‘stand down’ by Warner and Comey was, ‘That’s bullshit. You are not standing down and neither am I,’” Waldman recalled.

Solomon pays no consideration to the ongoing investigation, no consideration to the fact that if Comey stood down, he did so in the face of threats to the Democrats (though it’s not clear why they’d be at fault), which as always is contrary to the hoaxes against Comey. More importantly, Solomon doesn’t answer the question posed, but not answered, here: whether Assange was seeking to meet at a cafe in London, or whether he wanted to come to the US and get a pardon once he got here.

The real punchline — the one we may see come back — is the claim that Jim Comey, on top of refusing an extortion attempt directed at the Democrats, also prevented — or maybe this isn’t about the FBI at all — from learning the real story behind the DNC hack.

Not included in the written proffer was an additional offer from Assange: He was willing to discuss technical evidence ruling out certain parties in the controversial leak of Democratic Party emails to WikiLeaks during the 2016 election. The U.S. government believes those emails were hacked by Russia; Assange insists they did not come from Moscow.

Soon, the rare opportunity to engage Assange in a dialogue over redactions, a more responsible way to release information, and how the infamous DNC hacks occurred was lost — likely forever.

In honesty, this looks like an effort to set up the next campaign to suggest that Comey prevented the “truth” about the DNC hack from coming out because it would undermine the alleged Witch Hunt into Trump. It also looks like the first of three efforts to tee up the alternate explanation for the DNC hack in exchange for a Trump pardon, which resumed by August (and therefore which wasn’t a forever thing).

It also makes it clear that Vault 7 was entirely about extortion.