Yevgeniy Prigozhin Doubles Down on Lawfare as Intelligence Collection

I realize that the Concord Management defense in the Mueller indictment is intended to be nuisance lawfare. As noted, Mueller even moved four DOJ attorneys onto the team to manage with an onslaught of such nuisance filings.

But I am rather fascinated by the fight over the protective order.

As I noted, back on June 13, Mueller’s team objected to Concord’s demands that they get to share information with Yevgeniy Prigozhin without first requiring him to come to the US to get the intelligence. In a typically snotty response, Concord not only demanded that they get to share the information, but specifically requested they not receive all the personal identifying information in discovery; they just want the more substantive stuff showing informants and networks of communication. I took it as a concession that Prigozhin didn’t need the PII, because he already stole it, so the only thing new he would need is the stuff with intelligence value. 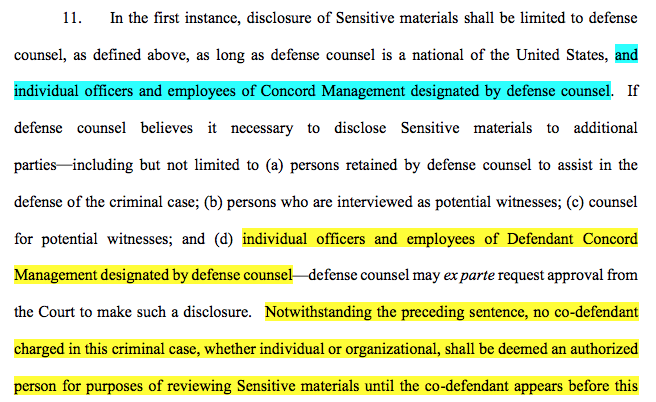 As Reed Smith has already made clear, there are only two people at Concord they want to share information with. One is Prigozhin, a co-defendant.

Finally, during the June 15, 2018 hearing, the Court asked defense counsel for information regarding the number of officers and employees of Defendant Concord. Concord has two statutory officers as required under Russian law, a General Manager and a Chief Accountant. The General Manager is co-defendant Yevgeniy Prigozhin, who has decision making authority. The Chief Accountant is not responsible for the day-to-day activities of the company and does not have decision-making authority. Undersigned defense counsel has represented to the Special Counsel’s Office, at present defense counsel needs to disclose discovery materials to only two individuals at Concord, Mr. Prigozhin, and the Head of the Legal Department (who is not a co-defendant and does not have decision making authority).

It’s the two other details that give up the game though. First, the defense not only wants to share information with someone who won’t show up to face his charges, but they also want to explicitly avoid being bound by the jurisdiction of the court.

That is, Reed Smith is saying they want to share information with the Head of Concord’s Legal Department and Prigozhin without either having to be bound by the jurisdiction of the court, which would make the order virtually unenforceable.

Reed Smith has made a show of agreeing that none of this stuff will leave the country. They’re just refusing to sign a document that will prevent, say, the unnamed Head of the Legal Department from sticking stuff in his socks and taking it back to Prigozhin (who’s not going to show up to the US to read any of this), and with him, Putin.

Honestly, I think the question of whether Prigozhin can be prohibited from helping to defend his corporation without showing up to the US to be arrested will be an interesting legal fight.

Here’s the thing: First, I don’t think Dabney Friedrich is dumb enough to fall for the two little moves at the end, and I assume she’ll guard her own authority enough not to invite some Russian lawyer to abuse her authority.

Moreover, given that her interim protective order limited all review of sensitive materials to the defense counsel, see seems inclined to side with Mueller’s team.