Peter Strzok’s Out of Scope Polygraph 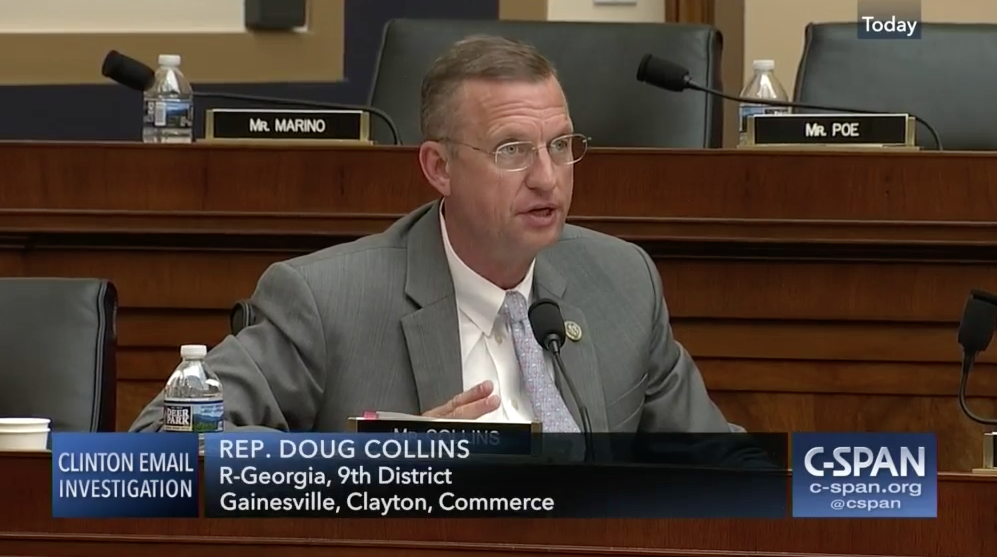 I watch shit-show hearings so you don’t need to.

And yesterday’s HJC hearing with Rod Rosenstein and Chris Wray was one of the shitshowiest I’ve sat through. I hope to do a post mapping out the cynical theater the Republicans put on yesterday, and how they succeeded in manipulating the press. But first, I want to point to the one really good point Doug Collins sort of made at the hearing.

In January 2016, Peter Strzok had an out of scope polygraph. And yet, by all appearances, he remained working on a sensitive leak investigation, then moved onto an investigation into one of the most damaging spying operations targeting the United States since the Cold War.

Let’s go back to something I asked, you and I had a conversation about a few months ago. Mr. Strzok’s issue I asked at the time did he have a security clearance. You said you would check. Now it appears that security clearance has been revoked. The concern I have again is again, process, inside the Department of Justice on what happens when you have someone of his caliber, counterintelligence level, this is not a new recruit, this is somebody who’s been around has had sensitive information. And on January 13, 2016, an individual from FBI’s Washington Field Office emailed Mr. Strzok and other employees that their polygraphs were, I think it was, “out of scope.” I asked you about that. And asked you if he had been polygraphed. You didn’t know at the time. It said the polygraph raised flags. Now, my question about this would be you didn’t know about the polygraph at the time. We just assume now that it’s out there, you do. Would the topic of extramarital affair have come up in that polygraph or possibility of extramarital affair come up to to put it out of scope?

Do you think it’s interesting you would continue to have someone in an investigation of such magnitude and sensitivity who basically had a failed polygraph or an out of scope polygraph test in which they had to then go back and re-answer or complete sensitive [sic] compartmentalized information request on this. Would they stay in that investigation? And if so were they treated differently because of his position or who he was?

Does it not strike you as strange, Mr. Wray, and I was not going here but now you’ve led me here. Does it not strike you as strange  that someone who has had an issue with a polygraph, during the investigation in which you have, in which sensitive information were coming about, in which we’ve now seen the text and other things, what would be–could they just flunk a polygraph and you just keep them on, if they could flunk questions, you keep them on sensitive information simply because that — not speaking of Mr. Strzok here, I’m talking overall policy. Is your policy just to keep people around that lie?

I get that polygraphs come close to junk science and don’t measure what they claim to measure. I get that Collins is just trying to discredit the Mueller investigation.

But if you’re going to require that cleared employees — throughout the federal government — take and pass polygraphs, shouldn’t you act when someone has an adverse polygraph? Especially if you’re the FBI, the agency that investigates everyone else’s clearance?

It turns out, FBI already knows it had a problem on this front. In March of this year, DOJ’s Inspector General completed an investigation into how the FBI responded to adverse polygraphs. Based on a review of what happened with problematic polygraph results from 2014 to 2016 — so covering the period in which Strzok’s took place — DOJ IG found that the FBI was not following protocols. Two of its findings pertain directly to what appears to have happened with Strzok. First, the FBI wasn’t always pulling people off SCI information after someone had failed a poly.

Second, we found that the FBI did not always comply with its own policy governing employee access to Sensitive Compartmented Information, classified national intelligence information concerning or derived from sensitive intelligence sources, methods, or analytical processes, which is to be handled exclusively within formal access control systems established by the Director of National Intelligence. The FBI’s policy generally prohibits access to Sensitive Compartmented Information for FBI employees who have not passed a polygraph examination within a specified period. We identified instances in which employees unable to pass multiple polygraph examinations were allowed to retain access to sensitive information, systems, and spaces for extended periods of time without required risk assessments — potentially posing a security risk to the FBI.

While it appears Strzok had just one problematic polygraph, not multiple ones, this appears to be what Collins is talking about: someone not being pulled off sensitive cases when a polygraph triggers a warning, presumably because the FBI considered them too valuable to deal with according to protocol.

In addition, when the FBI investigated failed polygraph, the IG found, the FBI’s investigators weren’t always accessing all materials available to them.

I’m not sure whether this would include reviewing an employee’s FBI communications or not, but it might (and probably should). If FBI had reviewed Strzok’s FBI texts in January 2016, they would have discovered he was conducting an undisclosed extramarital affair, the probable explanation of any finding of deception on his polygraph. They’d also have discovered that Strzok agreed with most of the country about what a buffoon Donald Trump was — which in his case would be problematic given that he was carrying out an investigation into Hillary Clinton.

In September, Michael Horowitz informed Christopher Wray of the problem, as he had immediately informed Wray of Strzok’s problematic texts.

Now, that Strzok had a bad polygraph may create problems for any affidavits that Strzok was an affiant for. If he was specifically asked about extramarital affairs in his interview, and lied about it, that lie will be used to challenge any investigative steps that he swore to. While Strzok’s not known to have been the affiant for key steps (such as the Paul Manafort warrants or the Carter Page FISA order), this could create problems for Mueller elsewhere (a point that Wray and Rosenstein admitted elsewhere).

But there’s the counterpart of this. Pulling Strzok off the Hillary investigation in January 2016 would have identified the source of his apparent deception, and led to minor disciplinary action, after which he would have been back on the beat hunting out foreign spies. Instead, his involvement in these two cases has unnecessarily discredited both of them, even though his investigative actions appear to have been defensible in both cases.

NSA — Continually Violating FISA Since 2004 Democracy Against Capitalism: The Separation Of Politics and Economics