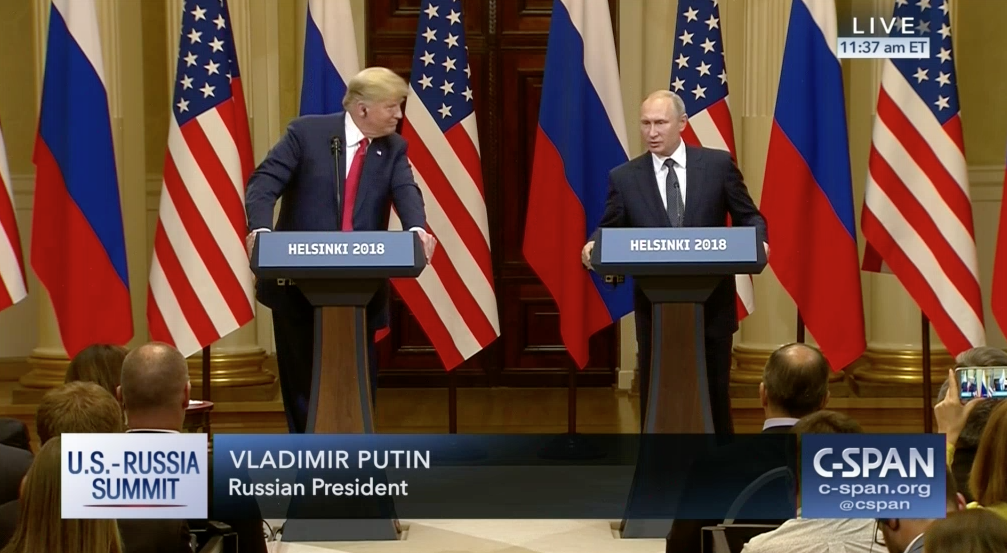 I know there are a lot of people who aren’t as convinced as I am that a clear agreement was reached between Trump’s top aides and Putin’s emissaries at the June 9, 2016 Trump Tower meeting. For doubters, however, Vladimir Putin just re-enacted the meeting on the world stage at the Helsinki summit.

On top of the denials, from both sides, of Russian tampering in the election (and both sides’ embrace of a joint cybersecurity working group), that re-enactment came in three ways.

First, when asked whether Russia tampered in our election, Putin issued a line that was sort of a non-sequitur, asserting that, “I was an intelligence officer myself. And I do know how dossiers are made of.” The line — a reference both to the Steele dossier and Putin’s more damaging kompromat on Trump — is pregnant with meaning (and probably was planned). When asked, later, whether he had any compromising information on Trump or his family, Putin said, “Now to kompromat. I did hear these allegations that we collected kompromat when he was in Moscow. I didn’t even know he was in Moscow.”

This is a reference to the pee tape, allegedly taped when he put on Miss Universe in Russia in 2013. But it’s premised on a claim about which there is sworn counter-evidence in the US. Rob Goldstone — the guy who set up the June 9 meeting — described how Putin not only knew Trump was in Moscow, but was still trying to fit in a meeting with him.

And it went down to the wire. It was on the day of the contest itself that maybe around 4:00 in the afternoon Emin called a few of us into a conference room at Crocus, and his Dad, Aras, was there. And we were told that a call was coming in through from a Mr. Peskov, who I know to be Dmitry Peskov, who I believe is a spokesman for Mr . Putin, and there’d be an answer. And the answer I think, as I may have stated the last time I saw you, was that due to the lateness o f the newly crowned King of Holland who’d been delayed in traffic, whether air or road traffic, Mr. Putin would not be able to meet with Mr. Trump. However, he invited him to Sochi, to the Olympics, and said he’d be happy to meet him here or at any future time. And that’s how it was left, so there would be not meeting taking place.

So not only did Putin lie about whether there could be a pee tape (I don’t think there is one, but I think the 2013 involves compromise in another way), but did so in a way that invoked the Agalrovs as Trump’s handlers going back years.

And did you notice that he never denied having kompromat?

Then, in a response to one of the questions about Putin’s tampering in the election, after he suggested that he’d be willing to have Mueller come to Russia to question the GRU officers who hacked Hillary, he demanded similar cooperation on his legal issues. He then raised Bill Browder (who is no longer a US citizen), complaining that

For instance, we can bring up Mr. Browder in this particular case. Business associates of Mr. Browder have earned over $1.5 million [sic] in Russia. They never paid any taxes, neither in Russia nor in the United States. And yet the money escaped the country, they [sic] were transferred to the United States. They sent huge amount of money, $400 million, as a contribution to the campaign of Hillary Clinton.

Aside from being muddled, both in Putin’s delivery and the translation, this is precisely the dangle that Natalia Veselnitskaya used to get into Trump’s campaign back in 2016 to ask to have the Magnitsky sanctions overturned.

This was simply Putin laying out his receipts of Trump’s compromise on the world stage.

There’s one other area where Putin simply showed off how badly he has compromised the President. His prepared talks emphasized cooperation on Syria, claiming it “could be first showcase example of joint work.” As I have noted, that has been the operative plan since less than 15 hours after polls closed in November 2016. And it was known by someone who played a significant role in the Russian attack.

This meeting, then, is just Putin collecting on the receipts collected back on June 9, 2016.

Dragons Caught in the Crossfire: On the Genealogy of the Current and Future... How Russian Spies Cultivated the NRA and National Prayer Breakfast to Seek Republican...