Trump Tweets a Confession, Then Sekulow Admits His Client Has Been Lying about His Involvement 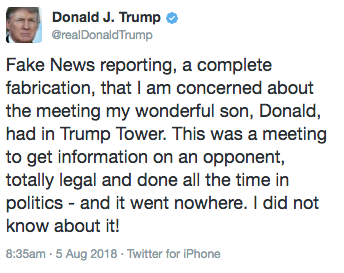 Maybe the President and his lawyers think the best way to avoid an interview with Robert Mueller is to confess to everything before noon on Sunday morning?

Amid a series of batshit tweets just now, in an attempt to rebut reporting in this story, Trump admitted that his spawn took a meeting with people described as “part of Russia and its government’s support” for his father to obtain dirt on his opponent.

Set aside, for the moment, Trump’s claims that the meeting went nowhere (for which there’s abundant contrary evidence) and that he didn’t know about it. Consider simply that this means Trump sat down with Vladimir Putin last July at the G-20, and came up with a lie to avoid admitting the fact Pops just admitted, the lie that Junior took a meeting to learn about Russian adoptions.

That’s some pretty damning admission of a conspiracy right there.

Even as the President was admitting to entering into a conspiracy with the Russian President and his envoys, his less incompetent lawyer, Jay Sekulow, went on ABC news and said,

I had bad information at that time and made a mistake in my statement, I talked about that before, that happens when you have cases like this … in a situation like this, over time facts develop.

What he means by “cases like this” and “a situation like this” are “cases and situations where your client is a pathological liar.”

Sure, Sekulow didn’t use the word liar, but he made it clear that Trump lied to him at the start, but that it was only after time (and the realization they couldn’t pull off the lie) that the White House settled on some version of the truth (stopping short, of course, of admitting that Putin helped to craft the statement).

So, at almost the same time the President’s less incompetent lawyer was on TV admitting his client lies, the President was tweeting that he did not know about the June 9 meeting.

This conspiracy trial is going to be awesome.

On the Apparent Complexities of Charging Roger Stone August 2016: When Paulie’s Panic Set In