The other day, I argued that people should stop looking for a pee tape. The kompromat that Vladimir Putin has on Donald Trump are what I called “receipts” of his willingness to engage in a conspiracy with Russia to win the election.

People are looking in the entirely wrong place for the kompromat that Putin has on Trump, and missing all the evidence of it right in front of their faces.

Vladimir Putin obtained receipts at each stage of this romance of Trump’s willing engagement in a conspiracy with Russians for help getting elected. Putin knows what each of those receipts mean. Mueller has provided hints, most obviously in that GRU indictment, that he knows what some of them are.

For example, on or about July 27, 2016, the Conspirators  attempted after hours to spearphish for the first time email accounts at a domain hosted by a third-party provider and used by Clinton’s personal office. At or around the same time, they also targeted seventy-six email addresses at the domain for the Clinton Campaign.

But Mueller’s not telling whether he has obtained the actual receipts.

And that’s the kompromat. Trump knows that if Mueller can present those receipts, he’s sunk, unless he so discredits the Mueller investigation before that time as to convince voters not to give Democrats a majority in Congress, and convince Congress not to oust him as the sell-out to the country those receipts show him to be. He also knows that, on the off-chance Mueller hasn’t figured this all out yet, Putin can at any time make those receipts plain. Therein lies Trump’s uncertainty: It’s not that he has any doubt what Putin has on him. It’s that he’s not sure which path before him — placating Putin, even if it provides more evidence he’s paying off his campaign debt, or trying to end the Mueller inquiry before repaying that campaign debt, at the risk of Putin losing patience with him — holds more risk.

Trump knows he’s screwed. He’s just not sure whether Putin or Mueller presents the bigger threat.

On Twitter yesterday, NYCSouthpaw demonstrated how this worked by noting that in his email asking Don Jr for a meeting Rob Goldstone had laid out “all the essential elements of the relevant criminal statute so clearly.” NYCSouthpaw highlighted the words, “This is obviously very high level and sensitive information but is part of Russia and its government’s support for Mr Trump,” which show that in accepting the meeting, Don Jr was accepting something of value from a foreigner. 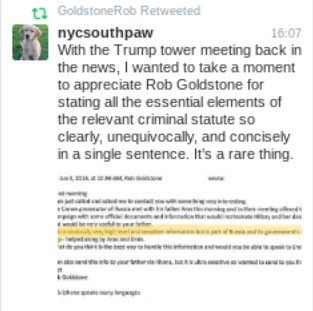 He then RTed and commented positively on a TCleveland tweet suggesting that Goldstone was only doing what he was told when he set up the meeting. 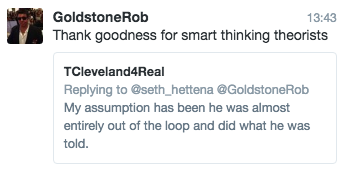 That’s actually fairly consistent with Goldstone’s (and Ike Kaveladze’s) SCJ testimony. He described Emin Agalarov telling him, over and over, that all he had to do was get a meeting with Don Jr; he didn’t even have to actually attend the meeting. Ike would coordinate once Goldstone got the meeting. And when things started getting crazy a year later, as news of the meeting came out, Agalarov repeated that Goldstone didn’t really have a role in the meeting.

Given my contention that the Russians created kompromat in the way they got Trump or his flunkies to buy into a conspiracy with a kind of call and response, however, I’m particularly interested in this exchange in Goldstone’s testimony.

Q. — you talked about with my colleague, I know we have asked you a lot of questions. I just want to have you explain. When you say there — you wrote the statement “based on the bare facts I was given,” exactly what were the bare facts that you were given?

A. So, to the best of my recollection, when I spoke to Emin, he said to me: I would like you to set up a meeting. A Russian attorney met with my — a well-connected Russian attorney met with my dad in his office, and she appears to have or seems to have damaging information on the Democrats and its candidate, Hillary Clinton. And I think it could be useful to the Trumps.

He talked about the Trumps rather than the campaign. And he would like us to get a meeting. To me, that was it. That’s when I started pushing for more information. But those would be the bare facts: attorney, damaging information, Democrats, Hillary Clinton.

Goldstone doesn’t repeat “could be useful to the Trumps” in his “bare facts” formulation. But he lays out with those words the things that Emin wanted to be included in any request for a meeting: “attorney, damaging information, Democrats, Hillary Clinton, useful to the Trumps.”

Not only were those bare facts enough to excite Don Jr, but he seemed to have some expectation about what this damaging information about Democrats and Hillary Clinton that would be useful to the Trumps would be. “If it’s what you say I love it especially later in the summer.”

Call: Russians have emails they want to release to help Trump, they’d like to discuss a series of escalating meetings

Some say the Russians won’t be reasonable. I intend to find out. If we can’t make a deal under my administration, a deal that’s great — not good, great — for America, but also good for Russia, then we will quickly walk from the table. It’s as simple as that. We’re going to find out.

Response: “If it’s what you say I love it especially later in the summer.”

Response: Here are just a few docs from many thousands I extracted when hacking into DNC’s network.

Call: “Russia, if you’re listening, I hope you’re able to find the 30,000 (Clinton) emails that are missing. I think you will probably be rewarded mightily by our press.”

For example, on or about July 27, 2016, the Conspirators attempted after hours to spearphish for the first time email accounts at a domain hosted by a third-party provider and used by Clinton’s personal office. At or around the same time, they also targeted seventy-six email addresses at the domain for the Clinton Campaign.

Goldstone is right. He did what Aras Agalarov’s son told him to do, he set up a meeting by promising, “attorney, damaging information, Democrats, Hillary Clinton, useful to the Trumps.” That he did so via email is gravy. Because (as NYCSouthpaw noted), he clearly presented the offer to Don Jr in such a way that it would fulfill all the terms of the election law statute prohibiting accepting something of value from a foreigner.

And Don Jr responded, joining a Conspiracy to Defraud the United States of its ability to enforce that election law.