Mirror Mikey on the Wall 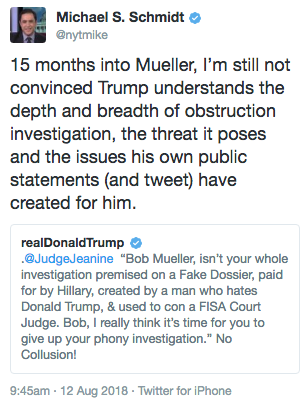 15 months into Mueller, I’m still not convinced Mike Schmidt understands the depth and breadth of conspiracy investigation, the threat it poses to Trump, and the issues Schmidt’s own public statements (and tweets) repeating White House spin claiming obstruction is the main risk have created both for the public’s understanding of the inquiry and Schmidt’s credibility as a journalist.

As I disclosed last month, I provided information to the FBI on issues related to Mueller’s conspiracy investigation, so I’m going to include disclosure statements on Mueller investigation posts from here on out. I will include the disclosure whether or not the stuff I shared with the FBI pertains to the subject of the post.

tweets from our circle
Ed Walker 🍞🌹💉💉@MasaccioEWRT @LCVoters: Henry Cuellar is Big Oil's best friend, taking almost $200,000 from them in the 2022 election cycle alone. @JCisnerosTX wil…30 minutes ago20 May 2022
bmaz@bmazOf course, there is nothing whatsoever wrong with this, opposite is given to the media in every campaign. This is r… twitter.com/i/web/status/1…40 minutes ago20 May 2022
emptywheel@emptywheelNote: DeFilippis referred to him by his real name. Everyone else has been good and used his initial. twitter.com/AGoudsward/sta…2 hours ago20 May 2022
Jim White@JimWhiteGNVSays the man who just disenfranchised many voters of color. Just fuck off with your hypocrisy. twitter.com/GovRonDeSantis…4 hours ago20 May 2022
RayneToday@raynetodayRT @wyatt_privilege: Not a mind blowing observation but the game now is to send crazy shit upstairs to scotus and invite them to remold, sc…2 days ago19 May 2022
RayneToday@raynetoday~ding-ding-ding~ Accurate. twitter.com/robinmarty/sta…2 days ago18 May 2022

Like a Rat-Fucking Stone: Russians and Roger Reading from the Same Voter Suppression... The Dossier as Disinformation: Why It Would Matter