If Mueller Shows Trump and Stone Cheated to Win the Primary, Will Republicans Turn on Trump? 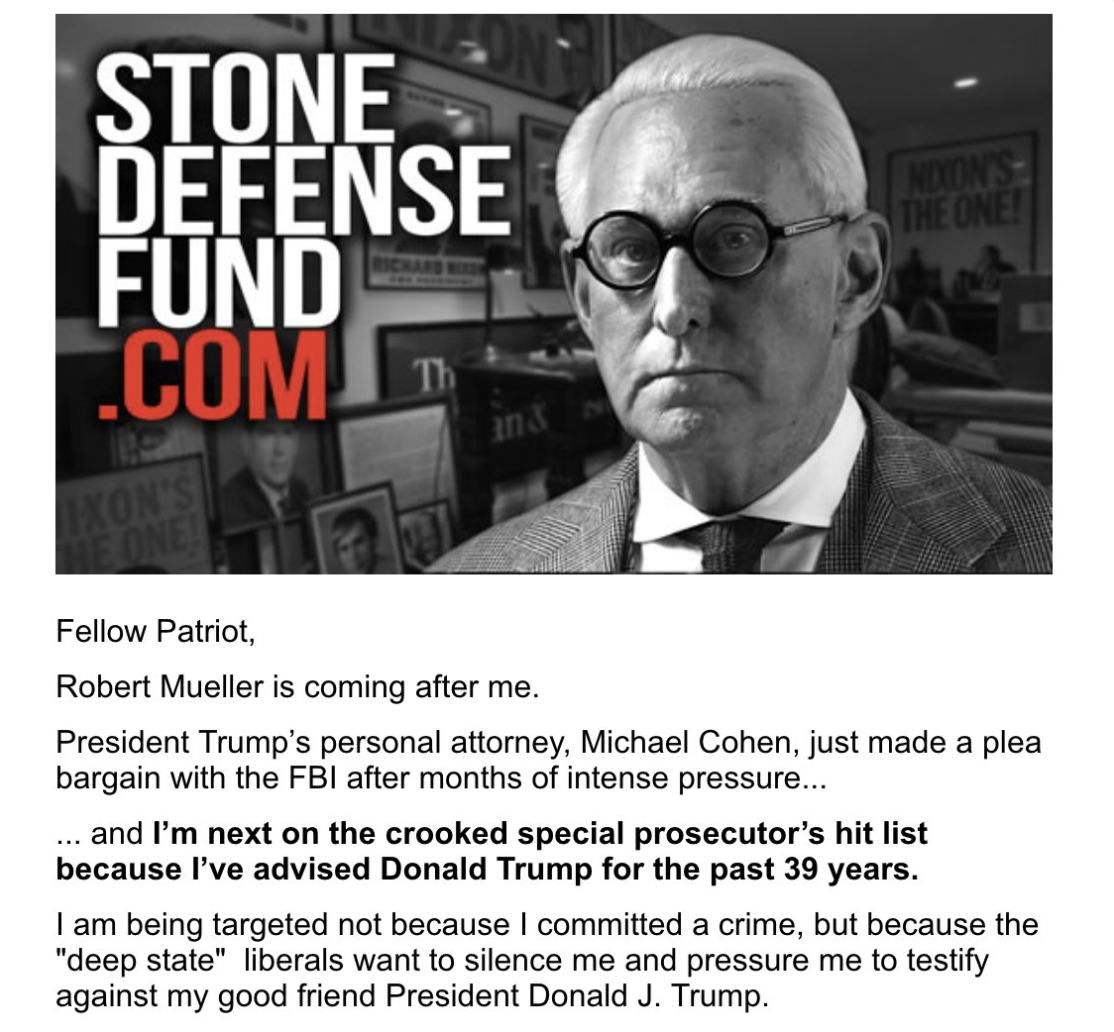 Before you answer, “no,” hear me out.

I’ve been obsessing about what else — besides repeatedly entertaining offers of help from Russians and changing his opinion about whether Russia hacked the DNC on a dime and thereafter magnifying propaganda that helped Russia’s plausible deniability, even while claiming some knowledge of it — Mueller is investigating Roger Stone. The subpoena challenge of his sometime assistant, Andrew Miller, makes it clear that at least part of the investigation focuses on Stone’s dodgy 527 and PACs. I’ve shown how the second (general election) incarnation of Stone’s Stop the Steal 527 engaged in voter suppression that paralleled the efforts Russia was making.

But we know from the reports of witnesses, including Michael Caputo, that Mueller’s interest in Stone’s activities go back before the general election. For example, he’s interested (in the wake of Rick Gates signing a cooperation agreement) in meetings Stone had with Gates. According to Stone, the only meeting he had with Gates during the election happened shortly after April 19, 2016; Gates was there because Manafort had to cancel at the last minute.

“I only have a record of one dinner with Rick Gates,” he said, adding that the guest list included two other political operatives: Michael Caputo, a former Trump campaign aide who was recently interviewed by Mr. Mueller’s investigators, and Paul Manafort, who soon after took over as chairman of Mr. Trump’s campaign. But Mr. Manafort canceled at the last minute, and Mr. Gates, his deputy, attended in his place.

Mr. Stone said the conversation during the dinner, which fell soon after the New York primary in April 2016, was about the New York State delegate selection for the Republican National Convention. The operatives expressed concern about whether delegates, at a time of deep division among Republicans, would be loyal to Mr. Trump’s vision for the party, Mr. Stone said.

The suggestion, then, is that Mueller’s star witness, Rick Gates, told the special counsel about Stone and Manafort getting the old gang back together. Which would have started in March, as Manafort was wooing Stone’s longtime associate Donald Trump. During the same month, Stone-style rat-fucking was putting the finishing touches to Ted Cruz’ presidential ambitions. That was precisely the period when former Young Republican John Powers Middleton was loading up Stone’s Committee to Restore American Greatness (from which Stop the Steal would get its initial cash infusion). Stone was tweeting out his Stop the Steal campaign, even if he had not yet registered it with the IRS. And not long afterwards, Russian hackers would still be searching Democratic servers for dirt on Cruz, even after he had been mathematically eliminated.

[O]n or about April 15, 2016, the Conspirators searched one hacked DCCC computer for terms that included “hillary,” “cruz,” and “trump.”

The possibility that Mueller’s interest in Stone (and Manafort) extends back to the primary is all the more interesting given how centrally some of Stone’s core skill-sets played out in the lead-up to the Convention. There were veiled threats of violence (and in the home of his dark money, actual violence), a smear story projecting on Cruz the infidelity more typical of Trump, and lots of money sloshing around.

It’s not entirely clear what crime that would implicate — besides potential campaign finance violations (particularly, given Trump’s repeated disavowals of any coordination between Stone and his old buddy Manafort).

And, given how rabidly Republican base voters support Trump, I could see why Republicans would let bygones be bygones. It’s not like the Republican party has ever before shown distaste for Stone’s rat-fucking. Plus, no one likes Ted Cruz, and he may not even survive his race against Beto O’Rourke. So, no, Republicans won’t be any more disposed against Stone if he is shown to have helped Trump cheat in the primary.

All that said, if Mueller indicts Stone in other crimes that Republicans would like to distance themselves from, any allegations about the primary may provide cover.

So, no, whatever dark money slush Mueller is looking at implicates Trump’s victory over the mainstream party won’t, by itself, turn Republicans against Trump. But down the road it may provide cover for the moment Republicans would like to turn on him.

February 19, 2016: Roger Stone tells Alex Jones that Donald Trump has donated to the Kathleen Willey fundraiser, even though it had raised less than $4,000 at that time

April 8, 2016: Stone accused of menacing after threat of Day of Rage

May 1, 2016: Last Stone tweet in spring Stop the Steal campaign

May 2, 2016: Stop the Steal fundraises and calls for march on Convention, even as Trump disavows any tie to it or other PACs/527s

June 2, 2016: Pamela Jensen sets up Women v Hillary PAC out of a different mailboxes location in Costa Mesa (again, this only ever showed enough money to pay for the mailbox used as its address)

August 4, 2016: Stone flip-flops on whether the Russians or a 400 pound hacker are behind the DNC hack and also tells Sam Nunberg he dined with Julian Assange; first tweet in the fall StopTheSteal campaign