Patrick Leahy just had two key interactions with Brett Kavanaugh. In the first, he made it clear that Kavanaugh had received emails that Orrin Hatch staffer Manny Miranda stole from Democrats, including Leahy himself, in 2001 to 2003 during the period Kavanaugh worked at the White House, including on judicial nominations.

In the second, he asked Kavanaugh whether he still stood by his claim not to have been involved in the authorization for Stellar Wind, Bush’s illegal wiretap program. Kavanaugh almost immediately reverted to the dodge that George Bush used when denying he had ignored FISA — referring to just a subset of the program, for which the Bush White House invented the term “Terrorist Surveillance Program.

But Leahy persisted, asking specifically about this document (see page 13; significantly, Steven Bradbury left the document off a FOIA Vaughn Index about documents pertaining to the “TSP”).

From the context of Leahy’s questions, it’s clear that Kavanaugh was in the loop on this document, even if he wasn’t on the later documents. Leahy further made it clear that he couldn’t release the underlying documents making this clear because Chuck Grassley had deemed them Committee Confidential.

That’s important for several reasons. First, I’ve been told that the NSA started implementing Stellar Wind in response to a Finding (note, this document has the same date as the Gloves Come Off Memorandum of Notification that, according to Jane Meyer, included surveillance) before the October 4 OLC memo.

I’ve also been told that NSA conducted activities that are broader than what got covered by Yoo’s later memos under that Finding. That would make this Finding parallel to the July 13, 2002 John Yoo Fax under which CIA’s torture operated (which is how CIA claimed stuff that went beyond what was approved in the August 1, 2002 Bybee Memos still had DOJ authorization).

Leahy already asked to have the documents showing Kavanaugh’s involvement in this memo released publicly. He renewed that request today.

This underlying September 17 document has never been released, so we don’t know how extreme John Yoo got. But we may soon have the proof that Kavanaugh was involved in authorizing surveillance that goes beyond the scope of what we know got authorized as the Stellar Wind program.

Update: This story from Charlie Savage makes it clear that Kavanaugh was emailing John Yoo about the precursor to the memos authorizing Stellar Wind.

Any results yet on the 4A implications of random/constant surveillance of phone and e-mail conversations of non-citizens who are in the United States when the purpose of the surveillance is to prevent terrorist/criminal violence? 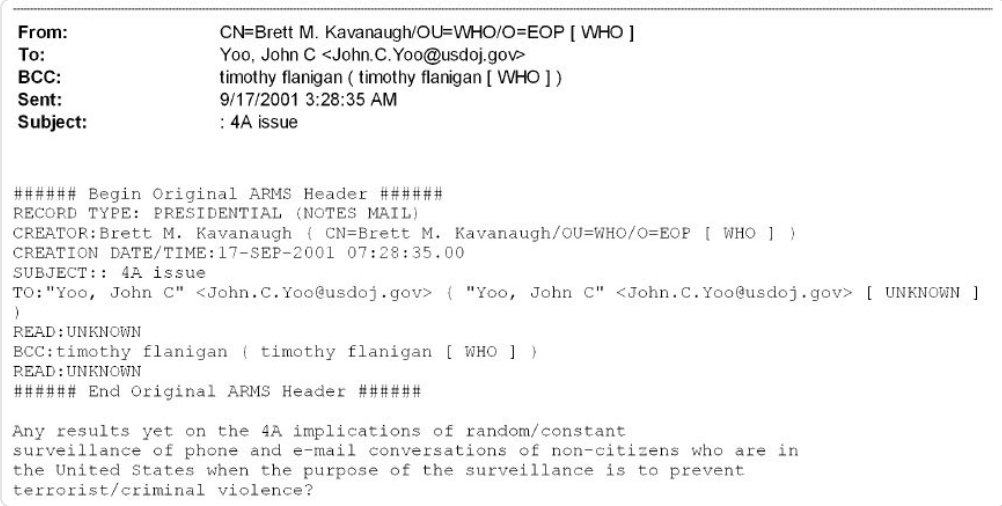