As Paul Manafort’s plea was being unveiled yesterday, a number of legal observers were shocked by how detailed the criminal information was, complete with 38 pages of exhibits. Hopefully, this will stop me from having to bitch incessantly about how many journalists have swallowed Rudy Giuliani’s claims about Mueller writing up a report. As I keep saying (and as Mueller’s boss Rod Rosenstein has said in testimony), there won’t be a report, there will be indictments.

Ostensibly, the exhibits are there to prove the assertion that Paul Manafort lied to DOJ about what kind of work he was doing for Ukraine.

Although MANAFORT had represented to the Department of Justice in November 2016 and February 2017 that he had no relevant documents, in fact MANAFORT had numerous incriminating documents in his possession, as he knew at the time. The Federal Bureau of Investigation conducted a court-authorized search of MANAFORT’S home in Virginia in the summer of 2017. The documents attached hereto as Government Exhibits 503, 504, 517, 532, 594, 604, 606, 616, 691, 692, 697, 706 and 708, among numerous others, were all documents that MANAFORT had in his possession, custody or control (and were found in the search) and all predated the November 2016 letter.

But I don’t think that’s why they’re there.

They’re there to show what Paul Manafort does when he’s running a campaign.

Because they show that for the decade leading up to running Trump’s campaign, Manafort was using the very same sleazy strategy to support Viktor Yanukovych that he used to get Trump elected.

In other words, these exhibits are a preview of coming attractions.

Take out the female opponent by prosecuting her 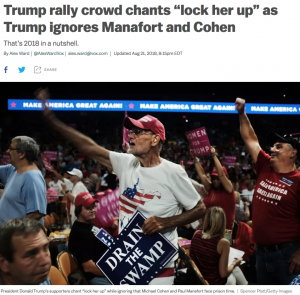 The criminal information provided far more detail about something we had only seen snippets of in the Alex Van der Zwaan plea: Manafort’s use of Skadden Arps to whitewash Yanukovych’s prosecution of Yulia Tymoshenko.

It describes how Manafort used cut-outs to place stories claiming his client’s female opponent had murdered someone.

MANAFORT took other measures to keep the Ukraine lobbying as secret as possible. For example, MANAFORT, in written communications on or about May 16, 2013, directed his lobbyists (including Persons D1 and D2, who worked for Company D) to write and disseminate within the United States news stories that alleged that Tymoshenko had paid for the murder of a Ukrainian official. MANAFORT stated that it should be “push[ed]” “[w]ith no fingerprints.” “It is very important we have no connection.” MANAFORT stated that “[m]y goal is to plant some stink on Tymo.”

And it shows Manafort seeding lies that his client’s female opponent had criminal intent when he knew there was no proof to back the claim.

MANAFORT directed lobbyists to tout the report as showing that President Yanukovych had not selectively prosecuted Tymoshenko. But in November 2012 MANAFORT had been told privately in writing by the law firm that the evidence of Tymoshenko’s criminal intent “is virtually non-existent” and that it was unclear even among legal experts that Tymoshenko lacked power to engage in the conduct central to the Ukraine criminal case. These facts, known by MANAFORT, were not disclosed to the public.

Manafort placed so much effort on inventing stories about Tymoshenko in part to take her out as a political opponent (and to create an opportunity to pitch Yanukovych’s corruption as a tolerable partner to Europe). But he did so, too, to undermine support for sanctions against Yanukovych for human rights abuses, of which Tymoshenko was the poster child.  Particularly after John Kerry replaced Hillary, Manafort undermined sanctions by promising raw material exploitation opportunities. (This bullet point, at PDF 25, is dated February 24, 2013).

We’ll learn more about what role Manafort himself played in Trump’s policy on sanctions (even aside from any quid pro quo that may have come out of the June 9 Trump Tower meeting), but we know that Trump’s view on sanctions is among the questions Mueller wants to ask Trump, and we know that in an op-ed encouraged by the Trump campaign (and highlighted to Ivan Timofeev), George Papadopoulos argued that sanctions had hurt the US.

Manafort was even using some of the very same lines that Trump still uses, such as blaming Obama for “losing” Ukraine (this quarterly memo for Yanukovych, at PDF 21-, is dated April 22, 2013).

Electoral irregularities are my opponents’ fault

Shortly after Yanukovych won in 2010, Manafort boasted that he had established a baseline to be able to claim that Tymoshenko’s complaints about election irregularities were disinformation. (This memo, at PDF 6, is dated February 20, 2010.)

Manafort also prepared a full court press to influence the electoral observers in advance of Ukraine’s 2012 parliamentary election (this document, at PDF 5, is dated as October 9, 2012 in the trial exhibit list).

One thing we’re going to see in former Manafort partner Roger Stone’s eventual indictment is a focus on the work of his Stop the Steal PAC, both just after Manafort arrived to manage the Convention, and his voter suppression efforts (which paralleled Russian ones) during the general election.

Hillary Clinton is the enemy

Finally, as early as February 2013 (see PDF 14), Paul Manafort was advising his client that replacing Hillary Clinton with someone who would value raw material deals over human rights would be a positive development.

As it happens, in 2016, Paul Manafort could please all his clients by offering a man who valued raw material deals over human rights as a positive development.