The NYT has an inflammatory article claiming that Rod Rosenstein floated recording the President and/or invoking the 25th Amendment in the days after Trump fired Jim Comey. Here’s how they describe their sources for that allegation.

Several people described the episodes, insisting on anonymity to discuss internal deliberations. The people were briefed either on the events themselves or on memos written by F.B.I. officials, including Andrew G. McCabe, then the acting bureau director, that documented Mr. Rosenstein’s actions and comments.

Not a single one of these people, by this description, was actually a witness to the episodes. Indeed, by description, none of them have even read the memos memorializing the events directly, but have instead simply been briefed secondhand.

Which means the NYT gives far, far greater weight in this story on people who are third-hand from the story than, for example, either Rod Rosenstein himself or a person who was present and issued a statement, who says this whole story takes a sarcastic comment and treats it as truth.

“The New York Times’s story is inaccurate and factually incorrect,” he said in a statement. “I will not further comment on a story based on anonymous sources who are obviously biased against the department and are advancing their own personal agenda. But let me be clear about this: Based on my personal dealings with the president, there is no basis to invoke the 25th Amendment.”

A Justice Department spokeswoman also provided a statement from a person who was present when Mr. Rosenstein proposed wearing a wire. The person, who would not be named, acknowledged the remark but said Mr. Rosenstein made it sarcastically.

All that leads the NYT to the paragraph where they let a bunch of third hand sources to the events claim this is proof that Rosenstein was acting erratically when he made the decision to appoint Robert Mueller.

[T]hey called Mr. Rosenstein’s comments an example of how erratically he was behaving while he was taking part in the interviews for a replacement F.B.I. director, considering the appointment of a special counsel and otherwise running the day-to-day operations of the more than 100,000 people at the Justice Department.

Finally, in a week where Trump is desperate to release documents that will discredit the investigation closing in on himself, Andrew McCabe’s attorney, Michael Bromwich raises real questions about how the NYT might get memos McCabe wrote documenting Rosenstein’s behavior.

His memos have been turned over to the special counsel investigating whether Trump associates conspired with Russia’s election interference, Robert S. Mueller III, according to a lawyer for Mr. McCabe. “A set of those memos remained at the F.B.I. at the time of his departure in late January 2018,” the lawyer, Michael R. Bromwich, said of his client. “He has no knowledge of how any member of the media obtained those memos.”

The insinuation is clear: in an attempt to accuse Rosenstein of things known to set off the President (notably, being recorded), someone took memos McCabe wrote and read them to people who would then leak them to the NYT.

I hope the clicks and access are worth giving third hand sources more weight than actual witnesses.

Update: And Jim Jordan pipes up, sounding very much like he could be one of the sources for this story. 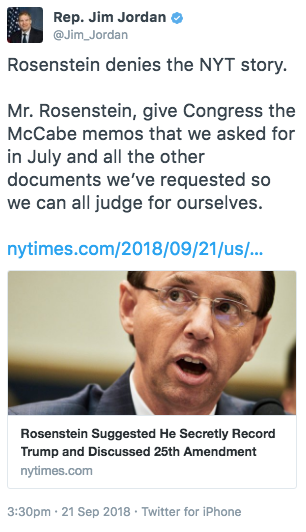 Brett Kavanaugh’s Character Witnesses: Ken Starr, Bill Shine, and Donald... The NYT “Scoop” Appears To Be an Effort to Spin Opening an Investigation...