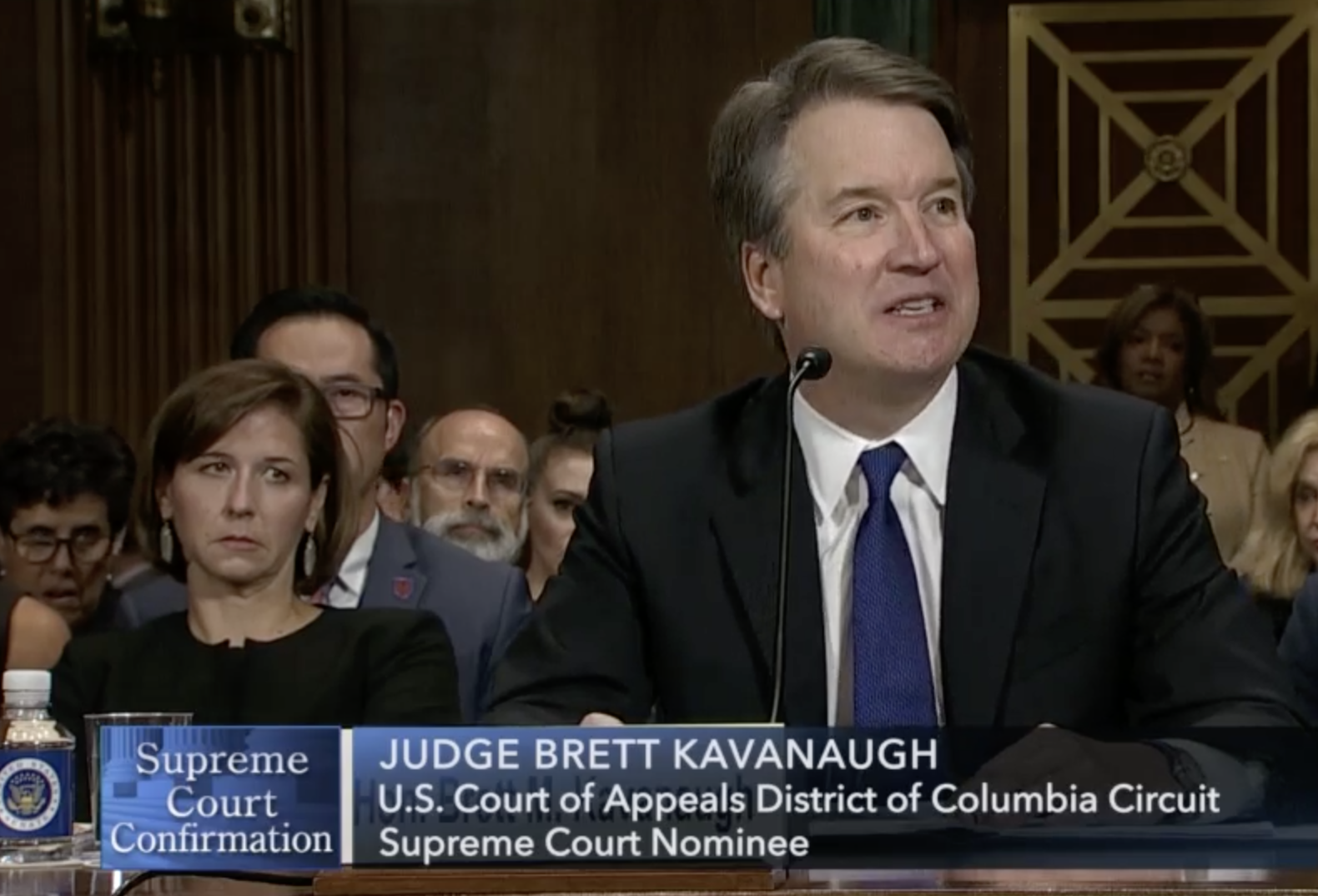 This may sound counterintuitive. But the Republican-led whitewash hearing into allegations that Brett Kavanaugh assaulted Christine Blasey Ford actually ended up supporting her case, not Kavanaugh’s.

Mitchell conducted all of the questioning — save one impetuous outburst from Lindsey Graham — of Ford. And Mitchell tried diligently to challenge Ford’s account. She started by asking Ford to review all her statements and correct and inconsistencies in her past statements, something she did not do thoroughly with Kavanaugh. She then challenged Ford’s story in a few places, first by shadowing the Ed Whelan theory that the house in question must belong to the parents of Kavanaugh’s doppelganger, Chris Garrett (later testimony would make clear Garrett was how Ford first got introduced to the Kavanaugh crowd); Ford dismissed that by answering that the house in question might be in a broader area. Mitchell tried to suggest that Ford’s symptoms — including PTSD and anxiety — might come from other reasons; but because this is Ford’s academic expertise, Ford swatted those away with science. Mitchell made much of the fact that Ford declined to travel to DC in spite of her dislike of air travel, even though she travels for a yearly family visit and vacations. Mitchell also tried to insinuate that some political actors either coached her or paid for Ford’s polygraph, but Ford’s lawyers pointed out they had paid for it, as is the norm. And Ford’s own timeline simply didn’t support the claim she was politically coached. Mitchell invented a claim, out of an indistinct claim by Ford, that she had wanted to keep her testimony confidential up until the original hearing. In the end, Mitchell got Ford to admit — relying on her expertise — that five minute sessions like this hearing weren’t the best way to get the truth from victims of trauma, which would seem to support a longer investigation, not the kind of hearing Mitchell had been paid to star in.

Ford withstood all those questions with grace (and the timely intervention of her attorneys).

Chuck Grassley unwisely let each witness take as much time as they wanted for opening statements.

After Ford took a normal amount of time, Kavanaugh, bidding for Trump’s support, took a full 45 minutes for his statement.

His statement was delivered shrilly, with an angry red face, just short of screaming. Coming after hours of testimony he was sometimes a violent drunk, Kavanaugh looked during his statement like the drunk you avoid in the parking lot of a bar, because it’s just not worthwhile human interaction. I don’t rule out him drinking while watching Ford’s testimony, nor did others.

In short, Kavanaugh looked like a guy who could not manage rage, just as numerous witnesses had described him being as as a drunk.

One reason Ford repeatedly said she’d like an FBI interview is because she assumed that if she could date an exchange she had with Mark Judge after her assault, she might be able to narrow down when the actual event occurred. Republicans want to avoid having Judge’s public comments about drunken debauchery in the time period reviewed by any credible questioner.

Judge has written about that in his book, describing working at the local Safeway for a few weeks to pay for Football camp.

According to Kavanaugh’s calendar, football camp started on August 23 that year.

Ford testified that her exchange with Judge took place 6 to 8 weeks after the incident.

Ford: We had always been friendly with one another. I wouldn’t characterize him as not friendly. He looked ill. Says it happened 6-8 weeks after the incident.

If Judge was working for the few weeks prior to Football camp to pay for it and his and Kavanaugh’s exchange with Ford happened 6 to 8  weeks earlier, that would put the assault in early July.

That would mean this entry, for an event on Thursday, July 1, 1982, in Kavanaugh’s calendar would be solidly within that range. 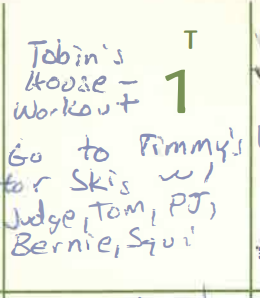 The Republicans fire their prosecutor after she corroborates Ford’s story

Start with the claim, in his opening rant, that he usually only drank on weekends. That makes no sense because Judge’s book about the period describes being dysfunctionally hungover routinely while he worked at the Potomac Safeway to earn money for Football camp.

Kavanaugh claims this had to be a weekend bc they all worked. But Judge said he routinely went to work badly hungover.

Then Mitchell started questioning Kavanaugh. She started by asking him to review the definition of sexual assault, as she asked Ford to do. Kavanaugh got a weird set to his lips.

Shortly thereafter, she turned to his calendar, getting him to confirm that he wrote everything in there. In her next round, Mitchell’s first questions were about the July 1 entry. After filibustering about the earlier workout session (about which he wasn’t asked), Kavanaugh admitted that the entry showed he got together at Tim Gaudet’s —  with Mark Judge and PJ Smith — and Chris Garrett, whose nickname is Squi.

In other words, Kavanaugh confirmed he was at a small gathering with the boys Ford said were there, as well as the guy who had introduced her to these boys.

Durbin’s questioning followed, after which Lindsey Graham took over questioning from Mitchell and went on a tear, calling it an unethical sham. Having gotten Kavanaugh to identify a get-together that matched Ford’s description, Mitchell was done questioning for the day.

Effectively, the GOP hired a prosecutor to question a victim, but decided the alleged perpetrator could not withstand the same prosecutor’s questions as soon as she had him identify a get-together that resembled the one described by Ford.

Kavanaugh thrice stopped short of denying being a blackout drunk

One problem with Kavanaugh’s testimony is that he and his alleged accomplice, Mark Judge, are reported to be blackout drunks. Judge even wrote a book admitting to the fact. So Kavanaugh went to some lengths trying to avoid admitting that he had ever blacked out, even while he admitted, “I like beer,” over and over.

The first came, in her first round, when Mitchell asked Kavanaugh what he considered too many beers.

Mitchell: What do you consider to be too many beers?

Kav: I don’t know, whatever the chart says.

Mitchell: Have you ever passed out from drinking?

Kav: Passed out would be no, but I’ve gone to sleep. I’ve never blacked out. That’s the allegation, and that’s wrong.

That’s when Republican Senators started to look worried. They gave Kavanaugh one of his three lifeline breaks.

Kavanaugh repeatedly dismissed his freshman roommate’s claim that he was a shy man who became belligerent after drinking by pointing to the squabble that one freshman roommate had with another, as if the normal animus between freshman roommates makes the observation of one invalid.

Finally, Blumenthal raised an incident from college that Kavanaugh had admitted he didn’t recall, only to have Kavanaugh insist he remembered all of it.

Let me ask you this. In a speech that you gave, you described, quote, falling out of the bus onto the front steps of the Yale Law School, at 4:45 AM.

Kavanaugh interrupted to try to prevent Blumenthal from finishing the quote.

The quote ends that you tried to piece things back together, end quote, to recall what happened that night. Meaning?

The appellate court judge actually didn’t claim that he remembered it, just that he knows what happened.

As a reminder, Ford alleges that Brett Kavanaugh tried to rape her in the presence of admitted dead drunk Mark Judge. Republicans refused to call Judge over and over.

3rd Q: Are you Bart O’Kavanaugh.

Kav finally says, “you’d have to ask him.” Which is the point.

Blumenthal noted to Kavanaugh that Judge’s statement was just six cursory and conclusory sentences signed by Judge’s lawyer, not a sworn statement.

So here’s what we saw yesterday: Christine Blasey Ford was unflappable and consistent. By comparison, Kavanaugh — at least in his statement — appeared to be precisely what he denied he was. His denials that he was a blackout drunk (and therefore that he assaulted Ford but didn’t remember it) were not credible and stopped well short of supporting his claim. And his own calendar, and the Republicans own prosecutor, identified a get-together that matches the time and attendees identified by Ford.

The GOP tried to set up a whitewash of this evidence. But instead, it failed, and they were left with screaming men.

And that won’t stop them from voting out his nomination.

Kavanaugh Hearing: The Aftermath On Squi and the 65-Lady Letter