The End Of The Airplane Trash Talk 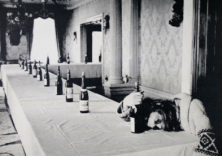 Okay, after a week of hijacking by Rayne (just kidding if you don’t get our humor here), we return you to your normal Trash Talk programming. This week is going to be a little different of format. We’ll talk sports in a bit, but the lead today is music.

I was a rather emancipated kid. I was allowed to pick out what I bought, especially as to music. But when my mother found out I had purchased Surrealistic Pillow by the Airplane, she kind of freaked. This was in late 1967 or so, maybe early 68, I can’t remember. But a woman that was totally cool with my childhood fascination with the Doors, the Airplane was a bridge too far. But I already had it, and that was that (Hendrix “Are You Experienced” and Stones “Aftermath” too; think mom may have seen a problem child early on, but didn’t stop it).

Anyway, back to the Airplane, they were one on the great, and most seminal bands ever. I am on at least my third copy of Surrealistic Pillow on wax by this point, but still have a very early version of Bless Its Pointed Little Head (as well as a newer one), the Airplane’s ground breaking live album from The Fillmore that came out a little over a year later. The Airplane rocked it up.

And, so, we come to the basis for this post today: Marty Balin has died. Now, while most people associate Grace Slick when you mention Jefferson Airplane, it was Marty Balin that founded it. Grace was not even the original female singer, Signe Toly Anderson was. It was originally Marty Balin’s band through the initial album “Jefferson Airplane Takes Off”. That was before the Slick era, but only by that first album in 1966. The Wiki on JA is fairly decent if interested in further history.

In sum, while not the Beatles or Stones, the Jefferson Airplane were the progenitors of San Francisco based counterculture rock. Crosby, Stills, Nash and Young? JA led the way. The Dead, same. They deserve a better place in history. Now the actual founder, Balin, is dead, as is co-founder Paul Kantner. Grace Slick is a recluse and Jorma Kaukonen and Jack Casady hang in as elder geniuses, but not seen much. They were all, individually, geniuses, and collectively something even better.

So, today, a remembrance for the original founder, Marty Balin. There will be two cuts to commemorate Mr. Balin. The first is “Clergy/Three Fifths of a Mile In Ten Seconds”, from Bless Its Pointed Little Head.It starts slow and then blows up into incredible rock. The second is a live song originally on the first album, Jefferson Airplane Take Off; “It’s No Secret”, with the original lineup Balin created with Signe Toly Anderson, before the singular presence of Grace Slick became the face of the band with such hits as White Rabbit and Somebody To Love. Enjoy some early seminal San Fran rock.

Alright, there are sports to be discussed too I guess. Sigh. Let’s start in the “student athlete” ranks. West Virginia and Texas Tech could be a barnburner and is just starting. I’ll take Tech in an upset. I don’t think Southern Miss can take Auburn in Jordan Hare stadium unless Brett Favre is coming in off the sideline, but it could be interesting. Penn State at Ohio State and Stanford at Notre Dame are huge national games. No good reason why, but will very gingerly go with OSU and Stanford. Said this before, don’t sleep on BYU, and today they are at Washington, that could be an excellent game. Oregon at Cal sounds important, but I just cannot get excited about it, think both are pretenders.

In the NFL, obviously the Fins at the Pats is extremely interesting. Miami is 3-0 and Pats 1-2. OMG! No laughing matter though, if the Fins can roll in and roll Brady and Bill Bel at home, there is REALLY a problem Boston. Same if the Wagon Circling Bills can ride into the Frozen Tundra and eclipse the Pack. I don’t think so, but it is really bad if so. Tampa Bay at Bears may be fascinating, will the Buccos start Rapies Winston, or the hot Harvard Hand, Ryan Fitzpatrick? Marcy’s Kittehs at Dallas is kind of curiously interesting, but not that much. Frankly, the Bronies at Rayduhs may be the biggest unknown and interesting game of the week!

In F1, the circus is in Sochi for the Russian Grand Prix, where Valteri Bottas has beaten teammate Lewis Hamilton to pole, and both ahead of Sebastian Vettel and Kimi Raikkonen of Ferrari. Where in the world has the power pace the Ferraris showed early gone?? With Ricciardo and Verstappen far back on the grid, this is Hamilton’s race, and with it almost surely another Driver’s Championship. It has gotten sad, and I am not sure the “Liberty Media era” of F1 is going to get any better soon.

That is it for today ladies and gents. Hope you enjoyed your flight on Jefferson Airways.

On Squi and the 65-Lady Letter Jeff Flake’s “Investigation” Is A Predicable Trumpian Sha...