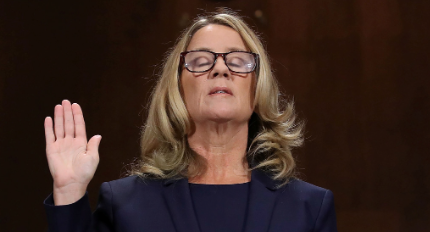 Okay, in case you have not already guessed, Marcy is away, mostly, for a couple of days. Even a prolific presence like her is entitled to that. So, you get me for today. Sorry!

Now, because I have been a little involved in trying to figure what is the “real standard of proof” for people in the shoes of, say, Susan Collins and Jeff Flake, I have been a tad predisposed this morning. But let us for now go back to Blasey Ford, Kavanaugh, Collins, Flake, Grassley and the “standard of proof”.

An executive branch nomination is NOT a criminal trial. Any talk about “presumed innocent” and “beyond a reasonable doubt” is asinine and duplicitous. There is no set standard for a nomination consideration, much less one for the Supreme Court. Senators, especially those on the screening Senate Judiciary Committee, get to make their own individual assessments. In a perverse kind of way, it is like impeachment’s “high crimes and misdemeanors”, it is easy for people to argue, but the net result is that it is whatever strikes Congress as being applicable.

Frankly, I think the argument over what Susan Collins’ standard was is kind of silly and diversionary. Collins stated on the record:

“This is not a criminal trial, and I do not believe that claims such as these need to be proved beyond a reasonable doubt. Nevertheless, fairness would dictate that the claims at least should meet a threshold of more likely than not as our standard.”

This is bullshit. As David Graham, again, pointed out:

Citing the lack of corroboration of Ford’s account as well as lacunas in Ford’s own recollection, Collins said she did not believe the “more likely than not” standard had been met.

Although she did not use the phrase, the standard that Collins offers appears to be the same as “the preponderance of the evidence,” which is the burden of proof required in civil trials—as opposed to the beyond-a-reasonable-doubt standard in criminal cases. This is also the standard that many colleges now use in evaluating sexual-violence claims under Title IX. Obama-era guidance required schools to use a preponderance-of-evidence standard, though the Trump Education Department has granted schools greater leeway, instructing that “findings of fact and conclusions should be reached by applying either a preponderance of the evidence standard or a clear and convincing evidence standard.”

So, what is the relevant standard? As propounded earlier, there is no set one in these circumstances. It certainly is not “beyond a reasonable doubt” as is in criminal trials. Anybody using that language, including most of the geriatric white geezers in the SJC, is lying.

“Clear and convincing evidence”? Nope, there is no precedent for that either. Preponderance of the evidence/more likely than not? Again, there is scant authority to establish that as a relevant standard. Bottom line is Susan Collins manufactured her own “standard” and then cynically applied it, all without any legitimate basis. And, maybe, that is the kind of intellectual malleability these SJC determinations engender, but, if so, people like Collins, and the journalists that cover her charade, should acknowledge it.

So, what is the real “standard”? Again, there is none I can find. But if the course and scope of “background investigations” conducted by the FBI at the behalf of an Article II Executive Branch request is any indication, it is far different than being duplicitously portrayed by both the White House and Senate Judiciary Republicans.

Here is a specialist in clearance and background investigation issues, Brad Moss:

Um, not totally true. It happens for high level national security operatives working for the NSC and related White House components. Those individuals have to hold TS/SCI access and often times can be subject to invasive polygraph screenings.

Actual vetting, not that Kushner BS.

Here is another, Kel McClanahan, of National Security Counselors:

If this is true, it was McGahn & not Trump who was playing games…

Yes. Exactly. And, as a Senator who was one of the maybe 115 American citizens able to actually read the “FBI Investigation” work product, for Susan Collins and Jeff Flake to blithely sign off on the limited, restricted and choked off nonsense, is beyond craven. It is straight up duplicitous. And the New York Times article is kind compared to the chicanery that was clearly afoot from Don McGahn, a close friend and Federalist Society gang member for decades with Brett Kavanaugh.

In short, it is NOT about the relative “standard of proof” used by Susan Collins. She used “more likely than not” standard (effectively a preponderance of evidence standard). When she said that was the standard, she was lying. It never has been, and never will be. That was manufactured bullshit.

People have also argued that the standard should have been “reasonable accusation” or “credible accusation”. And those are even lesser than than the preponderance/more likely than not” standard Collins artificially, self servingly and cynically utilized.

Is clearance on a Background Investigation warranted? Does anybody, including the high holy Brett Kavanaugh, have any god given right to have a clean BI and be elevated to the Supreme Court? Of course not (See Title 32 of the CFR), that is gibberish propounded by old white conservative and misogynistic demagogues, like Grassley, Hatch, Cornyn and Graham in the Senate Judiciary Committee. And it is pure rubbish.

And, so too is the manufactured “standard” Susan Collins magically announced in her drama queen dog and pony show yesterday that seemed to narcissistically go on forever.

The bottom line is that whether under Collins’ manufactured and elevated standard, or even lesser ones such as reasonable or credible allegations, Brett Kavanaugh was not fit for passage and subsequent confirmation.

As Mark J. Stern detailed in Slate, Susan Collins’ manifesto announced with all the drama of a royal wedding, was in incredible bad faith. Her “standard” was nonsense and nowhere close to any applicable standard. It was a joke.

But, even more so, under ANY standard Susan Collins could have cited, her “finding” thereunder was garbage. Even in criminal sex cases, not just occasionally, but often, finders of fact (usually juries), decisions come down to weighing the relative credibility of an accuser versus the accused. And, given the relentless series of outright lies Brett Kavanaugh stated under oath, there is no way that a sentient human could see his testimony as more credible than the measured, and admitting as to gaps, honesty of Dr. Christine Blasey Ford. And, again, credibility of witnesses is what criminal trials, much less less than even civil litigation burdens, as here, are decided by every day.

This is because there are usually zero other witnesses to such kidnapping, molestation and attempted rape cases as Dr. Christine Blasey Ford credibly alleged, but also because time and reticence of victims is often a factor. And, yet, cases are filed and determinations made on just such “he said/she said” allegations every day. The implication by Susan Collins, Chuck Grassley, the other wrinkled old entitled white men like Hatch in the SJC, not to mention their cynically hired criminal prosecutor, Rachel Mitchell, are complete baloney.

Somebody go ask Rachel Mitchell, and the sad old men that hired her before they fired her, how many times she has operated off of an accuser’s words. The answer will be a lie, because it happens all the time. And, yeah, that is enough to generate a full and meaningful “background investigation” despite the bullshit being proffered by the White House, Don McGahn and the SJC.