A Roadmap to the Nixon and/or Mueller Roadmap 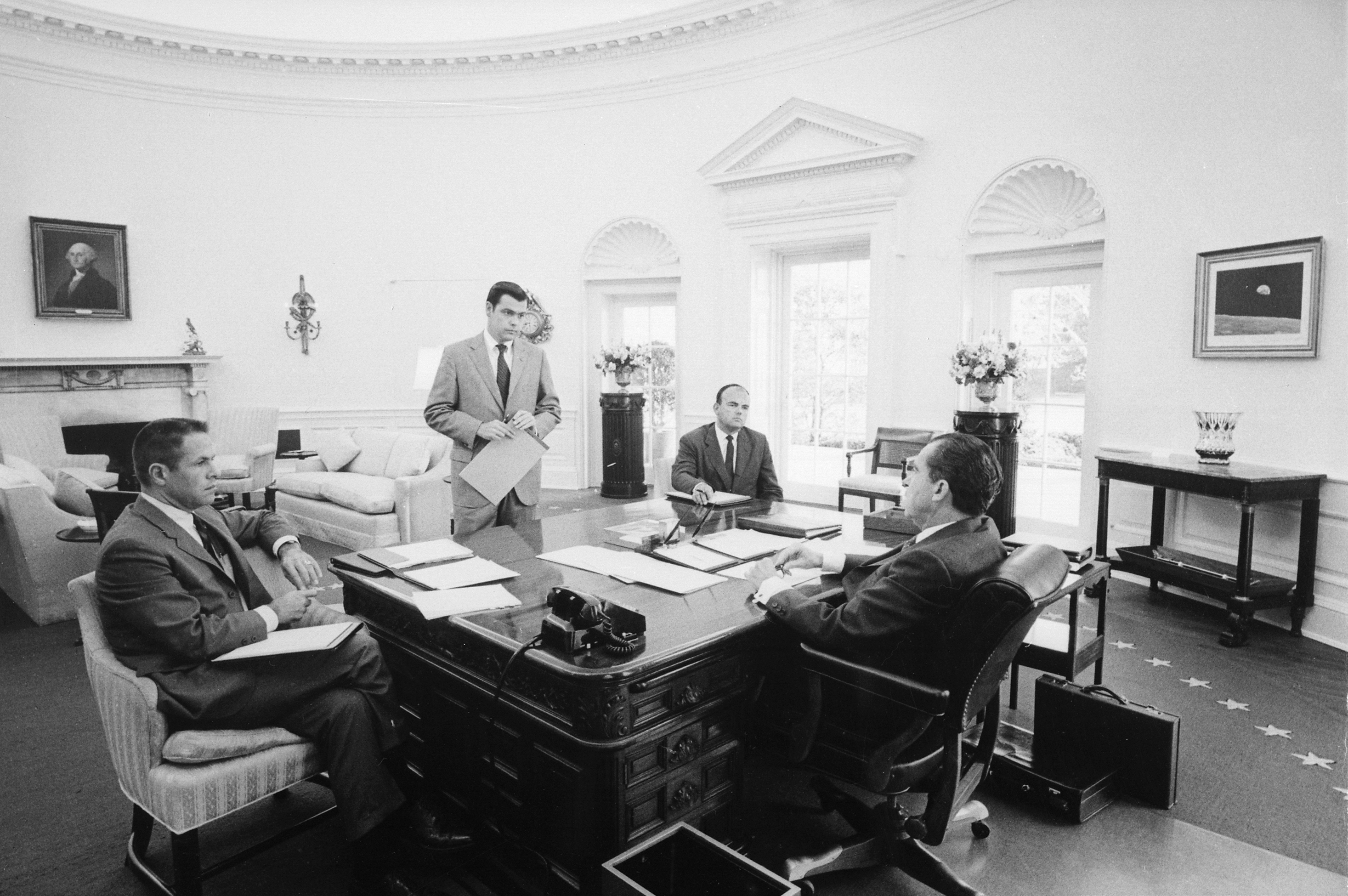 The other day, I noted that the Roadmap being FOIAed by Ben Wittes and friends and previously FOIAed by Geoffrey Shepard might serve as a guide, of sorts, for the kind of report Robert Mueller might write such that it could easily be shared with the House Judiciary Committee, particularly in case Mueller got fired.

This week, the National Archives released all parts of the road map they’ve been able to map to previously public items; the FOIAs continue for the grand jury materials not previously released. Lawfare did this post on what got released.

I’m going to lay out what got released. Some of this had already been released, but in this post I’m going to lay out how it all relates together, with an eye towards what we know is going on in the Mueller investigation right now. My treatment here is not in the order that NARA has released them; I’ve rearranged them to show how the Special Prosecutor kept a running memo of what evidence there was against Nixon, which led to an attempt to get Nixon’s testimony, which led to a draft indictment, which led to the Road Map packaging up the evidence behind the indictment to send to the House Judiciary Committee.

I’m not going to deal with the negotiations on the grand jury materials; I may return to that in the future. My goal here is to show how investigative materials — including some that were not evidence of a crime but were evidence of Presidential bad faith — got packaged up to send to the House Judiciary Committee. I’ll do a follow-up post with more observations on what this might tell us, if Mueller is following this road map.

Starting in June 1973, before Cox was fired, he started pulling together all the evidence against Nixon.

This draft memo from August 1973 includes examples of Nixon’s evolving story about whether he knew of CREEP and the break-in in advance, about efforts to impede the FBI investigation (including by calling Patrick Gray to weigh in), about offers of clemency, all of which are similar to what I’m sure Mueller has about Trump’s knowledge in real time of the Russian operation.

The memo lays out what circumstantial evidence there is to support he did have foreknowledge, in some cases referencing the evidence directly, in others pointing to where the evidence would be. At one point it states the old adage, “what did the President know and when did he know it,” this way: “it would be important to know whether, and precisely when, the President may have known about the payoffs.” It clearly labels what is supposition or circumstantial and in places describes what would need to be established to substantiate foreknowledge of something.

The evidence cited includes grand jury testimony, Senate testimony, paperwork, and the press (for witnesses’ public claims). As evidence of some things, it describes “discrepancies between his public statements urging a full investigation and claiming such an investigation had been conducted, and the President’s actual failure to cause a thorough investigation to be made or assure that one was being made.” (33)

We joke about Mueller having a file of all Trump’s incriminating tweets, but a memo like this is probably how the Mueller team keeps running track of what solid evidence, circumstantial evidence, and exculpatory evidence against Trump they have.

This is a finalized version of the above with a cover memo giving credit to the people who worked on each section.

There are three subsections here, without an introduction. I’ll deal with them out of order.

The more interesting part of these communications, for current purposes, show the Special Prosecutor’s Office negotiating for Nixon’s testimony and considering whether to present interrogatories — what I call an open book test — to him. These are the kinds of negotiations we know to be going on right now between Mueller’s team and Trump, surely using some of the very same arguments.

While by January 29, 1974, the Special Prosecutor had decided against giving Nixon questions to answer under oath, the correspondence does include efforts to get each of the task forces (note, Mueller’s team appears to be organized into task forces as well) to come up with the interrogatories they would pose to the President in January 1974, as in these questions about investigations of people on Nixon’s enemies list. 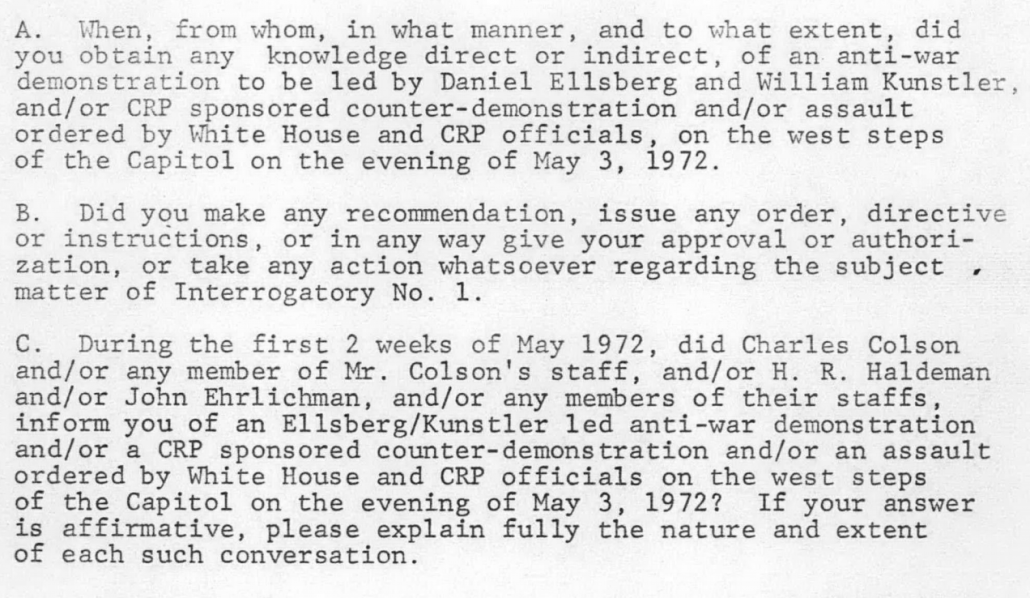 We just have the interrogatories from two task forces, which amount to around 31 questions. Remember that by March, Mueller’s team already had over 40 questions for Trump, though they had not, as far as we know, yet presented them as formal interrogatories to him. Trump has reportedly finished the interrogatories Mueller gave him, but he’s sitting on them until after Tuesday’s election.

Starting in September 1974, the Special Prosecutor paperwork turns to obtaining Nixon’s testimony, leading through the generation of questions for ultimate his 1975 questioning.

A. Communication from the Grand Jury to Nixon

Then there are communications from the grand jury to Nixon, both in this early 1974 period and in 1975 when they actually did get his testimony. Most remarkably, on January 30, 1974 (the day after the Special Prosecutor had given up on interrogatories), the foreperson, Vladimir Pregelj, wrote Nixon describing why they needed his testimony. Note how he describes that prosecutors would soon make recommendations about “major phases of our investigation.”

B. Nixon’s communications with the Special Prosecutor

Finally, there is Nixon’s side of the communications with the Special Prosecutor’s office, including their explanation in September 1974 of why Nixon could never get a fair trial. This correspondence is less interesting (to me, at least), but Rudy Giuliani has probably used some of it to model his memo of why Trump shouldn’t be investigated.

Draft Indictment of the President, February 1, 1974

As much as anything else, I’m fascinated by the date of the indictment Jaworski’s team drafted: February 1, 1974. This shows that shortly after giving up on the idea of presenting interrogatories to Nixon, two days after the jury foreperson said the Special Prosecutor would soon present recommendations to the grand jury, and at a time when the Special Prosecutor was still fighting the President’s lawyer’s efforts to avoid testifying, Jaworski’s team had a draft indictment.

The indictment charged four crimes — bribery, conspiracy, obstruction of justice, and obstruction of a criminal investigation. While it was originally titled US v. Nixon, an edit suggested it should be In Re June 5, 1972 Grand Jury, the investigation actually obstructed.

On top of introducing Nixon and the FBI, the introduction of the indictment describes the burglary the investigation of which Nixon obstructed. Then, Count One uses five paragraphs to describe generally how the conspiracy worked. Paragraph 11 lays out three actions Nixon took on March 21, 22, and 23, 1973 (basically, ordering payment to Howard Hunt). Then paragraph 12 and a series of numbered paragraphs thereafter lay out the 9 overt acts behind the conspiracy.

The remaining Counts restate the underlying act — bribing Hunt — and tie it to the other crimes.

There are an additional 9 redacted pages that were deemed protected grand jury materials (this stuff might get unsealed depending on the outcome of an appeal before the DC Circuit right now).

From there, the road map includes a bunch of stuff not included in the indictment:

29 through 43: Nixon’s foreknowledge of dirty tricks and the coverup up to March 17, including the missing 18 minutes, and immediate response to Watergate, including offers of pardons 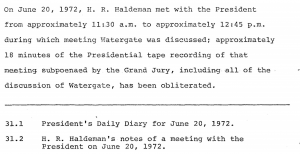 44 through 53: Nixon’s lies about wanting an investigation