In Defending His Whitaker Pick, Trump Attempts to Placate Both Republicans and Lawyers 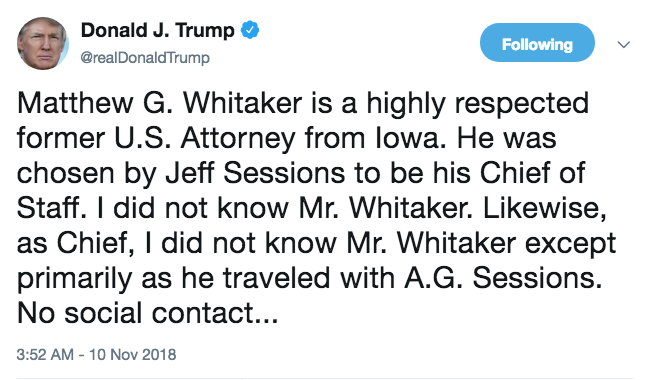 President Trump flew all the way to Paris to (as far as we know) sit in the US Ambassador’s residence rather than attend the World War I remembrance he had flown all that way for. The stated reason was weather — basically some light drizzle in 50 degree temperatures.

I’m reminded that the other most prominent time Trump inexplicably blew off a high profile international event — when he had Ivanka sit in for him at the G-20 in July 2017 — he used the time instead scrambling with aides about how to craft a story about the June 9 meeting.

Given the way the Matt Whitaker appointment is blowing up — on top of persistent questions about the legality of the appointment, stories about the criminal investigation into his firm, (sketchy) claims that the White House knew nothing about his comments or past when they picked him, and additional reports of Whitaker’s radical legal belief, including that states can nullify federal law — I suspect he may similarly be huddled somewhere trying to prevent the Whitaker move from making his plight worse than it already was. (Though he’s demonstrably also working the phones in hopes of squeezing an extra Senate seat out of the process.)

Which is why I’m interested in the two tweets Trump made on the topic last night. 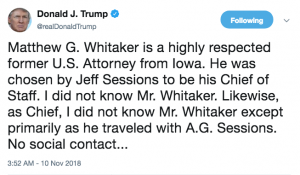 Yes, his claims here are narrower than the ones already debunked by his statements on Fox News the last time he tried to install Whitaker. He now admits to knowing Whitaker. But he falsely pretends that Sessions, not the White House, picked Whitaker. And he suggests, incorrectly, that he and others at the White House (including, per the NYT, Don McGahn when he was looking for an attack dog to work Trump’s defense) didn’t have direct contact with Whitaker.

President Trump first noticed Matthew G. Whitaker on CNN in the summer of 2017 and liked what he saw — a partisan defender who insisted there was no collusion between Russia and the Trump campaign. So that July, the White House counsel, Donald F. McGahn II, interviewed Mr. Whitaker about joining the president’s team as a legal attack dog against the special counsel, Robert S. Mueller III.

The decision to fire Mr. Sessions and replace him with Mr. Whitaker had been in the works since September, when the president began asking friends and associates if they thought it would be a good idea, according to people familiar with the discussions.

The goal was not unlike the first time the White House considered hiring Mr. Whitaker. As attorney general, he could wind down Mr. Mueller’s inquiry like the president wanted.

Mr. McGahn, for one, was a big proponent of the idea. So was Leonard A. Leo, the executive vice president of the Federalist Society who regularly advises Mr. Trump on judges and other legal matters. Mr. Whitaker had also developed a strong rapport with John F. Kelly, the White House chief of staff. Nick Ayers, Vice President Mike Pence’s chief of staff, was a fan, too.

A team that has spent over a year claiming intermittently that Robert Mueller has a conflict because he interviewed to be FBI Director the day before he got named Special Counsel has made a guy who interviewed to be part of his defense team Attorney General.

All this creates an overwhelming appearance of a conflict, one DOJ’s ethical advisors — if they get the opportunity — would surely say disqualifies Whitaker from overseeing the Russian investigation.

So Trump, with his first tweet, is making false claims to try to deny these conflicts. It’s an appeal to lawyers — ethics lawyers at DOJ, constitutional lawyers questioning the legality of the appointment, and probably Mueller’s lawyers, who’ve been Hoovering up evidence relating to this latest obstruction of justice. This is the kind of performance tweeting Trump does all the time. It has no legal value — the lawyers he’s trying to influence will instead work with actual evidence — but it might lead his supporters to overlook egregious conflicts.

I’m more interested in his second tweet, posted 12 minutes later, touting that Republicans — most who worked or fought campaigns with him in IA — think highly of him. 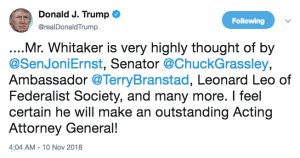 Along with selling lawyers a lie, it seems, Trump feels the need to assure fellow Republicans (in the wake of losing many suburban women voters in part because of the Brett Kavanaugh confirmation process) that it will be worth fighting for Whitaker. Sure, Iowa politicians matter for anyone thinking of running for office. It definitely helps that the Chair of the Senate Judiciary Committee has driven to all Iowa’s counties with Whitaker.

But the key validator here, of course, is Leonard Leo, who has been pushing Whitaker as part of a defense strategy. That is, Leo is not (yet) pushing Whitaker to be a judge, though I think it likely that’s how he expects to be paid off, which makes Leo’s involvement even more suspect. For now, though, Leo is instead pushing Whitaker to help wind down the Mueller probe.

And Trump wants fellow Republicans, who just got shellacked in the House and may not even extend their advantage in the Senate, to risk political capital to defend Whitaker, all the while blowing up a half century of conservative beliefs about appointments.

Yet, even with these two bids to placate two different audiences about the Whitaker move (and all the related bullshit about not knowing what a hack Whitaker is), Trump simply doesn’t address all the glaring problems with Whitaker, starting with the question about whether the appointment is even legal.

It’s always a mistake to underestimate Trump’s survival ability, and it may be that he’ll find a way to persuade the two audiences he’s trying to reassure that Whitaker is worth the risk.

But these tweets suggest a heavy-handed move he probably imagined would bring him salvation has just added to his headaches.

The Kremlinology (Ha!) of the Sessions’ Huddle Dear Lindsey: Not Even Trump Gives a Shit What You Think about the Whitaker...