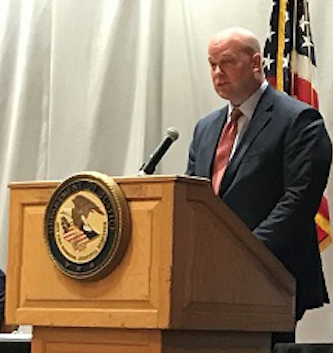 I’ve followed the burgeoning scandal that the guy Trump appointed to play hatchet man to Mueller’s investigation is totally unqualified to be Acting Attorney General. But I’ve already lost track of all the reasons why. So I’m going to try to keep a running list here.

This will be updated as new issues are identified.

Legal problems with the appointment

While Steve Vladeck says it’s legal, and Marty Lederman and Walter Dellinger find OLC’s analysis, concluding that Matt Whitaker’s appointment is legal, to be plausible, a number of commentators disagree. Those include:

These arguments include a mix of constitutional (Appointments Clause) and legal (Vacancies Reform Act and the purpose of DOJ).

Numerous people are already challenging his appointment, including the state of Maryland, three Democratic Senators, and a number of criminal defendants. Quinta Jurecic is collecting all the litigation documents for those challenges here.

David Kris points out that because of the legal questions surrounding Whitaker’s appointment and the certainty that defendants will challenge it, his appointment will create a whole bunch of downstream problems for DOJ.

A company for which Whitaker served on the board is under investigation by the FBI and FTC. Though Whitaker was subpoenaed by the FTC, he blew off that subpoena. FOIAed records show that Whitaker kept pitching the company even after receiving complaints.

One report on Trump’s efforts to get DOJ to prosecute Hillary Clinton and Jim Comey describes Whitaker prepping discussions about what it was doing in response; he reportedly “did not seem to cross any line,” but it remains to be seen whether that’s true.

Whitaker got four donations amounting to $8,800 to his 2014 Senate run in 2018, after he had started as Sessions’ Chief of Staff, which may amount to a violation of the Hatch Act. Following a complaint from watchdog group American Oversight, the Office of Special Counsel (the DOJ office in charge of reviewing such violations, among other things) opened an investigation into this.

There may be problems with the way that Whitaker was appointed.

As numerous people have noted, Jeff Sessions did not date his resignation, raising questions about when his authority really passed to Whitaker. (OLC says Sessions resigned on November 7.) Democrats in the House are also suggesting they believe Sessions’ forced resignation counts as a firing, which changes the options Trump would have to replace him under the Vacancies Reform Act.

Chris Geidner has reported that the White House won’t say when Whitaker was formally appointed.

Because Mueller has sought an interview with John Kelly (indeed, he’s a leading candidate to be the Mystery Appellant challenging a subpoena or something else from Mueller), it may be problematic that he played a key role in firing Jeff Sessions.

Whitaker has a potential conflict with regards to the Mueller investigation tied to his relationship with Sam Clovis, who was in charge of crafting Trump’s outreach to Russia. Whitaker served as Clovis’ campaign manager in 2014.

Then, in a series of appearances Whitaker used to draw Trump’s attention, he commented on the Mueller investigation or the underlying conflict.

In a USAT column on July 5, 2016 and then multiple appearances on July 6, Whitaker suggested Hillary should have been prosecuted, partly by criticizing Jim Comey for making the decision.

On September 30, 2016, Whitaker suggested that if Trump won, he should restart the investigation into Hillary.

On May 19, 2017, Whitaker dismissed the possibility that Trump had committed obstruction of justice by firing Comey.

In July 2017, Whitaker interviewed with Don McGahn to take on the role of legal attack dog discrediting the Mueller investigation.

In a CNN interview on July 26, 2017, Whitaker described how you could defund the Special Counsel and thereby end his work.

I could see a scenario where Jeff Sessions is replaced, it would recess appointment and that attorney general doesn’t fire Bob Mueller but he just reduces his budget to so low that his investigations grinds to almost a halt.

On July 27, 2017, Whitaker said it would be a mistake to provide Mueller any further protection.

On August 4, 2017, Whitaker recommended an article that describes, “with a little planning he could install a true believer to a political position at DOJ—as a sleeper agent—and then (after easing out Sessions) elevate him or her to attorney general.”

On August 11, 2017, Whitaker suggested the investigation into Paul Manafort was outside the scope of Mueller’s appointment. In that same appearance, he suggested Mueller had engaged in prosecutorial misconduct.

On August 15, 2017, Whitaker said Mueller’s appointment was a little fishy.

On August 25, 2017, Whitaker suggested searching Manafort’s condo with a dozen agents was designed to intimidate him.

On August 30, 2017, Whitaker suggested Mueller’s investigation was politically motivated and was misusing resources that should be used elsewhere.

In spite of the fact that many of these would seem to pose conflicts that DOJ normally concludes would ethically prohibit Whitaker’s involvement in the Mueller investigation, both Trump and Whitaker appear to have known he would not recuse from the Mueller investigation even before he was appointed, though Trump has claimed (evidence to the contrary) that he didn’t talk to Whitaker about such things before he appointed him.

As noted by CREW when they released Whitaker’s financial disclosures, his disclosures got doctored (or “Kushnered,” as I’m now referring to serial attempts to belatedly fix glaring problems in official disclosures) four times after the time he was appointed AAG. 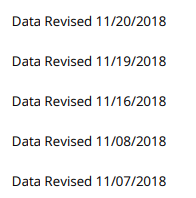 CREW has already filed a FOIA for those revisions.

What the records show is just as alarming.

The non-profit Whitaker worked at to, first, beat up Hillary Clinton and then audition to kill the Mueller investigation, Foundation for Accountability and Civic Trust, has obscure funding and genesis. It keeps changing its name. Whitaker’s salary, which went from $63,000 for part time work to $660,000 a year, made up most of its expenditures in the period before he became Sessions’ Chief of Staff. One of the guys listed as a director, James Crumley, claimed not to remember its existence. Another, Noah Wall, didn’t know he was listed as Director. While claiming to be non-partisan, it overwhelmingly attacked Democrats (and Hillary specifically), a possible violation of IRS regulations. As OpenSecrets notes, its funding comes from a black hole pass through, but the organization seems to have ties to other judiciary-related dark money groups.

The 14 companies in Iowa Whitaker worked for (reportedly, past tense) have never filed paperwork noting that, so on paper he still works for them.

In 2016, Whitaker abandoned a taxpayer-funded apartment rehabilitation project, defaulting on loans and hiding from creditors.

World Patent Marketing — the company the FBI is investigating — was totally fraudulent, pretending to help review patents without doing so. Among those the company defrauded are veterans. Among the things it marketed were Big Dick Toilets, Sasquatch dolls, and time travel.

Abuse as (or invoking past history as) US Attorney

Whitaker has already abused his position as a government prosecutor, both while serving and since.

In 2006, he prosecuted a Democratic politico, Matt McCoy and even paid an informant to incriminate him. The jury acquitted McCoy after deliberating for just 25 minutes.

Then, when serving on the advisory board for a World Patent Marketing, he threatened people who complained, including threatening them with legal retribution.

Both on his legal views and his other beliefs, Whitaker has a temperament far outside the mainstream.

When running for Senate, Whitaker argued that judges should have a biblical view and said that Marbury v. Madison — the foundation of judicial review in this country — was among the worst Supreme Court decisions.

He was among the US Attorneys who imposed the harshest sentences in drug prosecutions.

Update: Since it has attracted a lot of attention, I owe this title in part to HowdyQuicksell, but the Dog Catcher accusation (which will probably ensure no DOJ spox will ever again return my calls) is my own.

It Is Objectively False that Trump Provided Unprecedented Cooperation; Stop... Giving Thanks