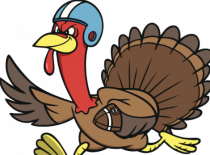 Happy Thanksgiving to one and all, and we here give thanks for you joining with us and participating here. There are not many real remnants of the old blogosphere and commentary community left these days, and it still flourishes here, thanks to you. I was lazy this morning and am just now writing Turkey Trash, but Marcy has already posted the annual sister Food and Thanks Post, make sure to visit there too.

Okay, off we go. Thanksgiving has always been about football. Every year through college, law school and many years after, we had a Turkey Bowl. It was played among a bunch of us who played intramural flag football in college, and sometimes friends who actually played real college football. I even one time tried to recruit Pat Tillman, but he just laughed and said there was no way he was risking injury doing that. He was smart, I think there were more injuries to extremely hungover dudes in the Turkey Bowl than there would have been playing in full pads. Plus he would have hurt us. Game was always at 10:00 am at a local high school that would let us use their field. Stunned that none of us ever got a DWI driving to the game.

Okay, on to the games. First up is Chicago at Detroit. A week ago, this looked like another Kitteh mismatch for Thanksgiving. But Bears starting QB Mitch Trubisky is out and career backup Chase Daniel will be leading the charge. Daniel is a very decent backup, but has started just two games in his ten year NFL career. The Lions sure seem to have the edge here with Matt Stafford and, ahem, an improved running game lately (though Kerryon Johnson and Marvin Jones, responsible for that, are out). But Khalil Mack and the new Midway Monsters will be a problem. No clue, I rate it a toss up, even if Vegas likes Da Bears. The Bears defense may warrant that.

The second game is Redskins at Cowboys. Believe it or not, as horrible as the Cowboys have been to date this year, they will be atop the NFC East, tied with Washington, if they win this home game. On the other hand, the Skins will take a substantial lead if they win at Jerryworld. Speaking of starting QB’s out for Turkey day, Alex Smith is very out. Closest thing to Joe Theismann’s leg injury, eerily on the same exact date as Smith’s injury, but in 1985. Colt McCoy takes over for the Skins in a really important game. McCoy is not a bad choice if you have to have a backup suddenly starting. Should be interesting. Look for Washington to run Adrian Peterson hard against a Dallas defense that is not so good against the run. Look for Dallas to throw everything at Peterson. Should be interesting, and is yet another tossup.

Last game is tonight with the Falcons visiting the Saints in Nawlins. This one is NOT a tossup, the Saints have to be a heavy favorite. They are home in the loud and crazy Superdome, Drew Brees is having an MVP year and is simply on fire, and the Saints are putting up ridiculous numbers on offense. The Dirty Birds have been extremely disappointing so far. Sure Matt Ryan can still get hot and light em up, but do they have enough to keep pace with Brees, Michael Thomas, Alvin Kamara, Mark Ingram and the entirety of the Saints’ offense. Nope.

Since today has been a little sleepy already, gonna rock it up with a little Silke Berlinn and The Addictions doing a cover of the old Nancy Sinatra hit Jackson. By the way, that is our old friend John Amato, founder of the Crooks and Liars blog, honking magnificently on the tenor sax. Enjoy your food, enjoy your drink, and most of all enjoy the people around you today.

Giving Thanks Pence Plays Statesman While Trump Tweets Angrily from a Florida Retirement ...